2015 was not a great year for Android devices. Snapdragon 810’s problems with throttling severely crippled the performance of high end smartphones. In the case of the OnePlus 2, OnePlus went even farther by putting in code that would detect when Google Chrome was in use and completely shut off the A57 cluster on the SoC. This resulted in web browsing performance that was essentially no better than what you’d find on a $100 phone shipping with Snapdragon 410, which simply wasn’t acceptable given the fact that the OnePlus 2 was priced at around $400.

Like most of this year’s flagship Android devices, the OnePlus 3 uses Qualcomm’s Snapdragon 820 SoC. We looked at Snapdragon 820 not long ago in the LG G5 review and saw that it provided a substantial improvement over Snapdragon 810, which became even greater when you consider prolonged workloads where Snapdragon 810’s A57 cores throttle down and shut off. Given that OnePlus no longer has any reason to put in strange app detection code to manage thermals, we should see a good uplift in general performance and an enormous improvement in web performance. 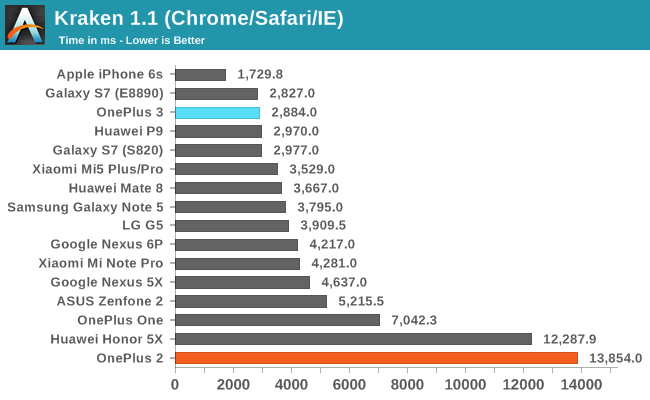 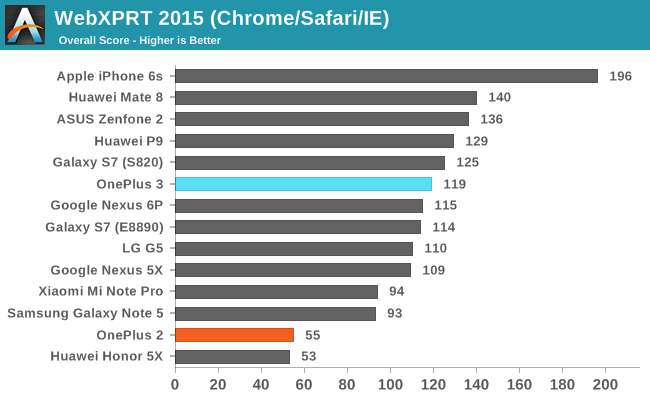 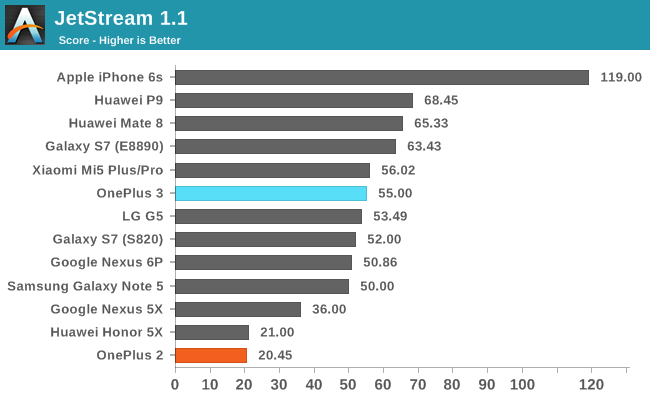 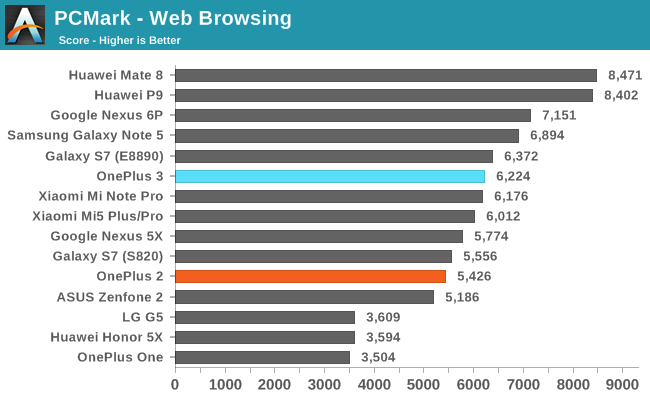 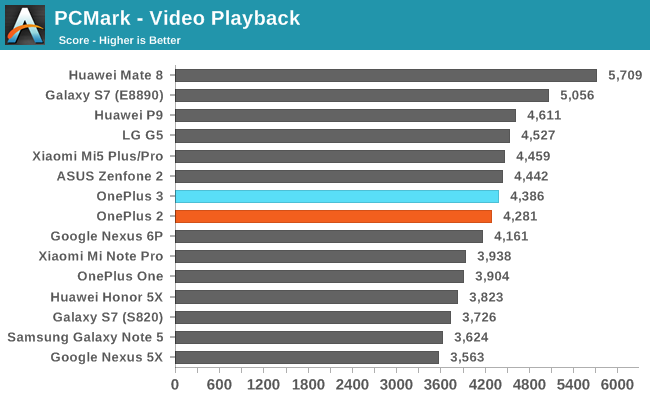 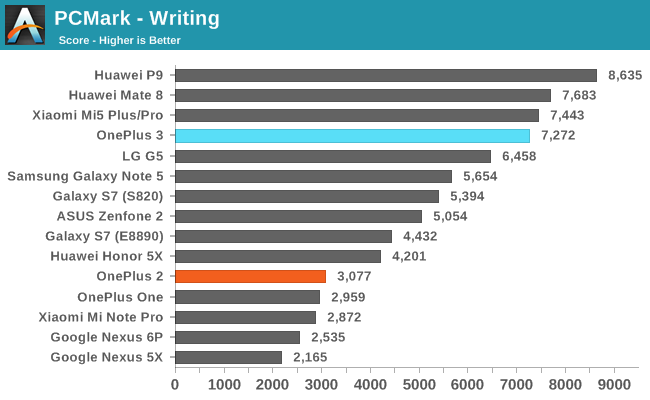 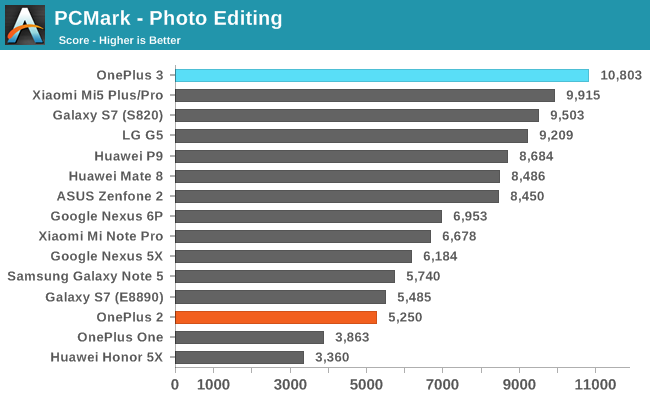 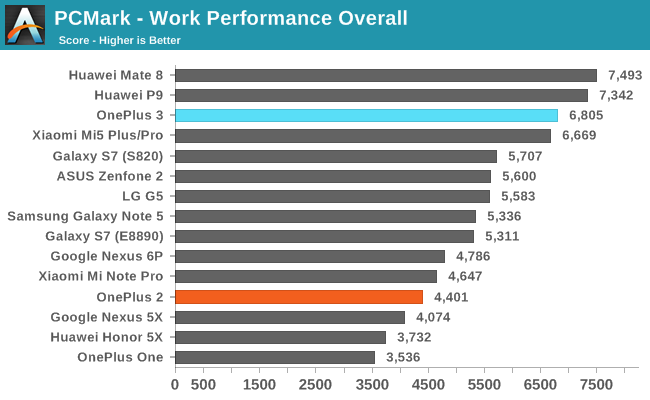 PCMark is an interesting test because it depends just as much on a phone's software as it does on the hardware. We've seen how devices with the same SoC can perform very differently, especially in certain sub-tests like the Writing and Photo Editing tests where different runtime and OS optimizations can have a large impact. The OnePlus 3 is no exception, with it achieving higher scores than the LG G5 in every test except for video playback where they have roughly the same scores.

This is not unexpected, as it was demonstrated in the LG G5 review that the G5 has more conservative frequency scaling than the other Snapdragon 820 devices that we've seen, which is reflected in PCMark's tests. In any case, the OnePlus 3 actually gets close to the Huawei Mate 8 in the writing test, and beats it and the LG G5 by a large margin in the photo editing test. In the end the OnePlus 3 places second on our overall chart, with only the Huawei Mate 8 ahead of it, and the gap between it and the Mate 8 being smaller than the gap between it and the Zenfone 2 which is the next fastest smartphone. 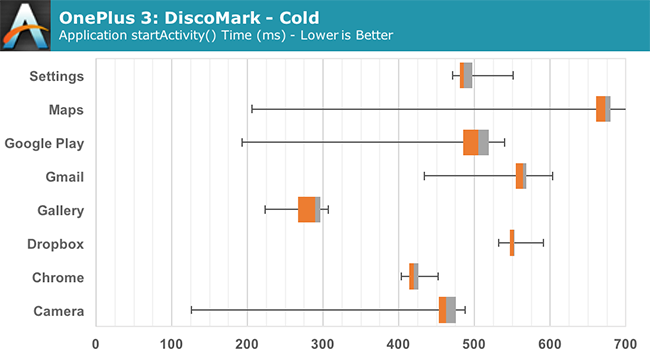 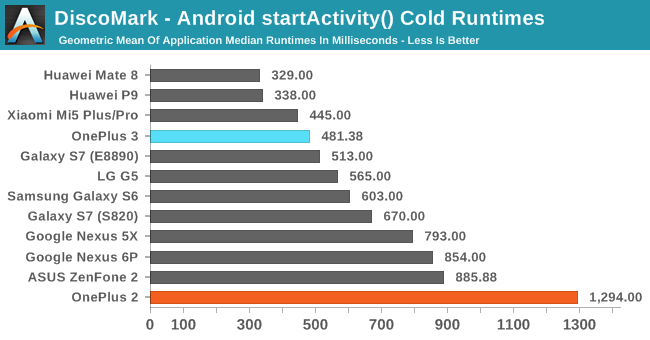 The OnePlus 3 is over two times faster than the OnePlus 2 with cold app launches where the application isn't resident in memory in any state. This is likely a combination of improved NAND performance, and changes to OnePlus's DVFS settings in addition to the performance improvements that Snapdragon 820 provides on its own. The impact that this has on the performance of the interface is significant, and when I reviewed the OnePlus 2 I noted how painfully slow it was to move around and through the applications. This new testing is a great example of that, with the OnePlus 2 taking 1.3 seconds just to launch apps, while the OnePlus 3 takes under 500ms and is the second fastest device here. 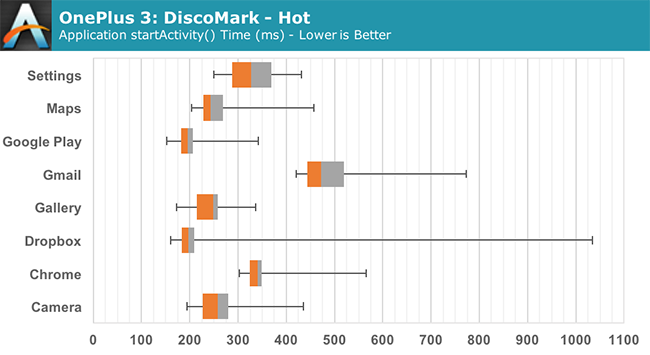 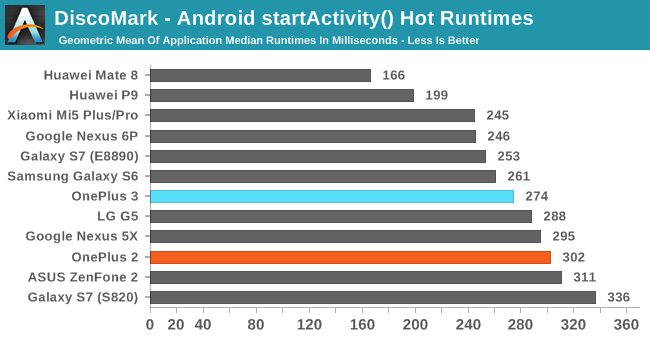 The OnePlus 3 improves a bit over the OnePlus 2 when resuming apps that are resident in memory, but not by a great deal. In general, all our devices hover between 250 and 300ms here, with the exception of the Huawei Mate 8 and P9 which are really in a category of their own for performance. While there's no enormous improvement here, the OnePlus 3 is competitive with other high end devices in the market, so there's nothing to complain about either.

One thing worth noting is that our set of apps wouldn't come close to utilizing the OnePlus 3's 6GB of RAM. Unfortunately, no matter how many apps we added, this would actually still be the case. The reason is that OnePlus has implemented very aggressive app eviction from memory, which means that your 6GB of RAM is really just sitting there using energy, and in general the utilization is pretty low. This may be a holdover from when the OnePlus 2 shipped in a 3GB configuration, but it's something OnePlus needs to address in a future OTA update. I'd imagine the Android enthusiast community is already at work on, or has already created custom kernels to alter this behavior as well. With 6GB of RAM you should be able to comfortably keep all of a user's frequently used apps resident in memory.

It's great to see that OnePlus is producing a smartphone with competitive performance once again. When the OnePlus One launched, Snapdragon 801 was the best you could get in an Android smartphone. The OnePlus 2 was an unfortunate victim of Snapdragon 810's heat and throttling problems, but OnePlus certainly didn't help the issue by hardcoding in mechanisms to detect Google Chrome and shut the A57 cluster off entirely. With the OnePlus 3 you get some of the best CPU performance in an Android phone, with PCMark's real-world tests demonstrating noticeable gains over the LG G5 which also uses Snapdragon 820. If I had to sum things up in a single line I'd just say that it's good to see that OnePlus is back in the game.