ASRock certainly allocated a lot of resources on the aesthetic design of the Z270 Supercarrier, most likely in an effort to make the motherboard more appealing towards gamers, as aesthetics hardly matter for the largest percentage of professionals. The PCB is half black, half grey, with white stripes vaguely forming the shape of an aircraft carrier’s flight deck. A large “27” is embossed onto the chipset’s heatsink, most likely as a reference to the Z270 chipset. There are three heatsinks surrounding the CPU socket, two on the VRM circuitry and one for the Broadcom PEX 8747 chipset that provides the extra 48 PCIe lanes that this motherboard needs. Two heatsinks are silver and the top heatsink is black. There is also a plastic silver frame covering the rear I/O ports, the sound circuitry, most of the motherboard’s controllers and part of the vertical VRM heatsink. Although this frame can be easily mistaken for metal, it is plastic and serves no other purpose than that of an aesthetic enhancement. 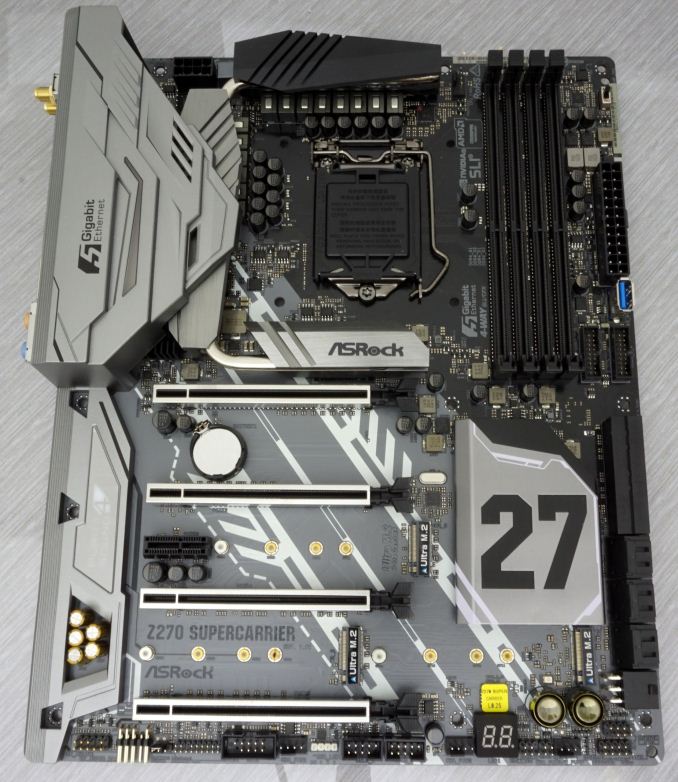 There are five PCIe slots on the Z270 Supercarrier. Four of them are full-length PCIe slots which, thanks to the presence of the Broadcom PEX 8747 chip, can support up to four PCIe ×8 devices. If two or three graphics cards are installed, the Z270 Supercarrier supports ×16/×16 and ×16/×8/×8 configurations respectively. These four full-length PCIe slots feature a metallic brace that doubles as an extra mechanical support for heavy graphics cards and as an aesthetic improvement. The fifth PCIe slot is a typical PCIe ×1 slot, powered from the chipset. The placement of the PCIe x1 right beneath the second full-length PCIe ×16 slot allows the installation of a card with single and dual GPU configurations. However, it cannot be used with triple and quad SLI configurations, except in the off chance that the graphics card installed in the second PCIe slot needs only one expansion slot or liquid cooling is used with single slot water blocks.

The motherboard’s designers did what they could to make the Z270 Supercarrier as functional as possible, placing almost all of the ports and connectors across the edges of the motherboard. The only exception are the M.2 device slots. There are three PCIe ×4 M.2 slots on the Z270 Supercarrier, one between the second and third graphics card slots and two across the space between the third and fourth graphics card slots. All three M.2 slots support devices up to 80 mm long (2280) and all three can concurrently operate in PCIe ×4 mode. If SATA M.2 devices are installed, however, the M.2 slots share lanes with the normal SATA ports and up to four SATA ports may be disabled (one if a SATA device is installed on the M.2_1 or M.2_3 slots, two if a SATA device is installed on the M.2_2 slot). The Z270 has two SATA Express connectors and two standard SATA 6 Gb/s connectors that are provided by the Intel Z270 chipset, plus an extra four SATA 6 Gb/s connectors provided by an additional ASMedia ASM1061 controller. The two SATA Express connectors may also be used as four standard SATA 6 Gb/s connectors. Beneath the SATA connectors, there is an additional PCIe 6-pin 12V connector that has to be used for multi-GPU configurations, so triple and quad SLI system builders need to take into consideration that an additional PCIe 6-pin cable will be required from the PSU. 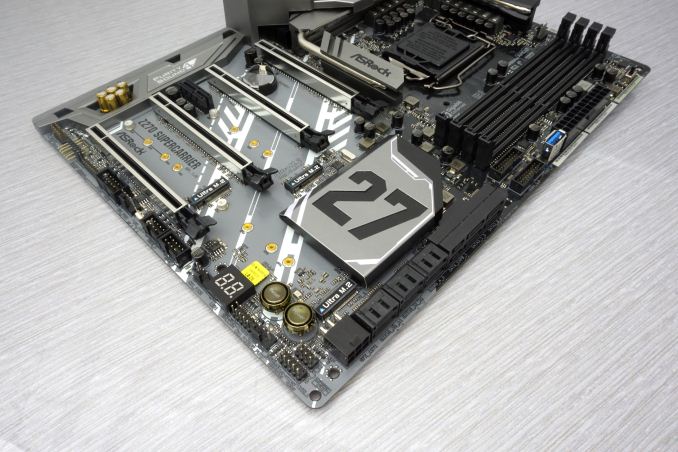 There also is a great number of headers across the right and bottom edge of the Z270 Supercarrier. Right below the 24-pin ATX power connector, we can see a full-size Type-A USB 3.0 port and two USB 3.0 headers for up to four extra USB 3.0 ports. The two USB 3.0 headers are provided via an additional ASMedia ASM1074 controller, not from the chipset. There are also two USB 2.0 headers at the bottom edge of the motherboard, right in the middle. A COM port header can be seen towards the left, which may be a rare sight nowadays but remains necessary for many professionals. At the bottom left corner of the motherboard, we spotted two front panel audio headers, one vertical and one right-angled. There are three fan headers across the bottom edge of the motherboard for case fans. For the CPU, there is a fan header to the right of the top heatsink for a fan and one at the top left corner of the motherboard for either a fan or a liquid cooling pump.

ASRock also placed a debug LCD on the Z270 Supercarrier that can save users a lot of time if something goes wrong. It is a simple two-digit LCD and the error codes are being listed in the manual. Next to the debug LCD, we find two golden switches, one for power and one for reset. Another small switch can be found at the top right corner of the motherboard and can be used for the enabling of DRAM XMP profiles without having to enter the BIOS. We can also notice that there are two BIOS chips, one for the main BIOS and one serving as a backup, just in case something goes wrong during a BIOS flash or for users that need to quickly swap between BIOS versions or settings.

The rear panel of the ASRock Z270 Supercarrier is home to a lot of surprises as well. At the top, we start with a combo PS/2 port and two USB 2.0 ports, with the company obviously trying to maximize the motherboard’s compatibility with legacy devices. Right next to the USB 2.0 ports we can discern a tiny button that can be used to clear the CMOS if overclocking or other BIOS settings go awry. Moving downwards, we find the Intel AC3160 WiFi/Bluetooth antenna connectors, followed by a DisplayPort 1.2 and a HDMI 1.4a monitor connectors. ASRock did not bother installing an HDMI 2.0 port on the Z270 Supercarrier as they do not expect that anybody will be using it without at least one powerful graphics card installed. 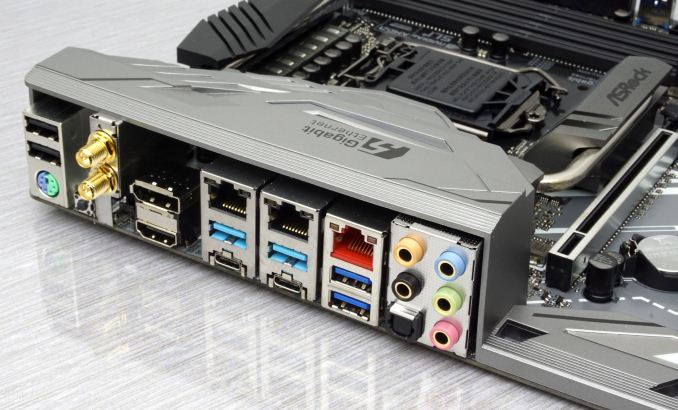 The following two blocks have one Intel Gigabit LAN port, one USB 3.0 port and one USB 3.1 Type-C port each. The Type-C ports are provided via an Intel JHL6540 controller. The third block has a red LAN port, marking the AQUANTIA 5 Gbps controller, plus two USB 3.0 ports. Finally, the last block is home to five 3.5 mm gold-plated audio jacks and an optical SPDIF connector. 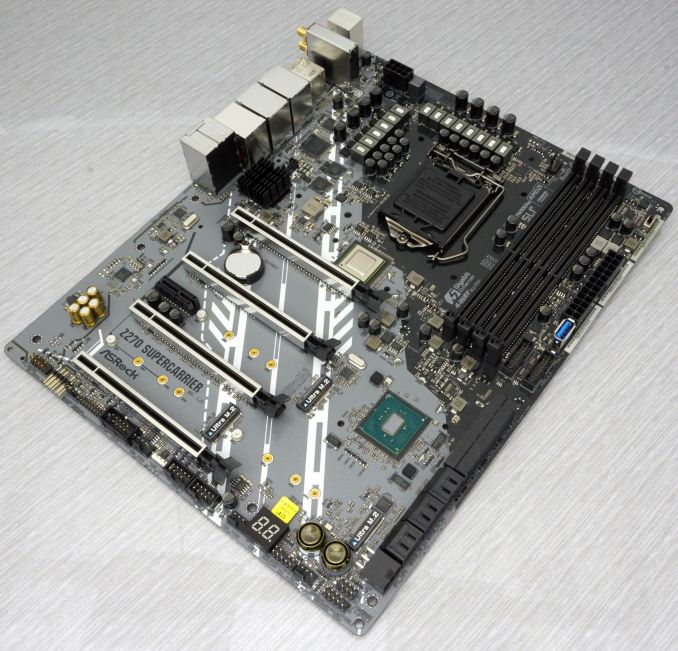 The Z270 has a 14-phase CPU power circuitry, making it by far the best power circuitry that we have seen on a Z270 motherboard up to this date. The controller is an International Rectifier IR35201, the same as that we found on the ASRock Fatal1ty Z270 Gaming-ITX/ac. This controller can handle up to eight phases, so ASRock had to install an additional six dual MOSFET drivers to double the number of phases. Therefore, the IR35201 is set to a 4+2 configuration that is being doubled to 8+4 phases. The additional two phases are the VCCIO and VCCSA and are controlled by a uPI controller. Nichicon supplies all of the solid-state capacitors on this motherboard, including the special “audio” golden capacitors of the audio circuitry. 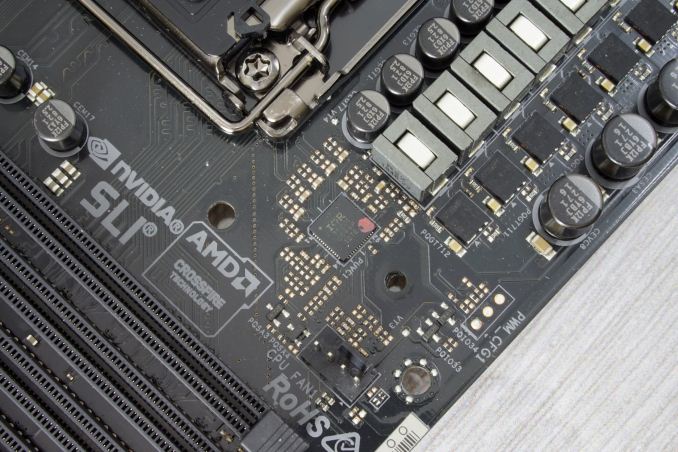 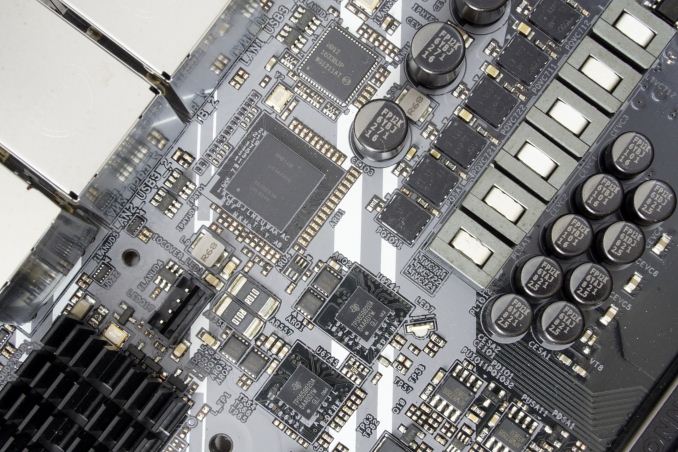 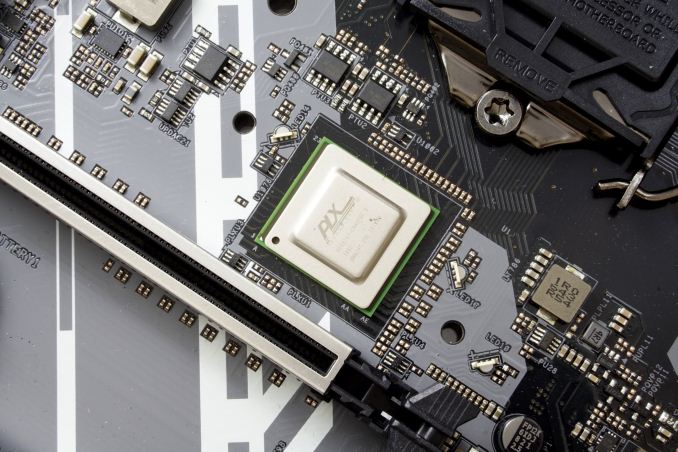