Mea-Culpa: It Should Have Been Caught Earlier

As stated on the previous page, I had initially had seen the effects of this behaviour back in January when I was reviewing the Kirin 970 in the Mate 10. The numbers I originally obtained showed worse-than-expected performance of the Mate 10, which was being beaten by the Mate 9. When we discussed the issue with Huawei, they attributed it to a firmware bug, and pushed me a newer build which resolved the performance issues. At the time, Huawei never discussed what that 'bug' was, and I didn't push the issue as performance bugs do happen.

For the Kirin 970 SoC review, I went through my testing and published the article. Later on, in the P20 reviews, I observed the same lower performance again. As Huawei had told me before it was a firmware issue, I had also attributed the bad performance to a similar issue, and expected Huawei to 'fix' the P20 in due course.

Looking back in hindsight, it is pretty obvious there’s been some less than honest communications with Huawei. The newly detected performance issues were not actually issues – they were actually the real representation of the SoC's performance. As the results were somewhat lower, and Huawei was saying that they were highly competetive, I never would have expected these numbers as genuine.

It's worth noting here that I naturally test with our custom benchmark versions, as they enable us to get other data from the tests than just a simple FPS value. It never crossed my mind to test the public versions of the benchmarks to check for any discrepancy in behaviour. Suffice to say, this will change in our testing in the future, with numbers verified on both versions.

With all that being said, our past published results for Kirin 970 devices were mostly correct - we had used a variant of the benchmark that wasn’t detected by Huawei’s firmware. There is one exception however, as we weren't using a custom version of 3DMark at the time. I’ve now re-tested 3DMark, and updated the corresponding figures in past reviews to reflect the correct peak and sustained performance figures.

As far as I could tell in my testing, the cheating behaviour has only been introduced in this year’s devices. Phones such as the Mate 9 and P10 were not affected. If I’m to be more precise, it seems that only EMUI 8.0 and newer devices are affected. Based on our discussions with Huawei, we were told that this was purely a software implementation, which also corroborates our findings.

Here is the competitive landscape across our whole mobile GPU performance suite, with updated figures where applicable. We are also including new figures for the Honor Play, and the new introduction of the GFXBench 5.0 Aztec tests across all of our recent devices: 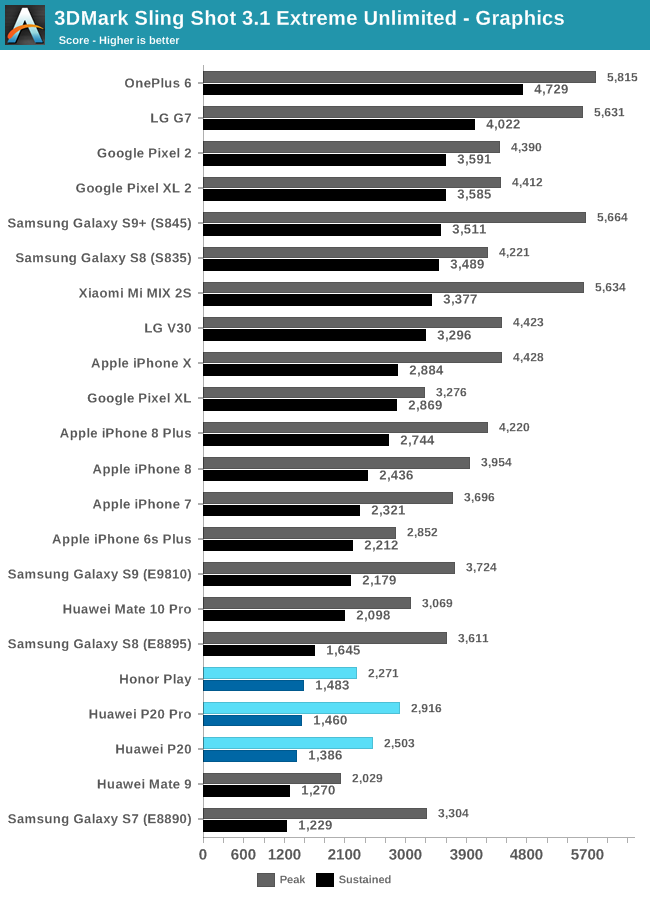 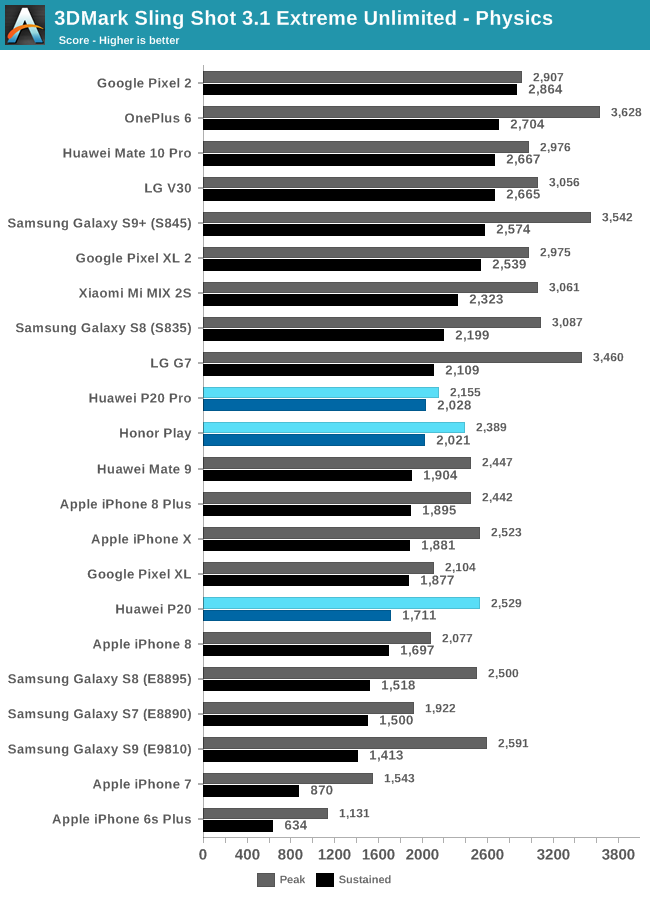 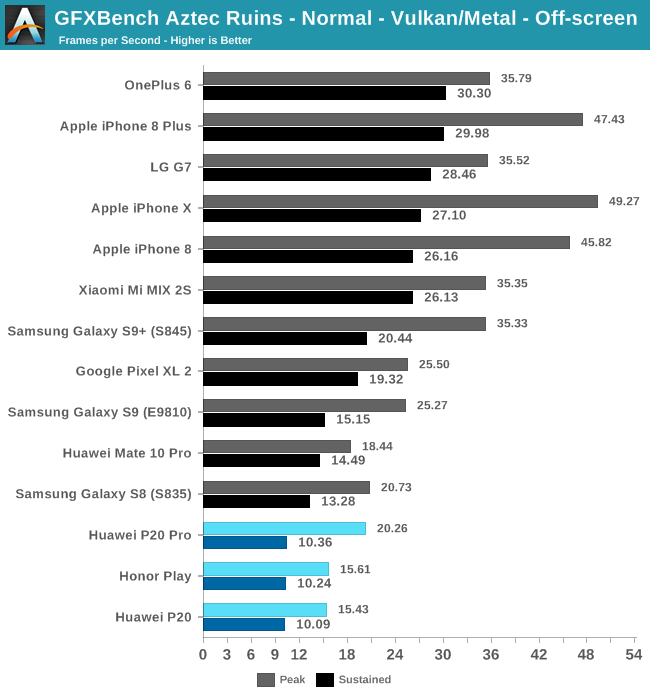 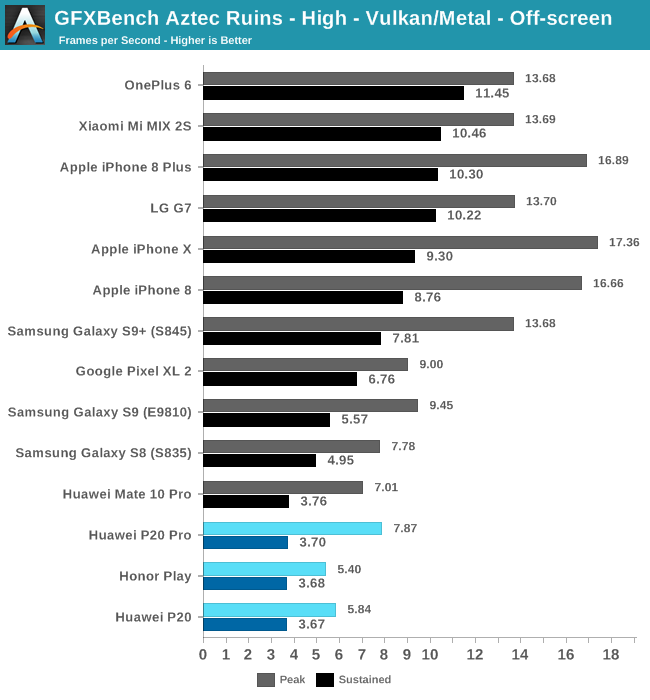 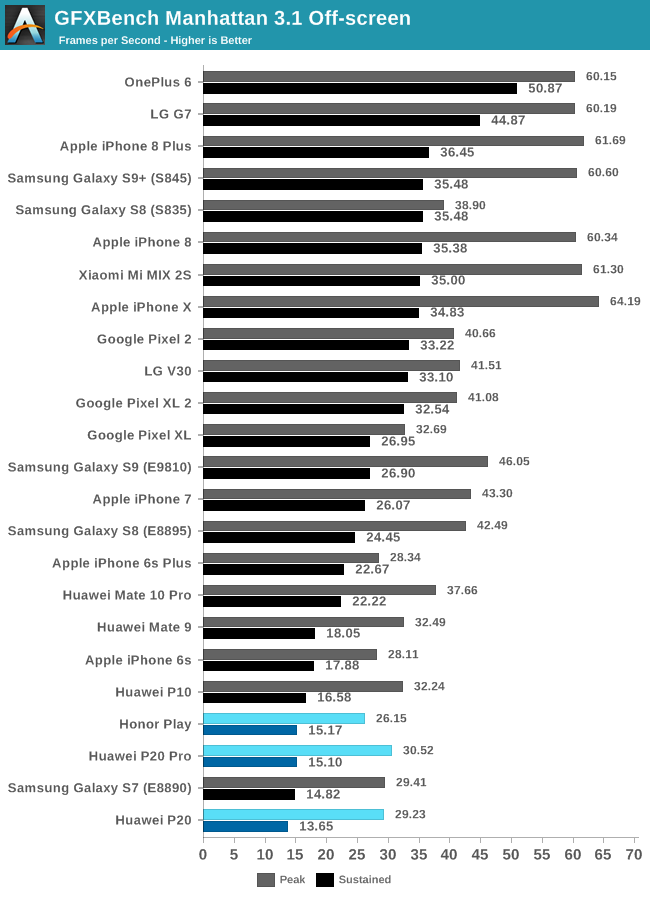 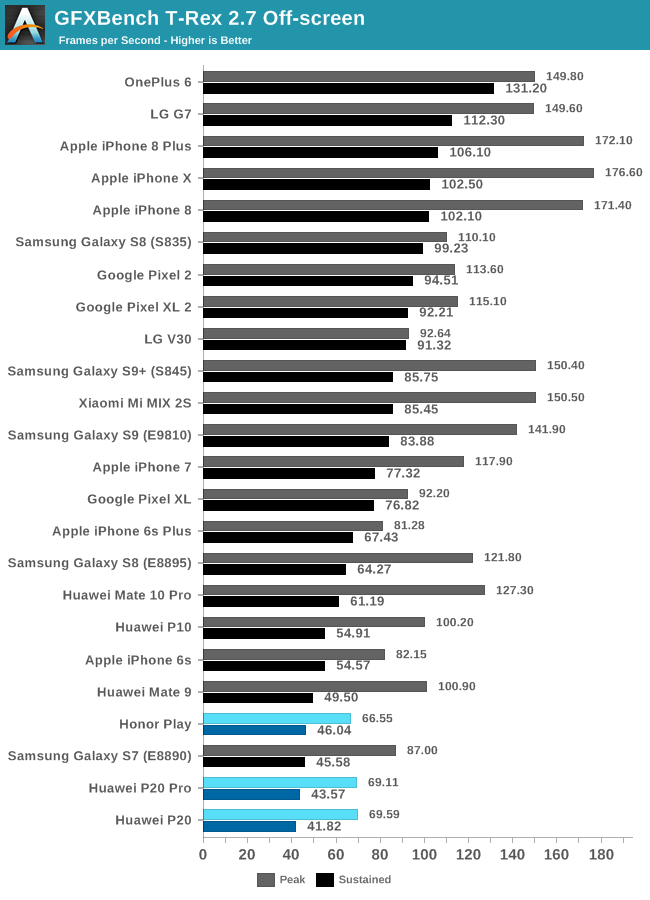 Overall, the graphs are very much self-explanatory. The Kirin 960 and Kirin 970 are lacking in both performance and efficiency compared almost every device in our small test here. This is something Huawei is hoping to address with the Kirin 980, and features such as GPU Turbo.