The Surface Go is powered by the Intel Pentium Gold 4415Y processor, which unlike the Pentium Silver lineup, is in fact a Core architecture-based CPU. In this case, it’s Kaby Lake-Y based, and offers two cores, four threads, and a 1.6 GHz frequency. The Y series offers a 6-Watt TDP for fanless operation, but unlike the Core branded processors, the Pentium Gold does not offer any sort of boost at all, so the processor runs at a 1.6 GHz maximum clockspeed. Also, being Core based, there’s no support for LPDDR4 yet, so the Surface Go is offered with LPDDR3, in either 4 or 8 GB configurations in dual-channel mode. The LTE model is only available with 8 GB, and that’s what we are reviewing here. 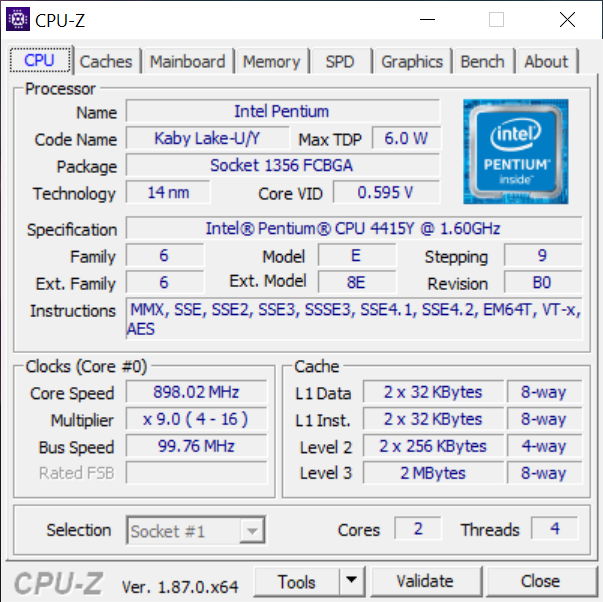 When the Surface Go was first announced, it was nice to see Microsoft step up to Core on their smaller tablet, when the previous Surface 3 was powered by Intel’s Atom lineup, but the Pentium Gold 4415Y, thanks to the lack of any sort of Turbo, is going to be hampered quite a bit compared to even a Core m3 offering. Intel really likes to segment its product lineups, and they price anything named Core high enough that it’s difficult to find one in a low-cost product. The solution to that is competition in this space, and unfortunately, there’s still little competition in the notebook space for low-power processors. That may change in the future with both Qualcomm and AMD making strides here, but today, if you want reasonable performance and good battery life, Intel is still the name of the game.

The Surface Go was run through our standard testing suite. A selection of reviewed devices were chosen to give an idea where the performance stands with this model. Of note, the Surface 3 from 2015 was included to provide a glimpse of the gains that have been made switching away from Atom, and although we’ve not reviewed it yet, the Chuwi LapBook SE is included as well to see how the Pentium 4415Y compares against the latest Gemini Lake Atom featuring LPDDR4. The Surface Pro 4 was included since it was a dual-core i5 model, to give a comparison against a dual-core Core based processor, since today they are all quad-core. 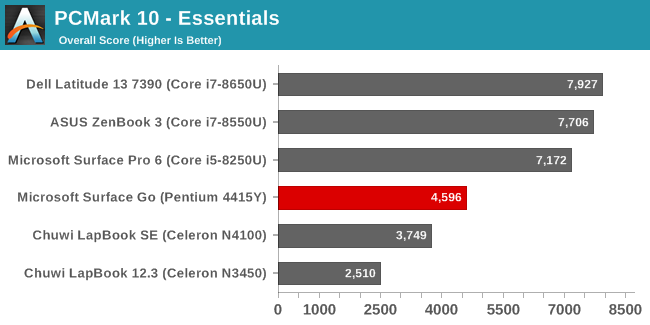 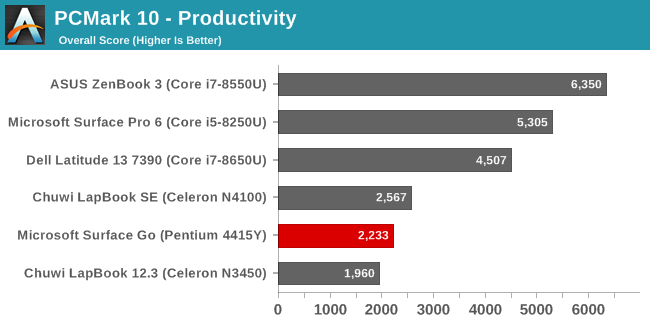 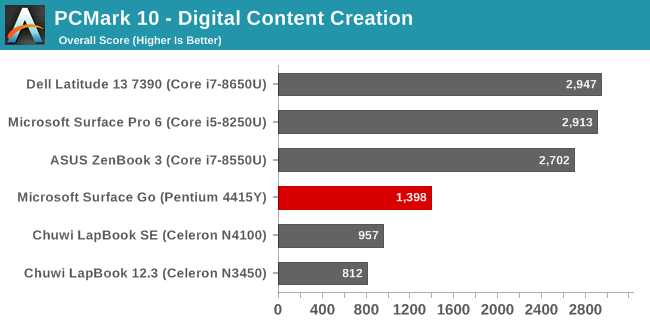 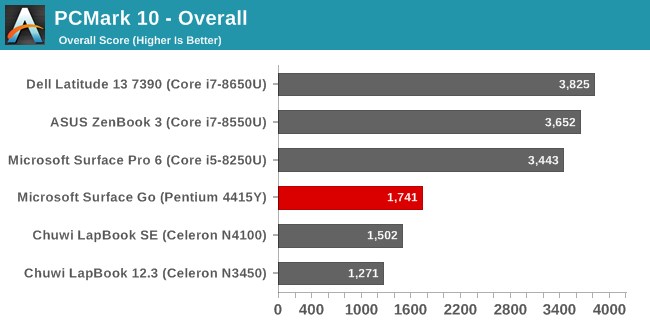 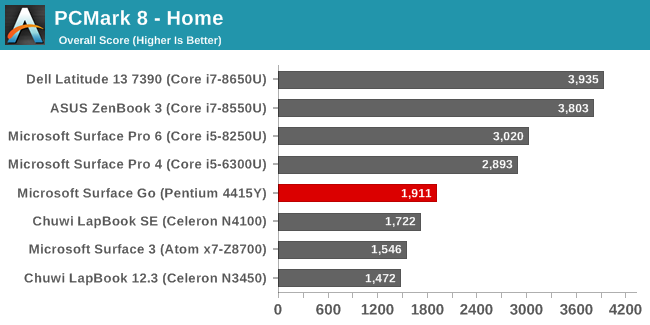 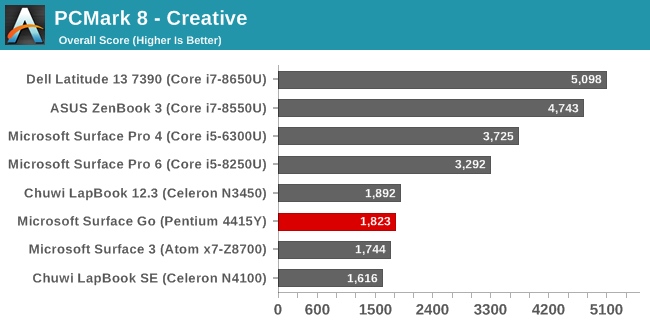 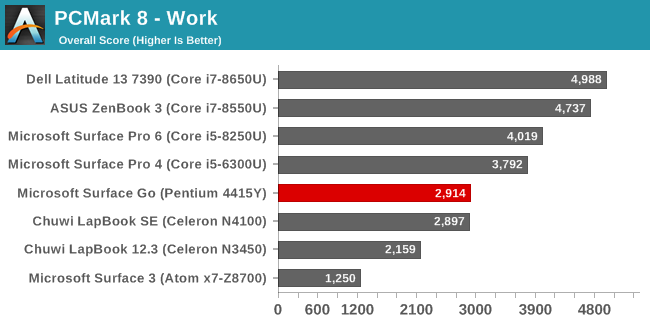 UL Benchmark’s PCMark is a complete system benchmark, with several workloads which stress various components in a PC, from the CPU, GPU, storage, and more. The latest PCMark 10 will be our standard going forward, but PCMark 8 has been included as well since we have a more comprehensive backlog of data for it including the Surface 3.

This isn’t a great start for the Surface Go. With a 1.6 GHz frequency, and no turbo capabilities, the dual-core Pentium 4415Y is well off of the latest Core U series we see in most laptops. Compared to Atom, the story is a bit more nuanced. The Core CPU, even at just 1.6 GHz, squeaks past the Gemini Lake based LapBook SE, and the GPU on the Pentium is quite a bit more powerful, as seen in the Digital Content Creation sub-score. It is also well ahead of the Surface 3’s Atom from 2015. This really comes down to Intel wanting to segment their products very clearly, and by eliminating any Turbo, the Pentium loses out on all of the work Intel has done to ramp up their frequencies quickly for burst workloads, which is a shame. If it even offered a slight Turbo, the results would be quite a bit stronger. 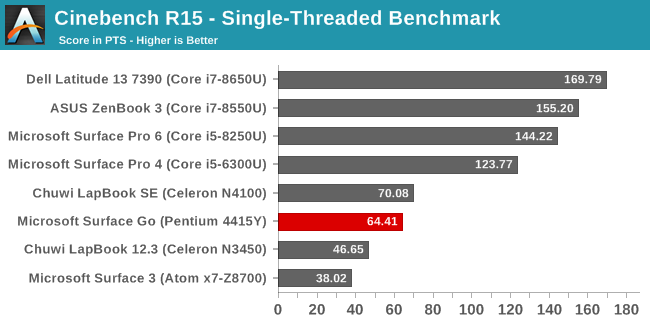 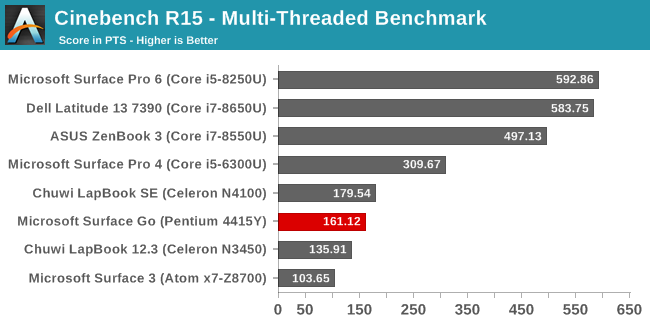 Cinebench is a purely CPU based task, and it offers a single-threaded mode which lets us look at the underlying CPU architecture’s performance, as well as a multi-threaded workload that performs much better on the multi-core devices being offered today.

The gap to Core is once again huge, with even the dual-core i5 Skylake from the Surface Pro 4 well ahead. Cinebench loves higher frequencies, and the 1.6 GHz of the Pentium 4415Y is seriously outclassed here. The Surface Pro 4 with a dual-core Skylake Core i5 scores about twice as high.

Comparing the Surface Go to the Surface 3 though shows a nice performance gain compared to the previous small Surface with the move to a Core based processor. But, compared to the latest Gemini Lake in the LapBook SE, the Atom based N4100 actually outperforms the Core based Pentium 4415Y in both the single threaded, and multi-threaded results. 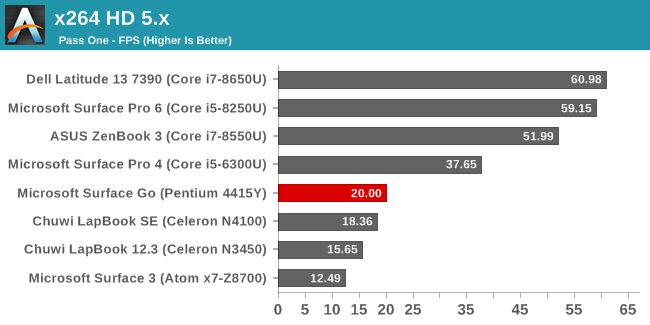 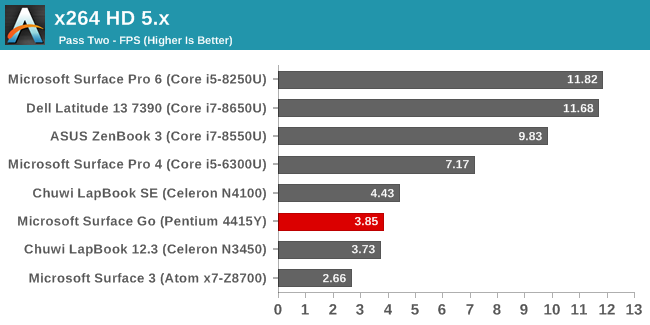 Much like Cinebench, x264 is a purely CPU based test, but without the ability to choose a single-threaded workload. As such, more cores and lots of frequency tend to result in higher frames per second in this video conversion test. And, much like Cinebench, we can see the Pentium 4415Y is quite held back at just a 1.6 GHz frequency compared to any of the U series notebooks. Compared to Gemini Lake, the Pentium is slightly ahead in the first pass, but slightly behind in the second pass. So, despite Microsoft choosing a Core based processor for this iteration of their smallest Surface, it really only just competes with Atom on the CPU side.

Web performance is important, but also tends to be the least reliable method of testing system performance since the underlying browser carries such a dramatic impact on the performance of web scripting. To keep results as even as we can, Microsoft Edge is used as the browser for all of our testing, but it of course gets updated over time too so even sticking with a single browser isn’t ideal. 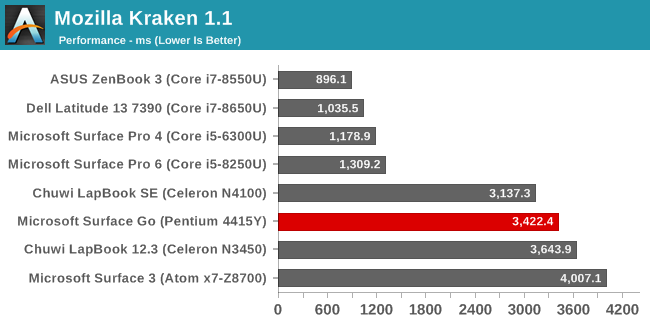 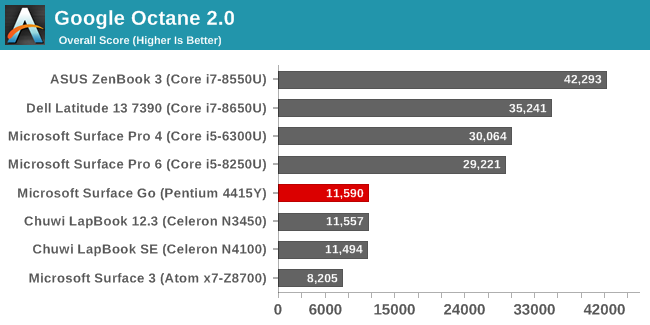 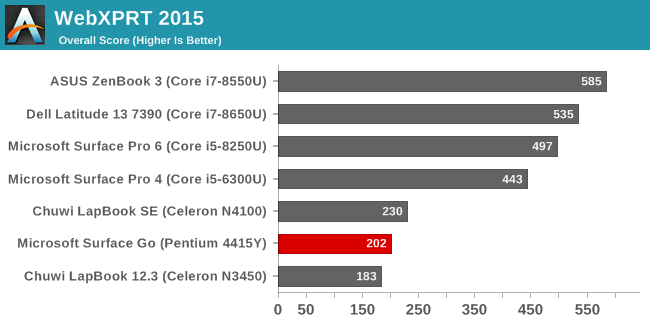 Speaking of not being ideal, locking a Core CPU to a single frequency roughly halves the performance on standard testing, but web testing is likely the biggest beneficiary of Intel’s aggressive Turbo modes, and here we see results well under half the performance of a dual-core Skylake based Surface Pro 4. It does have a small improvement compared to the Surface 3, but compared to the Gemini Lake N4100, it’s also more or less just even.

We’ve seen Intel produce some impressive products based on their Core architecture, and even when they offer Core branded products with the same lowered TDPs of this Y series Pentium, they still include aggressive Turbo modes that will boost performance for a short workload, without breaking the power budget. That’s not the case with the Pentium Y series though. It just runs at a straight 1.6 GHz whether it’s busy or not, and by intentionally holding back performance, they’ve produced a Core based CPU which can be beaten by their latest Atom processor in CPU tasks. That’s not an ideal situation for Intel, nor it is an ideal situation for their customers.

The performance of Surface Go is slightly higher than the Surface 3 which more or less filled the same spot in Microsoft’s lineup, but it’s somewhat amazing that the latest Atom processor can offer higher single-threaded performance, and since it offers up to four cores, higher multi-threaded performance as well.

The performance gap to even just dual-core Skylake or Kaby Lake U series Core i5 processors is dramatic, and of course the latest laptops and Surface Pro models feature quad-core Kaby-Lake Refresh or Whiskey Lake now, which ramps up the performance levels even further.

Unfortunately, the Surface Go offers middling performance, and with the prices that Intel demands for their Core branded processors, there’s no way Microsoft would have been able to offer the entry price they have with Core. Until we see some real competition in this part of the market, whether with AMD getting their power usage in check, or with Qualcomm dramatically improving their performance, we are likely stuck with this.