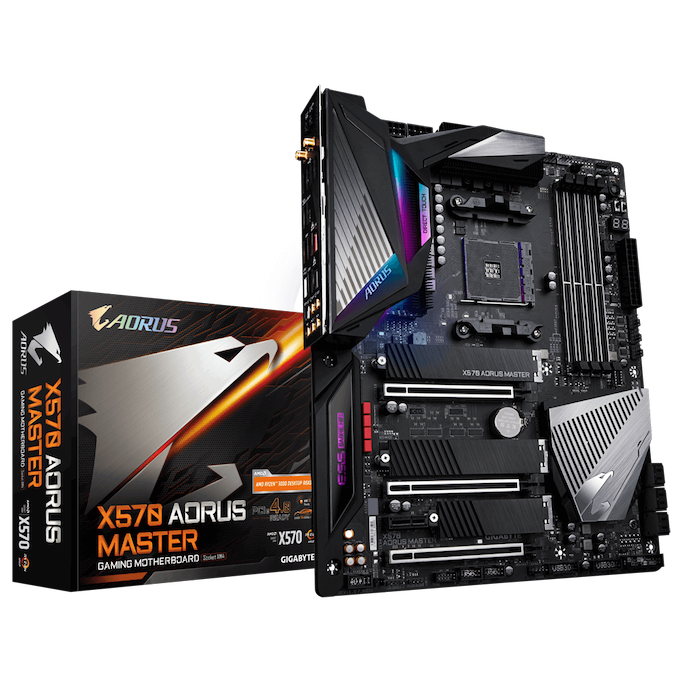 During Computex 2019, GIGABYTE unveiled a wide variety of X570 motherboards stretching from the entry-level X570 Gaming X to the very high-end flagship, the X570 Aorus Xtreme. The GIGABYTE X570 Aorus Master slots in below the X570 Aorus Xtreme and has a range of high-end features such as 2.5 Gigabit LAN, three PCIe 4.0 M.2 slots, and Intel's Wi-Fi 6 802.11ax wireless interface.

The GIGABYTE X570 Aorus Master could be considered its flagship for general consumers with a price tag of $349 which situates it towards the top of the X570 range at launch. Included is support for up to 128 GB of DDR4 memory across its four slots, with three PCIe 4.0 x4 M.2 slots each with its own individual M.2 heatsink, and six SATA ports. The boards networking capabilities include a Realtek RTL8125AG 2.5 G port with an assisting Intel Gigabit port, as well as an Intel AX200 802.11ax Wi-Fi 6 wireless interface which also includes support for BT 5 devices. There are three full-length PCIe 4.0 slots which operate at x16, x8/x8, and x8/x8/x4, with a single PCIe 4.0 x1 slot. 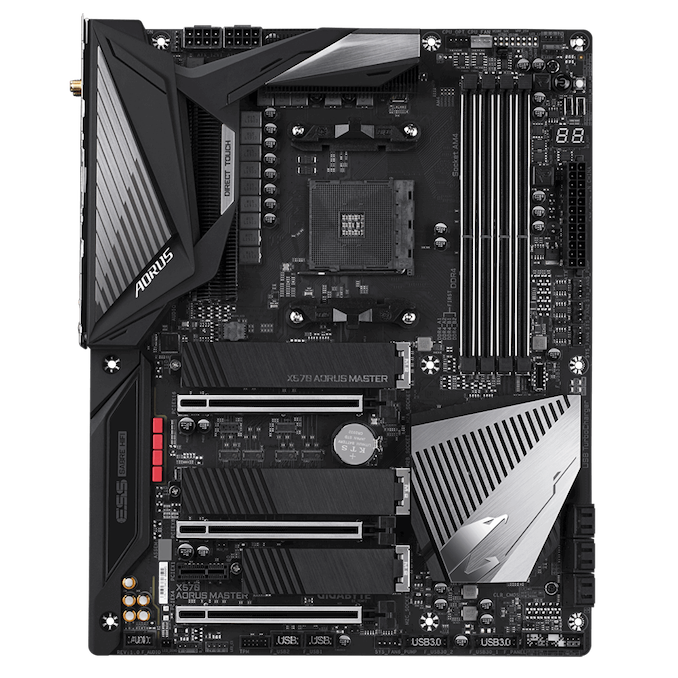 On the power delivery front, GIGABYTE is using a formidable setup with a 12+2 design with power stages rated for 50 A, and with two 8-pin 12 V ATX CPU power inputs. The onboard audio is handled by a Realtek ALC1220-VB HD audio codec and is complemented by an ESS Sabre 9118 DAC chip to enhance the auditory quality. On the rear panel is a Q-Flash Plus button for updating the firmware, a clear CMOS button, three USB 3.1 G1 Type-A, one USB 3.1 G2 Type-C, two USB 3.1 G1 Type-A and four USB 2.0 ports.

GIGABYTE's X570 Aorus Master targets gamers and enthusiasts looking to push their processors further than the rated specifications, and will likely have good memory support for fast memory to make the most of the AMD Ryzen 3000 series Infinity Fabric Interconnect. The pricing reflects this with a price tag of $349 which puts it in the upper echelon, and the second most expensive X570 model from GIGABYTE set to launch on 7/7.