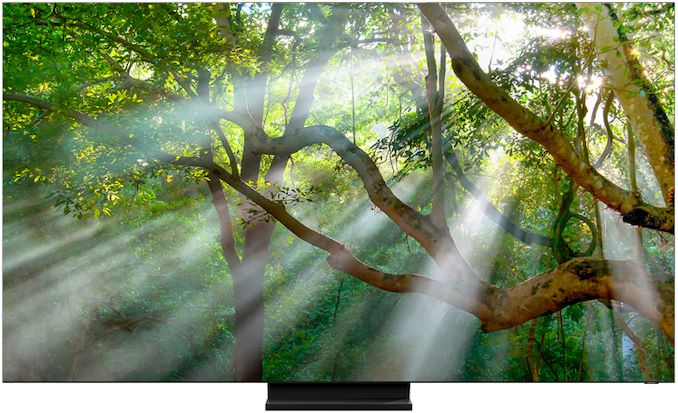 Most years CES feels first and foremost like a TV show, and certainly this year's show hasn't disappointed. Among the many vendors making TV announcements for CES 2020 was Samsung, who introduced its upcoming lineup of premium 8K QLED televisions, the Q950-series. Samsung's new Ultra-HD TVs offer a 7680×4320 resolution with quantum dot enhancements, while under the hood Samsung is using its new "AI Quantum 8K" SoC that brings support for the cutting-edge AV1 codec as well as some additional capabilities.

One of the key features of Samsung’s Q950-series 8K televisions is the so-called ‘Infinity Screen’ design that uses extremely narrows bezel to produce a scree-to-body ratio of 99%. Samsung also went thin on depth, with a thickness of just 15 mm, making the TV look rather small for the big panel within.

Unfortunately, though not uncommon for CES TV announcements, Samsung is not disclosing much in the way of the general characteristics of the Q950-series televisions; so if nothing else, we'd expect them to be same or better than those of its predecessors, the Q900-series. Which, as a refresher, those TVs featured a quantum dot-enhanced LED backlight that is also capable of FALD-like operation – which Samsung calls Direct Full Array Elite technology – driving a peak brightness of 4000 nits (the maximum luminance at which HDR content is mastered these days). Furthermore, the Q900-series TVs were already hitting 100% of the DCI-P3 color gamut. 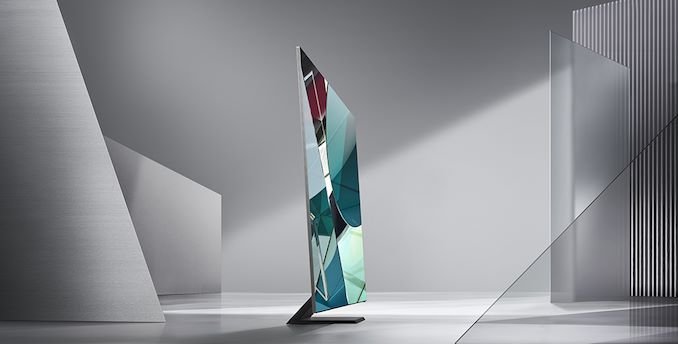 Moving on, another important element of the Samsung Q950 Ultra-HD TV family is that they incorporate the company’s latest "Quantum Processor 8K" SoC, which has higher compute and machine learning performance. Along with Samsung's latest generation upscaling technologies – all but required given the lack of 8K native content today – the SoC is also capable of AV1 decoding. This makes the Q950 among the first TVs to get AV1 decoding, and sets it up nicely to be ready for next-generation streaming options using the higher efficiency codec.

In addition to video-related enhancements, Samsung also improved the audio sub-system of the of its Q950-series TVs both in terms of hardware and in terms of software. On the hardware side of things, the TV has an integrated 5.1 audio subsystem. As for software, the televisions support such capabilities as Active Voice Amplifier that improves voice clarity based on ambient noises; Object Tracking Sound+ to enhance surround sound in response to movements on the screen, and Q-Symphony to align the work of built-in audio subsystem with Samsung’s soundbars. Last but not least, the Q950-series TVs also support various voice assistants, such as Amazon’s Alexa, Samsung’s Bixby, and Google’s Assistant.

Samsung’s Q950-series televisions will be available later this year.