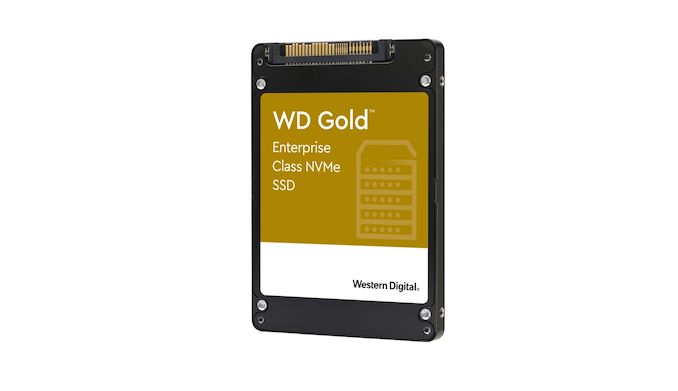 On what would have been the first day of the Open Compute Project's annual Global Summit, Western Digital is bringing out a new line of enterprise SSDs. The WD Gold brand for enterprise drives is getting an SSD counterpart to the existing WD Gold enterprise hard drives. WD's color-based drive branding now features both SSDs and hard drives in almost every product segment: Blue and Green mainstream consumer drives, Black for high-end consumer, Red for NAS systems, and Gold for enterprise. The only one missing an SSD option is the WD Purple family for video surveillance recording (though there is a WD Purple microSD card).

The new WD Gold SSD isn't anything new technologically; it's basically a re-branding of a portion of the Ultrastar DC SN640 product line. Where the WD Gold differs is in the target markets: Like other WD (color) products, the WD Gold SSD is intended for channel and retail sales rather than the large-scale direct B2B sales model used for Western Digital's Ultrastar datacenter drives and their client OEM drives. The WD Gold SSD will make Western Digital's enterprise SSD technology more accessible to small and medium enterprise customers.

The WD Gold SSD is based on the same hardware as the Ultrastar DC SN640 series, but the WD Gold product line doesn't include as many options. The SN640 comes in two endurance tiers: 0.8 drive writes per day and 2 DWPD. The WD Gold SSD line only includes the 0.8 DWPD drives, and only the U.2 form factor versions: a total of four capacity options from 960 GB up to 7.68 TB. These drives use the latest Western Digital/Kioxia 96-layer 3D TLC NAND flash memory and one of Western Digital's own in-house NVMe controller designs.

The technical specs for the WD Gold SSDs are identical to the matching Ultrastar DC SN640 models. The performance is limited largely by the PCIe 3.0 interface and the power/thermal constraints of the 2.5"/7mm U.2 form factor: these drives idle just under 5W and can draw up to 12 W under load, with configurable power states to throttle down to 10 or 11 W for high-density deployments that can't quite keep them cool at the full 12W each.

The WD Gold SSDs are planned to ship starting in early Q2. Pricing has not been announced.