Microarchitectural attacks have been all the rage. For the past two years, we’ve seen attacks like Meltdown, Spectre, Foreshadow/L1TF, Zombieload, and variants all discuss different ways to probe or leak data from a victim to a host. A new attack, published on March 10th by the same research teams that found the previous exploits, turns this principle on its head, and allows an attacker to inject their own values into the victim’s code. The data injection can either be instructions or memory addresses, allowing the attacker to obtain data from the victim. This data injection bypasses even stringent security enclave environments, such as Intel’s Software Guard Extensions (SGX), and the attackers claim that successful mitigation may result in a slowdown of 2x to 19x for any SGX code.

The attack is formally known as LVI, short for ‘Load Value Injection’, and has the MITRE reference CVE-2020-0551. The official website for the attack is https://lviattack.eu/. The attack was discovered on April 4th 2019 and reported to Intel, and disclosed publicly on March 10th 2020. A second group discovered and produced a proof-of-concept for one LVI attack variant in February 2020.

Currently Intel has plans to provide mitigations for SGX-class systems, however non-SGX environments (such as VMs or containers that aren’t programmed with SGX) will remain vulnerable. The researchers state that ‘in principle any processor that is vulnerable to Meltdown-type data leakage would also be vulnerable to LVI-style data injection’. The researchers focus was primarily on breaking Intel SGX protections, and proof of concept code is available. Additional funding for the project was provided by ‘generous gifts from Intel, as well as gifts from ARM and AMD’ – one of the researchers involved has stated on social media that some of his research students are at least part-funded by Intel.

Intel was involved in the disclosure, and has a security advisory available, listing the issue as a 5.6 MEDIUM on the severity scale. Intel also lists all the processors affected, including Atom, Core and Xeon, which goes as far back as Silvermont, Sandy Bridge, and even includes the newest processors, such as Ice Lake (10th Gen)* and the Tremont Atom core, which isn’t in the market yet.

*The LVI website says that Ice Lake isn’t vulnerable, however Intel’s guidelines says it is.

*Update: Intel has now updated its documents to say both Ice Lake and Tremont are not affected.

All told, LVI's moderate CVE score is the same as the scores assigned to Meltdown and Spectre back in 2018. This reflects the fact that LVI has a similar risk scope as those earlier exploits, which is to say data disclosure. Though in practice, LVI is perhaps even more niche. Whereas Meltdown and Spectre were moderately complex attacks that could be used against any and all "secure" programs, Intel and the researchers behind LVI are largely painting it as a theoretical attack, primarily useful against SGX in particular.

The practical security aspects are a mixed bag, then. For consumer systems, at least, SGX is rarely used outside of DRM uses (e.g. 4K Netflix), which isn't likely to upend too much. None the less, the researchers behind LVI have told ZDNet that the attack could theoretically be delivered via JavaScript, so it could potentially be delivered in a drive-by fashion, as opposed to requiring some kind of local code execution. The upshot, at least, is that LVI is already thought to be very hard to pull off, and JavaScript certainly wouldn't make that any easier.

As for enterprise and business users, the potential risk is greater due to both the more widespread use of SGX there, and the use of shared systems (virtualization). Ultimately such concerns are going to be on a per-application/per-environment basis, but in the case of shared systems in particular, the biggest risk is leaking information from another VM, or from a higher privileged user. Enterprises, in turn, are perhaps the best equipped to deal with the threat of LVI, but it comes after Meltdown and Spectre already upended things and hurt system performance.

The other recent microarchitectural exploits, such as Spectre, Meltdown, L1TF, Zombieload and such, are all related to data leaks. They rely on data to be leaked or extracted from various buffers that are ‘all-access’ from the microarchitectural standpoint. LVI is different, in that it’s more of a direct ‘attack’ on the system in order to extract that data. While it means the attacker has to clean up after themselves, as a result of what the attack can do, it means it can be more dangerous than other previous exploits. The difference in the exploit means that current mitigations don’t work here, and this exploit according to the research essentially states that Intel’s secure enclave architecture requires significant changes in order to be useful again. 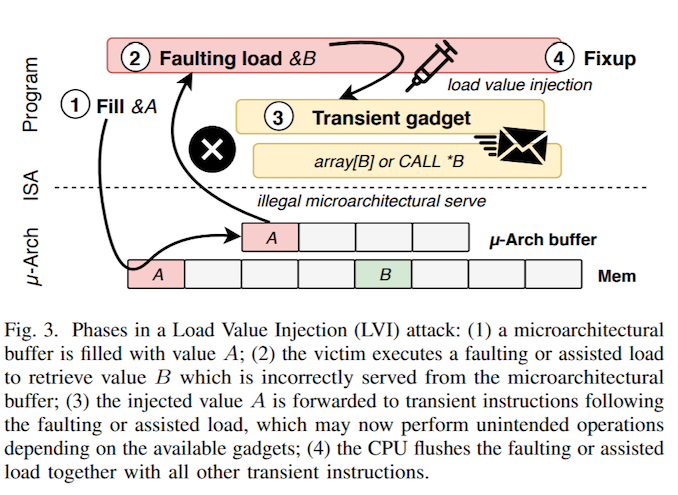 The focus of the attack has been on Intel’s secure enclave strategy, known as SGX, due to the nature of the technology. As reported by The Register, it is in fact the nature of SGX that actually assists the attack – SGX creates page faults for memory loads by altering non-secure buffer page tables (point 2 above).

Intel’s own deep dive into the problem explains that:

‘If an adversary can cause a specified victim load to fault, assist, or abort, the adversary may be able to select the data to have forwarded to dependent operations by the faulting/assisting/aborting load.

For certain code sequences, those dependent operations may create a covert channel with data of interest to the adversary. The adversary may then be able to infer the data's value through analyzing the covert channel.’

Intel goes on to say that in a fully trusted environment, this shouldn’t be an issue:

‘Due to the numerous, complex requirements that must be satisfied to implement the LVI method successfully, LVI is not a practical exploit in real-world environments where the OS and VMM are trusted.’

But then states that the fact that its own SGX solution is the vector for the attack, these requirements aren’t as strict.

Then to state the obvious, Intel has a line for the ‘if you’re not doing anything wrong, it’s not a problem’ defense.

‘Where the OS and VMM are not malicious, LVI attacks are significantly more difficult to perform, even against Intel SGX enclaves.’

As a poignant ending, Intel’s official line is that this issue is not much of a concern for non-SGX environments where the OS and VMM are trusted. The researchers agree – while LVI is particularly severe for SGX, they believe it is more difficult to mount the attack in a non-SGX setting. That means that processors from other companies are less vulnerable to this style of attack however, those that are susceptible to Meltdown might be able to be compromised.

The Fix, and the Cost

Both Intel and the researchers have provided the same potential solution to the LVI class of attacks. The fix isn’t being planned at the microcode level, but at the code level, with compilers and SDK updates. The way to get around this issue is to essentially make instructions serialized through the processor, ensuring a very specific order of control.

Now remember that a lot of modern day processor performance relies on several things, such as the ability to rearrange micro-ops inside a core (out-of-order), and run multiple micro-ops in a single cycle (instructions per cycle). What these fixes do is essentially eliminate both of these when potentially attackable instructions are in flight.

For those that aren’t programmers, there exists a term in programming called a ‘fence’. A broad definition of a fence is to essentially make sure a program (typically a program running across several cores) stop at a particular point, and check to make sure everything is ok.

So, for example, imagine you have one core doing an addition, and another core doing a division at the same time. Now addition is a lot quicker than division, and therefore if there are a lot of parallel calculations to do, you might be able to fire off 4-10 additions in the time it takes to do a single division. However, if there is the potential for the additions or divisions to interact on the same place in memory, you might need a fence after a single addition+division, to make sure that there’s no conflict.

So the solution to LVI is to add these fences into the code – specifically after every memory load. This means that the system/program has to wait until every memory load is complete, essentially stalling the core for 100 nanoseconds or more. There is a knock on effect in that when a function returns a value, there are various ways for the ‘return’ to be made, and some of those are no longer viable with the new LVI attacks.

The researchers are quite clear in how this fix is expected to hurt performance – depending on the applications and various optimizations, we’re likely to see slowdowns from 2x to 19x. The researchers examined compiler variants on an i7-6700K for OpenSSL and an i9-9900K for SPEC2017. 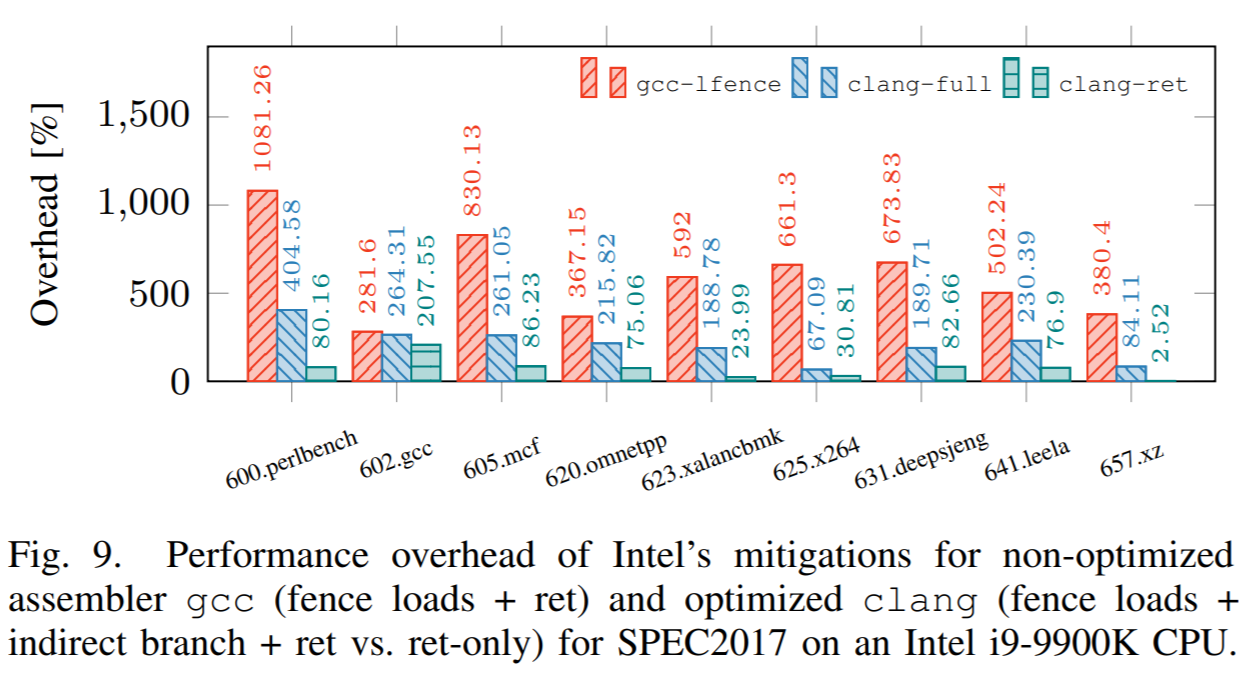 Intel has not commented on potential performance reductions.

For those that could be affected, Intel gives the following advice for SGX system users:

And for SGX Application Providers:

From the researchers, they told The Register that:

"We believe that none of the ingredients for LVI are exclusive to Intel processors. However, LVI turns out to be most practically exploitable on Intel processors … certain design decisions that are specific to the Intel SGX architecture (i.e. untrusted page tables). We consider non-SGX LVI attacks [such as those on AMD, Arm and others] of mainly academic interest and we agree with Intel's current assessment to not deploy extra mitigations for non-SGX environments, but we encourage future research to further investigate LVI in non-SGX environments,"

In the same light, all major chip architecture companies seem to have been told of the findings in advance, as well as Microsoft should parts of the Windows kernel need adjustment.

Technically, there are several variants of LVI, depending on the types of data and attack:

Overall, Intel has had a rough ride with its SGX platform. It had a complicated launch with Skylake, not being enabled on the first batches of processors then being enabled in later batches, and then SGX has been the focus of a number of these recent attacks on processors. The need for a modern core, especially one involved in everything from IoT all the way up to the cloud and Enterprise, to have an equivalent of a safe enclave architecture is paramount, and up until this point it has been added to certain processors, rather than necessarily being built from the ground up with it in mind – we can see that with Ice Lake and Tremont still affected. The attack surface of Intel’s SGX solution, compared to those from AMD or Apple, has grown in recent months due to these new attacks based on a microarchitectural level, and the only way around them is to invoke performance limiting restrictions on code development. Some paradigm has to change.