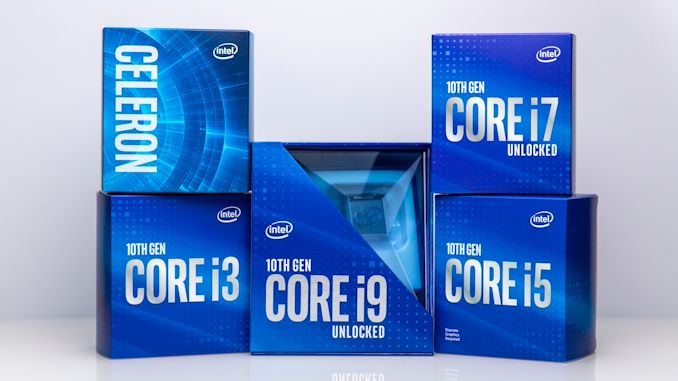 Spending five generations on the same base microarchitecture is a long time. Progress and excitement can be sustained through optimizing a process node, adding cores, and extracting every drop of frequency, but at some point the base design becomes the bottleneck and it is time to move on. Intel’s enthusiast desktop market has been waiting for an update for a couple of generations, and while the new 11th Gen Core Rocket Lake doesn’t migrate off of the 14nm process node, we are at least getting a new microarchitecture that stands to deliver (according to Intel) a 19% IPC improvement. Promising a Q1 launch, Intel lifted the lid a little on its next consumer flagship, the Core i9-11900K.

We already know that Rocket Lake is the processor that is plugging the gap while Intel continues to work on getting 10nm ready for high-performance desktop use. Rocket Lake is built upon Cypress Cove, the reimagining of Sunny Cove that has been ‘backported’ to Intel’s 14nm process. The goal here was to enable Sunny Cove performance and instruction support, such as AVX-512, on consumer 14nm, albeit with the larger core size and any related power and efficiency changes. Rocket Lake also uses Intel’s new Xe Graphics, also re-designed for 14nm. Intel saw fit to build Rocket Lake, which wasn’t in its original plans, due to the delays on 10nm, and now it seems ready to discuss its productization.

Replacing Comet Lake (5th iteration of Skylake), due to the increased size of the Rocket Lake core, Intel’s flagship moves down from the 10 cores of Comet to 8 cores of Rocket, but gains AVX-512 instructions, a new cache hierarchy (+50% L1-D, +100% L2), and up to 19% instructions per clock improvement. Meanwhile, briefly discussing the upcoming Core i9-11900K SKU in particular, Intel states that it will hit the same turbo frequencies as the current Core i9-10900K, which means we will see 5.3 GHz with one core, as well as 4.8 GHz all-core turbo. No word on the die size difference, and also no direct word on TDP, however in the footnotes we see that the Intel Rocket Lake Core i9-11900K is set to have a TDP/PL1 of 125 W and a PL2 turbo power limit of 250 W, with a turbo time of 56 seconds.

The new Core i9-11900K will also support DDR4-3200 as a standard (non-overclocked) memory speed, enabling Intel to reach parity with AMD, as well as 20 PCIe 4.0 lanes from the processor to supply bandwidth to a full GPU as well as a PCIe 4.0 x4 NVMe storage drive. Perhaps one of the biggest updates will be the connection to the chipset, with Intel doubling the DMI link from x4 to x8, doubling the total bandwidth available between devices connected to the chipset (like drives or networking) and the processor. Intel’s DMI link is often equated to PCIe 3.0, which means we are at a PCIe 3.0 x8 equivalent link here. The chipset also gains support for USB 3.2 Gen 2x2 which is a 20 Gbps connectivity speed.

Another feature on the GPU side, along with enhanced performance moving to Xe graphics, is AV1 decode support, as well as always-on Quick Sync Video. With Rocket Lake, Intel is enabling both the integrated graphics and the discrete graphics to supply compute simultaneously, allowing users to enable their discrete graphics for gaming and the integrated graphics for stream encoding. This will be managed through additional software, such as that found on dual graphics laptops, that enable pointing specific software to different devices.

Along with the new set of processors, motherboard vendors will be launching a variety of 500-series chipset based motherboards for Rocket Lake, and these motherboards will also support current generation Comet Lake processors. These new chipsets have an x8 DMI link to the CPU, unless a Comet Lake chip is installed, then it is only x4. Similarly, Rocket Lake will also work in 400-series chipsets, and the Z490 motherboards that are advertised with PCIe 4.0 support should have this enabled through a BIOS update. There is one small caveat – Rocket Lake will not work in H410 and B460 motherboards as these use 22nm chipsets. There appears to be some incompatibility here.

For performance, Intel is claiming a +2% to +9% gain in average frame rates in a variety of modern games (Gears of War 5, Cyberpunk 2077, Watch Dogs: Legion, Far Cry New Dawn) at 1080p in either High or Ultra settings. Intel also promotes that due to AVX-512, the new processors will enable DLBoost, accelerating machine learning. Essentially anything that Ice Lake mobile supports, Rocket Lake will as well. Intel has stated that the new Core 11th Gen desktop processors will have new overclocking features and capabilities, however no details were given.

We may hear more performance numbers during Intel's presentation today at CES. 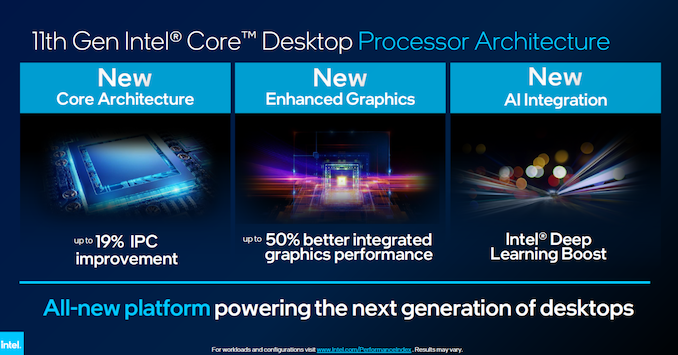 This week we are not expecting to hear much more about the Rocket Lake processors themselves, although we have a number of motherboard announcements from all the major players, with Z590, B560, and H510 motherboard information already circling around. Intel has stated that more details on Rocket Lake will come during the quarter, while the official launch of the product would appear to be in the late March time frame according to a variety of reports.