Last but not least we have Gigabyte’s top-end custom card, the 5870 Super Overclock. If the Sapphire Toxic is a card for buyers that just want a factory overclocked card, and the MSI Lightning is a card for serious overclockers, then the 5870 Super Overclock would best be described as fitting right in the middle of the two. It has the highest factory overclock of the cards we’re looking at today, but it also was designed for some overclocking by including voltage adjustment capabilities.

Compared to the last Super Overclock card we saw, the 5870 Super Overclock is a far more custom card. If anything, while Gigabyte will never present it in that manner, it’s highly reminiscent of MSI’s previous generation of Lightning series cards. The Lightning series of cards are traditionally well-designed, so it’s a very good design to model a new card after.

Getting down to business, at the base of the Super Overclock is Gigabyte’s custom PCB, measuring 10.5” long. The Super Overclock is part of Gigabyte’s Ultra Durable VGA family, with Gigabyte advertising that there’s 2 ounces of copper in the PCB. On the back side of the card are 6 LED lights representing the VRM power phases, and on the front side are voltage check points.

Moving on, component selection is similar to the other cards in our roundup. Trademark to their Ultra Durable line, Gigabyte is using solid state chokes and solid capacitors throughout the card. Also on the card are NEC Tokin Proadlizer decoupling capacitors, which Gigabyte is using along with MSI. Gigabyte makes this a significant marketing point, clearly advertising that they are using 5 of them, with all 5 laid out in an obvious manner on the back of the card. This also gives us an excellent opportunity to see a Proadlizer up close – at first glance they’re easy to mistake for a GDDR5 chip.

Powering the card is a pair of 6pin PCIe sockets. Although 8pin power sockets aren’t a necessity for overclocking, this along with the smaller number of VRM phases are the two strongest signs that Gigabyte is not targeting the extreme overclocker quite like MSI is.

For cooling Gigabyte is using an assembly that strongly resembles MSI’s Twin Frozr, making this the other reason we keep comparing the Super Overclock to the Lightning series. At the base is a card-sized heatsink with 4 heatpipes attaching the heatsink to the baseplate over the GPU, and over that a pair of 80mm fans with a partial cover. Interestingly unlike MSI who orients their fans parallel to the card, Gigabyte has slightly tilted the fans on the Super Overclock so that they face the center of the card. Gigabyte cites this as being done to minimize turbulence; however we don’t have any practical way to confirm that. Meanwhile the entire cooler is partially covered, directing the bulk of the airflow towards the front and rear of the card. So like every other card in this roundup, you’ll want a well-ventilated case for this card.

As we mentioned previously a big part of this card is the factory overclock. Gigabyte is shipping the card with a 950MHz core clock and 1.25GHz (5GHz effective) memory clock, making the Super Overclock the fastest factory overclocked 5870 that we’re aware of. This gives the Super Overclock a solid 100MHz (12%) over the reference 5870 on the core clock, and more petite 50MHz (200MHz effective, 4%) overclock on the memory.

Much of this comes down to Gigabyte’s extra binning of their chips through their GPU Gauntlet binning process, which allows them to sell completed boards as various products (Ultra Durrable, Overclock, Super Overclock) depending on the speed the complete board can reach. Unfortunately Gigabyte is using a non-standard VRM controller here and so we can’t read the core voltage with tools such as GPU-Z, but we believe the card ships at 1.18v.

Finally for the hardware side of things, as with the rest of the cards in our roundup today, Gigabyte is using the standard Eyefinity port configuration: 2xDVI, 1x DP, and 1x HDMI.

As for the software side of things, the 5870 Super Overclock marks the introduction of a new piece of overclocking software from Gigabyte: OC Guru. OC Guru is Gigabyte’s latest shot at a video card overclocking utility, and unfortunately due to Gigabyte’s use of a non-standard VRM controller, it’s the only way to read and control the card’s core voltage. In theory OC Guru has many of the hallmarks of a solid overclocking utility – overclocking profiles, voltage adjustment, and even an OSD, but it lacks any real hardware monitoring/logging support, rendering it only suitable for controlling the card as opposed to monitoring it. 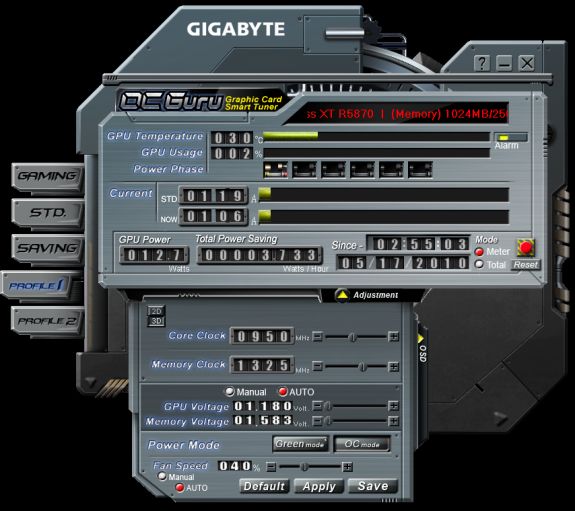 Even then OC Guru fails to adhere to the KISS principle, a problem that many other  manufacturer-supplied overclocking utilities also run in to. It’s poorly documented and unintuitive, laggy, and in the case of its power-consumption readouts flat-out wrong.  We’ll give Gigabyte credit here for at least trying, but ultimately you aren’t going to want to use this utility for anything more than you have to: voltage adjustment.

For voltage adjustment Gigabyte lets you increase the core voltage by up to 0.1v, putting the maximum core voltage at 1.28v. As with the MSI Lightning this is more than the cooler can handle, and we found that in practice the cooler could only keep temperatures manageable up to 1.26v. We’ll have more on this later when we take a look at overclocking.

Finally the pack-in items are your usual assortment of bare-bones items: a fairly generic manual, a driver/utility CD, 2 4pin molex-to-PCIe power adaptors, a CF bridge, and a VGA dongle.

The retail price of the card is around $500, similar to the other cards in our roundup. As of this moment it looks to be readily available.