This isn’t going to be a story about Microsoft’s return to dominance. Nor is it going to be the story of Microsoft’s failure to compete in the smartphone space. These mobile wars have only just begun and despite the advantage enjoyed by Apple and Google, there is no end in sight. In another twelve months we will see fierce competition from HP, Microsoft and Nokia. There’s a lot at stake, and no company is willing to give up the opportunity to own the next-PC market without a hell of a fight. Today is the beginning of Microsoft’s fight.

In the old days, when Microsoft tried to deliver a prettier UI it would just add lots of blue and make everything huge. That’s how we got XP. We never really lost the blue or hugeness, they were just made more refined through the years. 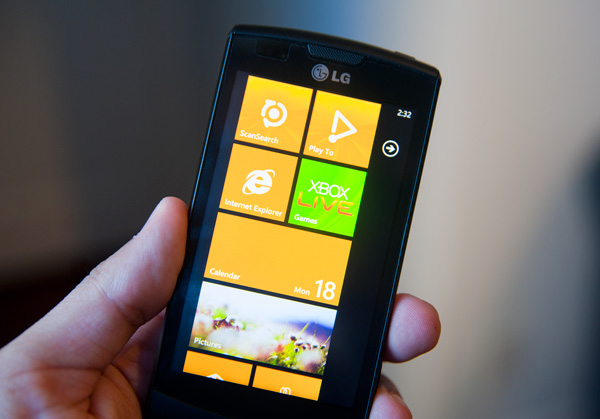 Windows Phone 7 is a significant departure from anything Microsoft has ever done in the past, from a UI standpoint that is. In my opinion it’s more beautiful than anything else on the market today - including Apple’s iOS. That’s a big statement for anyone to make about Microsoft, a company that has tried so very hard to prevent Apple’s increasing market share but always seemed to be at least one step behind in the user experience department. The Windows Phone 7 user experience is a big enough step forward to not only build a lot of faith in Microsoft’s mobile strategy, but also to give hope that future versions of the Xbox and desktop Windows OSes may be just as impressive. 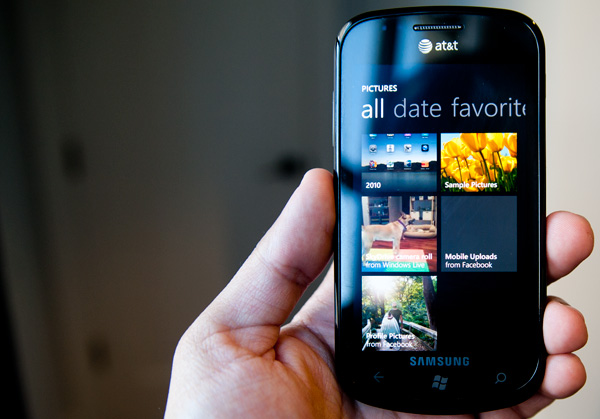 The underlying architecture is well engineered, high performing and extremely efficient - a testament to the fact that Microsoft continues to employ some of the world’s most talented software engineers. Microsoft’s engineering talent is often masked by the bureaucracy of a company with nearly a hundred thousand employees and multiple billion dollar businesses, but it exists.

From a technical standpoint, Microsoft has never lagged Apple. In many cases, features Apple offered in its Macs were first enjoyed by Windows users. Where Microsoft fell short was in delivering these features in the cleanest way possible. The focus was on functionality, not the best way to use it. I continue to believe that anything you can do on a Mac you can do on a PC, it’s just the manner in which you do it that separates the two. Apple’s growing marketshare is testament to the notion that a significant portion of the population doesn't want to do it Microsoft’s way.

Not the King, but a Start

I’ll say it now. Flipping through pages upon pages of square app icons just isn’t the most efficient way to do it. Folders help reduce the clutter, but they don’t fundamentally address the problem.

Apple never really tried the Start Menu approach but it achieved similar functionality in its desktop OSes. OS X gives you access to frequently used applications via the dock and for everything else you can either use Finder to navigate to them or Spotlight to search for them. Apple attempted to bring these features to iOS, but unfortunately not all of them translated well.

Using the system-wide search to launch applications doesn’t work as well on the iPhone simply because typing takes a lot longer on a smartphone than on a desktop/notebook. The dock is nice but it’s not nearly as wide on the iPhone. I’ve got 21 icons in my dock on my MacBook Pro, but you’re limited to 4 on the iPhone.

When you unlock your iPhone or Android phone you’re dropped into what’s effectively your smartphone desktop. In iOS, that’s just a collection of app icons with a 4-icon dock at the bottom. Android gives you more of a modern desktop with icons and optional widgets. Windows Phone 7 effectively drops you into the first layer of a start menu - that’s your desktop.

Microsoft calls it the Start screen. It’s a two page screen. The first page has a collection of square and rectangular tiles. These can be links to applications, web pages or even Bing Maps directions. The tiles can also link to Hubs, which are collections of applications and data under a common genre (e.g. the Xbox Live Hub is where you’ll find all of your games).

By default, the first four tiles are the same on all Windows Phones: Phone, People, Messaging and Email. 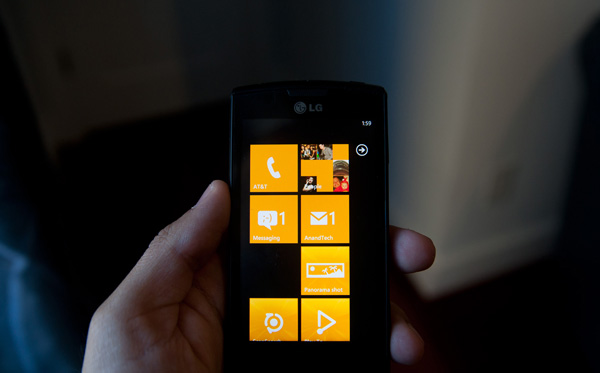 The next four are open for carrier customization. Carriers/OEMs can choose to populate as many of the next four as they’d like. While Microsoft won’t enforce a clean install on every Windows Phone, it does ensure that anything your carrier/OEM installs on top of the OS can be uninstalled. My Samsung Focus for example came with a bunch of AT&T apps. Not only can they be unpinned from the start menu, they can also be completely uninstalled. Carriers get the option to differentiate, but users get the option to say no, it’s a win-win situation. If you do a factory reset of your phone however, it will restore the phone to its original state - which will include reinstalling carrier/OEM installed apps. 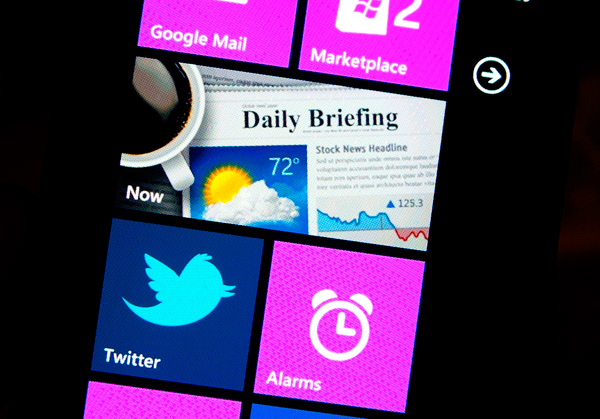 An example of an OEM installed app 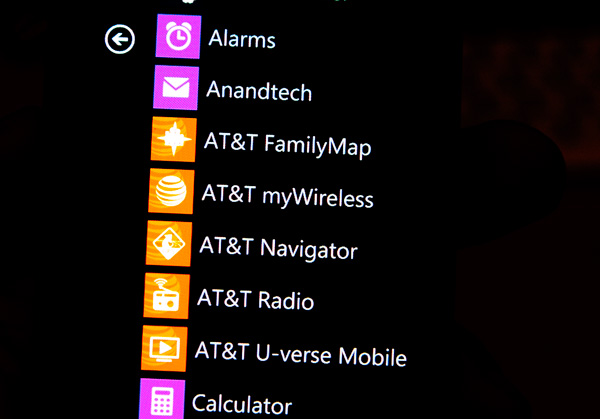 ...and the list of AT&T installed apps on the Samsung Focus

The start screen is completely customizable. You can change the order of the tiles and remove any or all of them if you’d like. I found Microsoft’s start screen to be more useful than the default home screen on both Android or iOS. There’s less clutter and more of what you use most frequently is front and center. It’s like the left hand side of your Start Menu in Windows, except instead of automatically populating based on frequency of use it’s static. I suppose at some point we might see a more dynamic Start screen in Windows Phone. The only complaint I really have is that the camera tile isn’t there by default, but a quick pin later and all is well with the world. 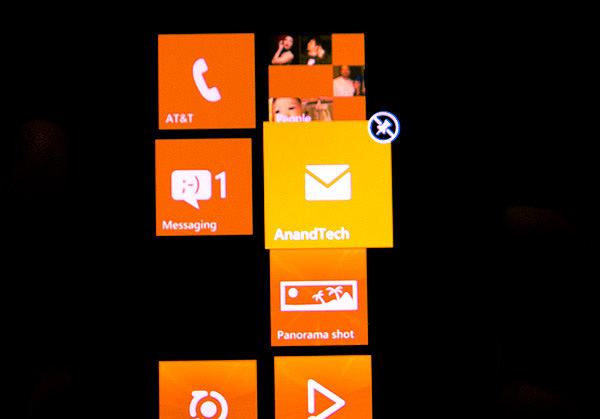 The Windows Phone UI is built primarily to be used in portrait mode. While many apps will rotate to landscape, the intended use is in portrait. To deal with the obvious width limitations of a portrait phone, Microsoft made it very clear that nearly every app is wider than a single screen. While Android and iOS treat each screen as a discrete page, Windows Phone gives you a little preview of the next page to help convey the wider-than-visible UI. As far as how it works, the experience couldn’t be more natural. Virtually all apps implement this wide UI, including the start screen.

The start screen is the most traditional of multi-page UIs in Windows Phone. There’s a little animated arrow in the top right telling you that there’s more to be found at the next screen. Tap the arrow or flip the page and you’ll get to the second page of the Start screen: a list of all of your apps on the phone. There’s nothing more to it, just a simple list of everything on the phone. The GPU accelerated UI makes scrolling through the list super fast and smooth. And to be honest, a list of apps in alphabetical order is a lot simpler to navigate through than pages of app icons. I suppose eventually Microsoft may have to introduce another organization element to the app list (nested folders anybody?), but for now it works well.