Dell XPS Laptops: Back to the Future

Dell XPS Laptops: Back to the Future

Originally launched as the Dell Xtreme Performance System way back in 1993, the acquisition of Alienware in 2006 and corporate restructuring eventually led to the XPS brand fading away. The Studio XPS line continued the legacy in part, with a higher emphasis on multimedia capabilities and mainstream gaming, but XPS has a strong legacy that many customers still remember fondly, and thus Dell is going back to the XPS brand and will let the Studio and Studio XPS brands now fade out of the limelight. (Note that current Studio products will continue to ship, but future products will now switch to either the Inspiron or XPS lines.) 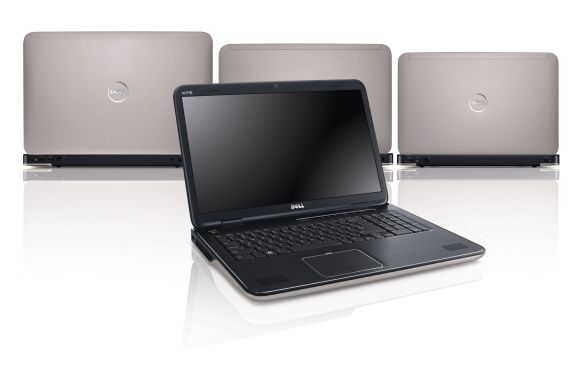 The primary reason for the relaunch appears to be branding: in the minds of many people, XPS stands for performance, and that's what Dell wants. What started out as a gaming brand eventually branched into other areas, and the focus is going to be less on enthusiast gaming—Alienware will continue to serve that market—and more on A/V enthusiasts and power users, as well as anyone else that values build quality, performance, and style over saving a buck. Dell states that the primary target is the A/V Enthusiast who has the latest and greatest home theater equipment and places a high value on multimedia, but mainstream gaming and content creation users will also find a lot of value here.

To coincide with the return of the XPS brand, Dell is shipping three new laptops as of today. In a sense, these three laptops replace the old Studio XPS offerings with updated features and performance, and they all look very nice. The three new models all have the same basic features, with size being a major differentiator; you can choose between 14", 15.6", or 17.3" (L401x, L501x, or L701x respectively), and in all cases you should get a high quality, good performance laptop.

The basic model for each size is similar: Core i5-460M (dual-core 2.53GHz, 2.80GHz Turbo), an NVIDIA 400M GPU with 1GB VRAM, 500GB 7200RPM HDD, 4GB DDR3 RAM, JBL + WAVES Audio, and a 2.0MP webcam with support for HD video conferencing. Some of the specifics differ, of course, like the LCD panels, speakers, and the specific GPUs. Beyond the basics, however, there are also plenty of upgrades, including support for quad-core processors, SSDs, more memory, upgraded GPUs, larger batteries, and different size power bricks. Worth note is that the 14" model lacks USB 3.0 ports while the other two include two ports; Dell informed us that it was a matter of not having enough room to fit another chip into the cramped 14" chassis—at least not without sacrificing something else. Below is the slide for configuration options. 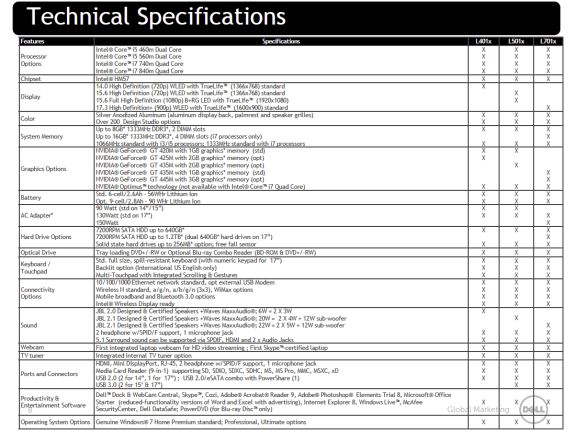 The 14" and 15.6" models both come with a standard 1366x768 resolution LCD, though we have no idea whether these are high contrast displays or run of the mill offerings. Considering the pricing and XPS brand, we're hoping for the latter, but we'll have to wait for our review samples before we can say more. The two smaller models also ship with a GT 420M standard, but the 14" offers a 425M upgrade while the 15.6" has a 435M upgrade. As for the 17" L701x, it comes with a 1GB GT 435M standard and has the option for a 3GB GT 445M—quite a bit of memory for a midrange GPU, but the 192-bit memory interface will at least be put to good use.

Video output options are the same across the XPS range, with all three supporting HDMI 1.4, mini DisplayPort, and capable of driving 3D HDTVs and external displays—note than none of the laptop panels are 120Hz, so 3D support comes strictly from external displays. Honestly, the 3D aspect just isn't a major deal for us, but HDMI 1.4 is a nice addition and the combination of 400M with HDMI 1.4 means 3D is a buzzword that marketing can throw around. If our experience with the GTS 350M is any indication, though, 3D gaming even on the GT 445M may be a stretch. Going along with the GPUs, all of the models support NVIDIA's Optimus Technology—at least if you use a dual-core CPU. That means you can get the best of both worlds when it comes to graphics performance and battery life, as long as you're not trying for both simultaneously. With no integrated graphics, the quad-core CPUs trade more powerful CPUs for battery life.

Dell also made a point of emphasizing the quality of the speakers in the new XPS laptops. Dustin was quite impressed with the speakers in the Studio 17, and the new models look to build on that legacy and improve audio output even further. The speakers are JBL certified and are capable of pushing out enough sound to fill a room without distorting. They use Waves MaxxAudio 3 to enhance the audio quality, and while most of us probably haven't heard of Waves, it's apparently used by quite a few audio professionals. The goal here appears to be kicking HP's Beats Audio solution down a notch, and there's no upsell necessary—every XPS laptop will include the high quality speakers and Waves. We'll be testing this in the near future, obviously, and it's certainly an intriguing feature; hopefully we can get an Envy for comparison as well….

Rounding out the features is a 720p capable webcam that makes these the first Skype-certified laptops ever. Skype has put the laptop/webcam through rigorous testing to verify it provides a premium experience, and the combination of a high quality webcam and the premium speakers got their stamp of approval. We're still not sure what exactly differentiates this 2.0MP webcam from other 2.0MP and 3.0MP cameras, but having done enough blurry/pixelated chats over the past few years I'm really looking forward to seeing what the XPS webcam can do for video conferencing.

With all the premium components selected for the XPS line, it's also nice to see that the build quality received its share of attention. Anodized aluminum panels are used on the display back, palm rest, and speaker grilles. That's not so far out of the ordinary, but Dell is also using a magnesium alloy frame for the main structure—something typically associated with ThinkPad and other sturdy business laptops. The bottom of the laptop will be plastic (color matched to the rest of the exterior), but everything else should be a big step up from the cheap plastic so prevalent in the consumer space.

So welcome back, XPS—we've missed you! The changes and improvements Dell is making come from customer feedback, and they've tried to exceed users' expectations. One area we know caused some problems with the Studio XPS 16 was the power adapter, and Dell appears to have addressed that with larger adapters coming standard with graphics upgrades, so that peak power draw will still be well below the rated output. With build quality, performance, style, and battery life all on tap, the new XPS laptops ought to be able to shake up the laptop world and provide some real competition to the MacBook Pro, HP Envy, and Sony VAIO offerings.