The Optimus 7 is the first LG phone we've ever looked at. In fact, it's the first device we've received directly from LG. I will say that out of all of the smartphone makers, LG is at least the most forthright about its products. We got very little marketing associated with the phone, just blunt statements about what it is and what it isn't:

"Look, you already know Microsoft has put some very strict guidelines on the hardware for these smartphones so the challenge from the start was how to physically stand out in a field where specs are going to be virtually the same.

Optimus 7 has a couple points we're quite proud of, namely:

But we recognize hardware differences aren't enough to stand out among more-than-capable competitors like Samsung and HTC. The user experience is what we think will separate one device from the next in the WP7 world.

And in this regards, we think we have a solid strategy of delivering software solutions which are unique to just our WP7 device:

And we're proud of the fact that we don't load Optimus 7 with a lot of "LG apps" or a fancy animated UI which gets old in a few weeks. :-)

But Optimus 7 isn't "optimal" in all aspects, either. Maybe we should have offered a bigger screen. Which isn't to say we don't think 3.8" isn't big enough, we think it's a good trade-off for usability and long battery life. But you know how people react when they see a 3.8" next to a 4.3".

Well, it's our first attempt, I'm sure we'll learn a lot from this experience."

I have to say, if all companies behaved like LG I might just be out of a job. Other than the screen, LG's assessment of its own phone is shockingly accurate. 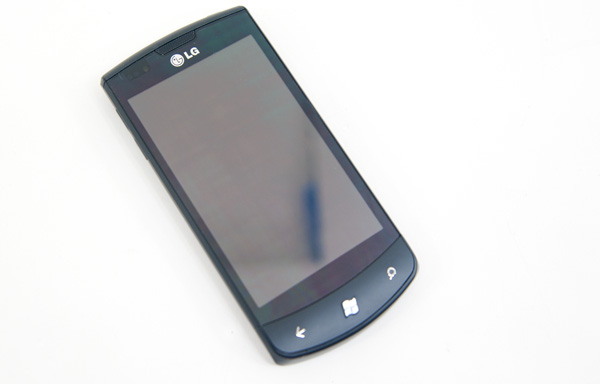 It does have a solid and substantial feel to it, the Optimus 7 is very well built. Weighing in at 157g, it has all of the weight of the iPhone 4, plus a bit extra. It's not what I'd consider too heavy, just hefty. 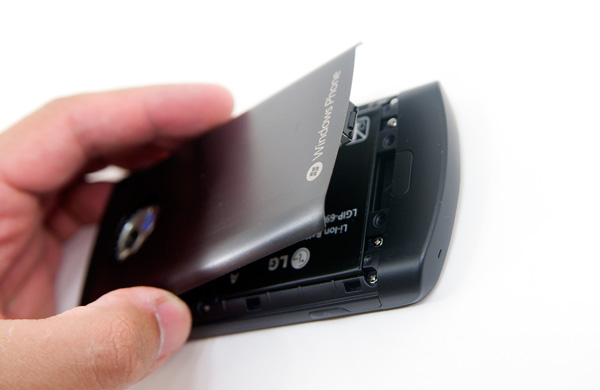 The weight is all in the materials. You get a solid metal housing and a brushed aluminum backplate. The back cover is spring loaded; press down on the release button and it'll pop up slightly.

The Focus is thin and wide. I appreciate the thickness but I'd prefer it if Samsung opted for a narrower design. LG on the other hand I believe got the form factor down pat. A lot of this is personal preference, but I do believe the sweet spot for Windows Phones may be around the 3.8-inch mark. All navigation elements in the OS are big enough where you don't need a huge screen to get around quickly. And the larger screen doesn't really add anything, particularly at the same resolution. I don't believe the same is true for Android phones, but for WP7 I don't believe bigger is necessarily better. Funny that the ideal Windows Phone size is very similar to the iPhone, given how similar Microsoft and Apple's OS design philosophies were.

LG opted for physical buttons on the Optimus 7. It's actually more like a really long rocker switch than three individual buttons, but it works well. You get confident feedback from every button push.

All Windows Phones must have a physical camera shutter release button. On the Optimus 7 this button protrudes more than I'd like. I found myself accidentally hitting the camera button while fumbling around with the phone.

As an aside, while I appreciate the requirement for a hardware shutter release, I do believe it's a mistake not to allow for a software capture button as well.

The battery is huge for the Optimus 7. The 3.8-inch HTC Surround has a 4.55Whr battery, while the 4.0-inch Super AMOLED Focus has a 5.55Whr battery. The Optimus 7 falls smack in the middle of those two. You get a 3.8-inch low power LCD display like the Surround but with the battery capacity of the larger Focus. As you may have already seen, the Optimus 7 delivers the longest web browsing battery life of any of the three Windows Phone 7 devices we've tested thus far. 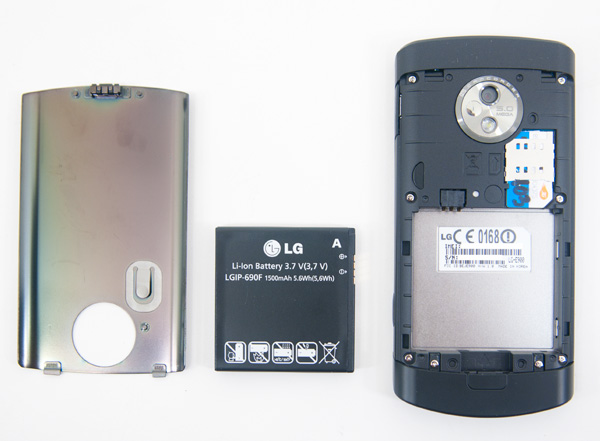 The Optimus 7 ships with 16GB of internal NAND and there's no user accessible microSD slot to change things. The larger NAND capacity does work well on WP7 because of how media-focused the OS is. It arguably provides a better audio/video playback experience than the iPhone.

I'll get to the software in a moment, but LG does ship some of the more useful apps I've seen from a Windows Phone 7 OEM.

Unfortunately the Optimus 7 isn't headed for any carriers in the US. It's available in Canada, Europe and Asia.