Our session with David Chien began with the marketing line of ECS as a company, and the goals which they strive to achieve.  Any media situation such as this is an opportunity for any company to reel off the positive numbers rather than the negative – for example, we were informed that ECS is experiencing a 5% growth on their product sales quarter on quarter, compared to the tech industry standard of 3-4% (unfortunately I cannot verify this, it is an ECS figure). 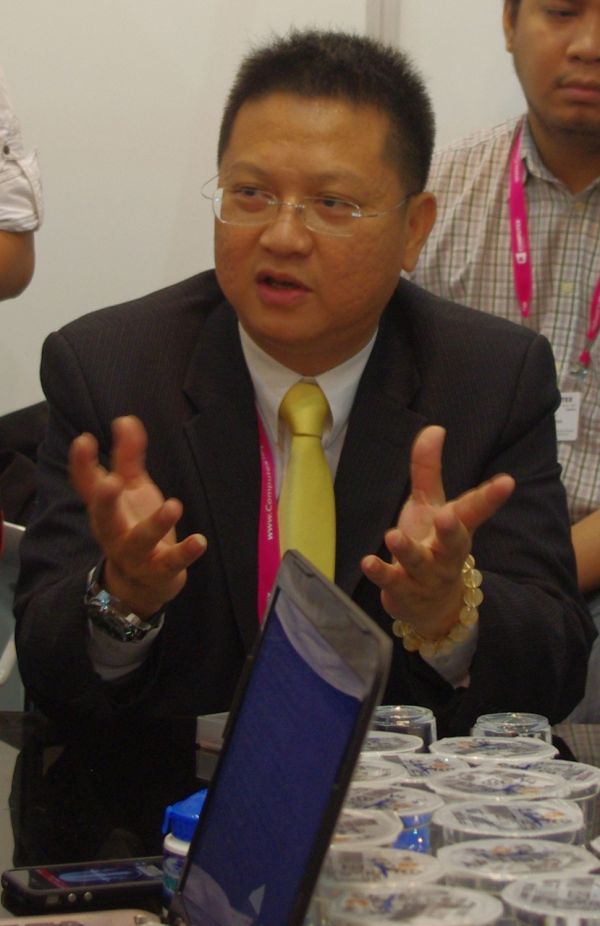 In his initial pitch, he stated that ECS have plans for tablets – by developing Intel as a strategic partner, they are planning to produce a seven inch and a ten inch tablet using the Oak Trail platform with the MeeGo operating system.  These are due around September.  Also in the works are the promotion of their All-in-One SKUs, the G10 and G11, featuring Sandy Bridge platforms – presumably the mobile chipsets.

In terms of Motherboards and VGAs, he was keen to stress that consumers are being well looked after, despite OEM sales being more than 75% of ECS sales in total.  He mentioned several times the new eBoost technology that ECS are bringing to the AMD platforms, including A75, which offers at the touch of a button an automatic 33% overclock.  This sounds a relatively impressive feature to support across such a chipset, meaning that the power delivery across the range must be strong enough.  He did not state whether this was a CPU or iGPU overclock though, but liked to point out that it gave a 2x GPU score boost, quoting a score of 8000 over 4000 at stock – but surprisingly enough, no mention of a benchmark.  Then there was also the hint at a Haswell mini-ITX in the works.

In terms of the Q&A, unfortunately my sounder recorder was malfunctioning and so I cannot quote David word for word, however, I will summarize the questions asked at the Q&A session as accurately as I can.  Those marked IC are ones I asked (which happened to be numerous) in the time allowed.

Q: Is ECS coming out with a Tegra 2 system with Android?

A: ECS believes there are limitations with the Android system, seeing it more as a smartphone platform rather than an OS geared towards tablets.  Microsoft has been relatively slow in coming to the market with an appropriate OS version for tablets, but ECS are tentatively waiting for Windows 8 to be available, and combining it with an Oak Trail platform.  Until then, SKUs will be shipped with MeeGo – with the 10 inch primarily for the EU/NA markets, and the 7 inch for Asia.

IC: In terms of market research, how does ECS determine future markets?

A: Internally, we get our departments to work with each other and with our customers to define future products – especially in terms of our OEM sales.  It is important to stress that in most product segments, people only remember the top five – for example with motherboards, people remember ASUS, Gigabyte, ASRock, ECS/MSI (IC: depending on region), and then maybe one other who in reality has a minimal market share.  So it is hard to break into new markets quickly, and be one of the products that people remember.

Q: In terms of Latin America, what steps are you taking to provide consumers with products?

A: (Note, DC talks mainly about Brazil here and was possibly a bit confused) In certain countries, such as Brazil, the government discourages imports from non-native companies by taxing those imports very heavily – they like to keep products from within their own state.  As a result, ECS are working heavily with local partners in order to ensure our product reaches retail at reasonable prices to our competitors.  In terms of Latin America, we are number one in selling to OEMs, and in Eastern Europe, we are number four.

A: In terms of growth, we are seeing a 5% increase in quarter to quarter sales, compared with the 3-4% growth the industry and Intel is seeing.  This is in part due to the release of the iPad 2, which has decreased sales to netbook providers, but also due to the Japan earthquake which has caused certain shortages in electronics production.  But ECS are still the number three seller to OEMs worldwide.

IC: ECS were initially an OEM retailer – how as ECS overcome the dogma of ‘standard’ products into producing enthusiast level equipment?

A: For ECS, there are two extremes in terms of motherboards in particular – on one level there are the OEMs, and on the other there are the enthusiasts.  Particularly to the enthusiasts, branding is very important – that is why we will be promoting the specifications of our products and technologies such as eBoost for our AMD platforms.  As a comparison, ECS want to be seen like we see Toyota – stable at a reasonable price.  However, we are obviously looking to the future of enthusiasts and overclockers.

IC: ECS currently sell VGA cards, but only using the standard reference design and coolers.  Are ECS planning to expand this range to custom PCB and cooler designs?

A: The VGA market is very dangerous and volatile at this time – with Intel’s Sandy Bridge graphics and AMD’s APU solutions providing proportionally more performance every generation.  To proceed beyond the reference designs, we need to move step-by-step, which requires a great deal of time and money.

Unfortunately, there was no more time to ask questions, even though I still had several planned.