The Sony Ericsson Xperia Play: Where Do You Want To Take Your Gaming Today?

The Xperia Play's form factor was the topic of an opinion-filled, entertaining and informative recent cyber-debate between Anand, fellow staffer Brian Klug, and myself. Anand, who briefly had the Xperia Play before transferring it to me, commented, "it may be light for a slider but I really wasn't pleased with the thickness or build quality for that matter, it all felt too thick and loose." I, on the other hand, was quite pleasantly surprised with its seemingly svelte shape and diminutive weight, both in an absolute sense and relative to the two other phones currently in my possession, an Apple iPhone 4 (Verizon) and a Google Nexus One (AT&T).

The table below shows how the three handsets stack up from a factor standpoint, along with a HTC Evo Shift (Sprint) that I recently had the opportunity to handle. For grins, I also included my previous work phone, a Motorola Droid whose design whose first production dated back to October 2009. And finally, I tossed in the slider that I owned prior to that; the very first Android handset, the T-Mobile G1 dating from October 2008:

Here's how the Xperia Play looks when placed side-by-side with the Nexus One: 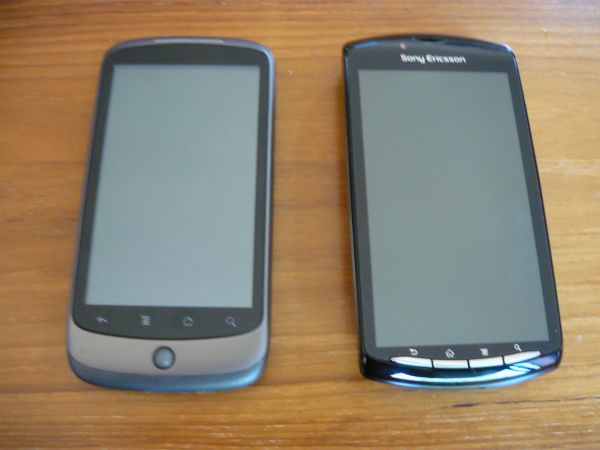 Anand's right, of course, the Xperia Play is thicker (and heavier) than either of the two phones I own. But as I note in the above table, that's largely because it's a 'slider' form factor; as such, it's identical in thickness to the HTC Evo Shift (and thinner than the geriatric G1). Whether or not Sony Ericsson was wise to devote the lower layer of the 'slider' to gaming-centric functions versus a generic physical keyboard (as with the HTC Evo Shift, Motorola Droid and T-Mobile G1) is a discussion that I'll save for later in this writeup. And to that point, keep in mind that the Xperia Play is notably thinner than a dedicated portable gaming console; the upcoming PlayStation Vita is 0.73 inches thick, for example, and the Nintendo 3DS is an even more bulbous 0.83 inches deep.

To me, part of the reason that the Xperia Play doesn't feel as bulky as its specs would otherwise suggest is because of its tapered shape, which results in its thickest-girth portions being in areas that are cradled by the palm of your hand but with a design that still allows it to lie flat when put down. Conversely, the 'industrial' design of the iPhone 4 seems bulkier to me than its specifications reveal to be the case; note that it's the thinnest of the bunch! More generally, by this point in time I tend to find that pretty much all smartphones are 'good enough' from both thickness and weight standpoints to comfortably fit not only in the hand but also in a shirt or pants pocket, with the possible exception of ultra-large-screen models such as the HTC Evo.