The ASRock CoreHT 252B package contained the following:


The industrial design is nothing to write home about. The pleasing rounded edges are reserved for the higher end Vision series. The CoreHT series has to make do with a sharp edged chassis very similar to the first generation Core 100HT. 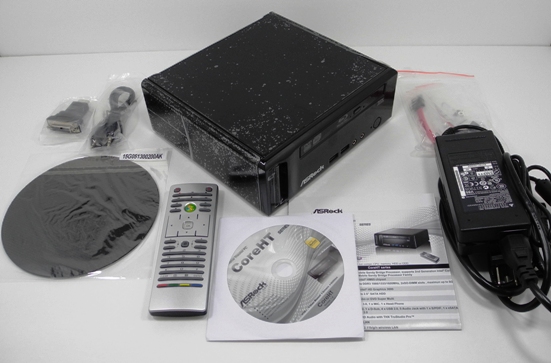 When compared with the Core 100 from last year, we find that two of the USB 2.0 ports at the rear end of the unit become USB 3.0 ports in the CoreHT. The front panel remains the same except for the structure of the ventilation slot which is now curved in (instead of the planar slots in the Core 100) and the shape of the power button is now circular instead of the square in the last generation unit.

Just like a notebook, this unit also supports simultaneous display on two monitors. Testing was done mostly with the HDMI output connected to a Toshiba REGZA 37" 1080p TV through an Onkyo TX-SR 606. For non-media playing related testing, the HDMI port was connected to an Acer H243H 1080p monitor.

Our review unit shipped with Windows 7 x64 Ultimate and a OEM version of Cyberlink PowerDVD for Blu-Ray playback. However, the OEM version doesn't support 3D Blu-rays and is also crippled with respect to the number of audio channels that can be decoded / HD audio passthrough. To test these, we installed the full versions of both Cyberlink PowerDVD 11 as well as ArcSoft Total Media Theater 5.

We will conclude this section with a table to summarize the data and A/V connectivity options for the ASRock CoreHT 252B HTPC.

Data Connectivity Options for the ASRock CoreHT 252B