As NVIDIA’s 28nm GPU supply situation has improved over the past couple of months we have seen their partners finally begin to branch out with unique designs. The first such cards were the requisite factory overclocked models, and more recently semi-custom and finally fully-custom cards have started appearing.

With the floodgates finally open for custom cards we have recently received several different GeForce cards covering a range of performance levels, prices, and cooler configurations. Over the next couple of weeks we’ll be taking a look at such GTX 670 and GTX 680 cards from Asus, EVGA, MSI, and Zotac. NVIDIA is going through a period of tight control over their partners’ designs, but this hasn’t stopped their partners from putting their own unique touches on their cards.

Nowhere is this embodied more than with our first card, EVGA’s GeForce GTX 680 Classified. In EVGA’s product hierarchy the Classified is their top of the line product, where they typically go all-out to make customized products to scratch the itch of overclockers and premium buyers alike. The GTX 680 Classified in turn is EVGA’s take on a premium GTX 680, resulting in a card that is monstrous in virtually every sense of the word. What has EVGA seen fit to do with their fully-custom GTX 680, and does it live up to the hype and the price tag that comes with the Classified name? Let’s find out.

Perhaps before we start anywhere else, it’s best to start with a quick explanation of our particular interest in fully-custom video cards.

All things considered, NVIDIA usually turns out solid reference card designs. For their high-end single-GPU cards NVIDIA typically uses balanced designs that are reasonably quiet, reasonably cool, and have some degree of overclocking potential. On the other hand NVIDIA also tends to go conservative in some ways, with NVIDIA favoring blowers so that their reference cards work in most cases, and rarely overbuilding their cards in order to keep the manufacturing cost of the card down.

This is where custom cards come in. NVIDIA’s reference design is a jack of all trades but master of none, which leads to their partners creating custom products not only to differentiate themselves from each other, but to target specific niches that the reference design doesn’t do a good job of covering. Even just replacing the cooler while maintaining the reference board – what we call a semi-custom card – can have a big impact on noise, temperatures, and can improve overclocking. But at the end of the day there’s only so much you can do with NVIDIA’s reference boards, particularly when it comes to form factors and overclocking. This leads us to fully-custom cards. 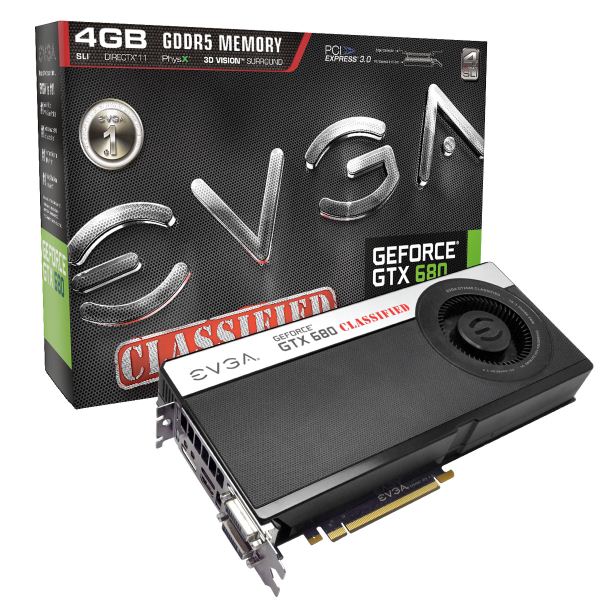 The bulk of fully-custom designs for such a high-end GPU are intended to focus on overclocking, and for good reason. Because NVIDIA is shying away from hardcore overclocking on the GeForce 600 series – something we’ll get to in a bit – to push GK104 to its limit and beyond a fully-custom card is necessary. These kinds of custom cards primarily allow partners to lay down bigger, better, and more VRM circuitry to improve power delivery and allow more power to be delivered overall, but it also allows partners to try their hand at improving the memory bus, adding support for additional memory chips (for more memory in total), and adding features above and beyond what NVIDIA directly provides. Whereas NVIDIA needs to worry about the larger market partners can worry about their niches, and in the world of premium cards it’s all about pushing GPUs to their peak.

This brings us to EVGA’s GeForce GT X 680 Classified, a card that embodies all of these design principles. Fundamentally of course it’s a factory overclocked GTX 680, with EVGA shipping the card at 1111MHz for the core clock and 6GHz memory, representing a 105MHz (10%) core overclock, but no memory overclock. The factory overclock is only half of the story though, as more so than any other GTX 680 card the GTX 680 Classified is meant to be overclocked. Even without voltage adjustment the card has a fair bit of headroom thanks to the binning EVGA does for its product lineup, and with voltage adjustment the limits can be pushed even further. But more on that in a bit.