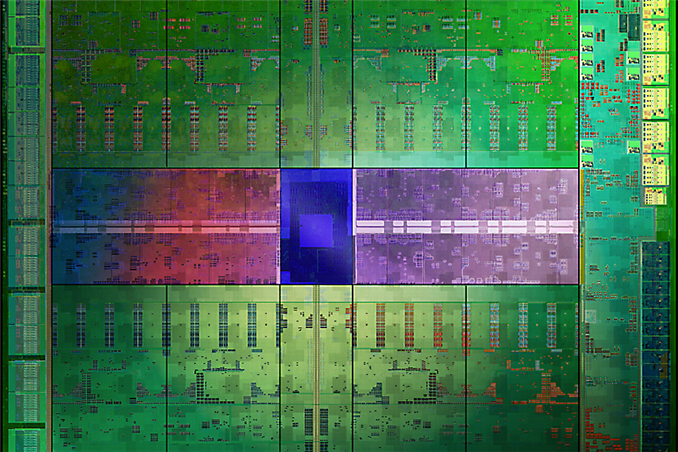 Earlier today NVIDIA announced that it would begin licensing its Kepler GPU architecture to 3rd parties. This is a sensible next step for NVIDIA, but an unprecedented one among the two remaining discrete PC GPU suppliers.

Note that what NVIDIA is announcing today is contrary to AMD’s semi-custom approach to SoC production. AMD is offering to build (semi) custom tailored silicon to customer needs, while NVIDIA is taking a more ARM-like approach and offering its GPU IP to 3rd parties for integration on their own. In other words, NVIDIA is looking to compete with ARM and Imagination Technologies rather than AMD or Qualcomm.

NVIDIA views its IP licensing business as additive rather than in lieu of its current GPU and SoC businesses. Time will tell whether or not this ends up being the case, but it’s quite obvious that at NVIDIA’s current size it wouldn’t be able to go after all GPU markets on its own - enabling others to do so makes a lot of sense from that perspective.

It Doesn’t End with Kepler: Future NVIDIA GPUs to Be Licensed 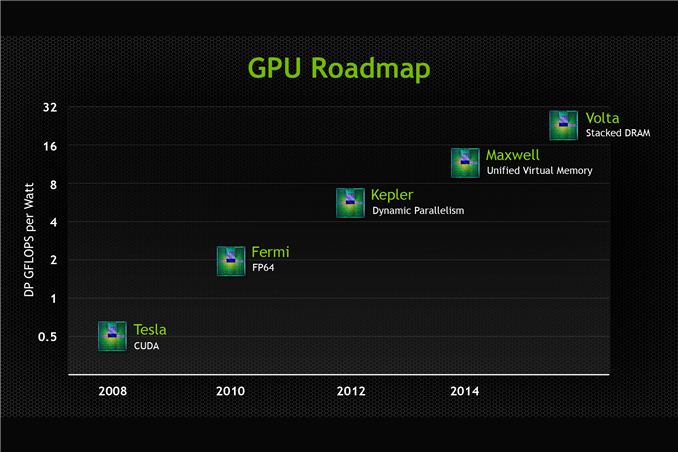 I asked NVIDIA about future GPU architectures beyond Kepler, and the answer was pretty awesome: future GPU architectures will be available to licensees at the time of tape out by NVIDIA. Licensees can choose whether or not to adopt an architecture right away or wait for any potential revisions, similar to what ARM does with its cores (e.g. Tegra 4i uses a later revision of the Cortex A9 core). This move has huge implications. Theoretically a licensee could bring an NVIDIA GPU to market before NVIDIA itself, although that does seem pretty unlikely. What we could see however is a licensee introduce a GPU configuration that NVIDIA had no intentions of bringing to market.

The model makes a lot of sense and expands NVIDIA’s role in the computing world beyond its life in PCs. In the PC space, NVIDIA built discrete GPUs that system integrators (and end users) put in their machines. In the post-discrete world where SoCs rule the landscape, NVIDIA believes it can be just as relevant by doing the same. The difference here is instead of NVIDIA building cards out of its GPUs and selling them, the SoC manufacturer would be responsible for all integration. It’s the same playbook, just modified to deal with the new world around it. 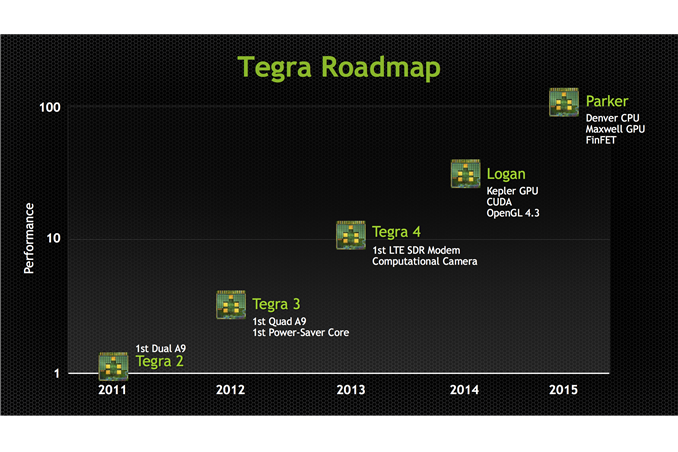 NVIDIA is quick to point out that Kepler is its first mobile to high-end GPU architecture. Capable of scaling from smartphones (Logan/Tegra 5 next year) to supercomputers (Titan), Kepler is inherently very flexible and makes a lot of sense as NVIDIA’s first target for its IP licensing program.

Although mobile is an obvious fit for Kepler licensing, NVIDIA hopes its GPUs will be used in new markets as well. NVIDIA’s refrain sounds quite similar to AMD’s. Neither knows where the next big market will be, but both want to be prepared for it when the time comes. It won’t be too long before smartphones and tablets reach their own Ultrabook moments when performance becomes good enough for the majority of the market and attention shifts elsewhere. When that happens, NVIDIA (and AMD, and others) believe that opportunities for continued growth will appear in new markets (e.g. TVs, wearables, other connected compute devices).

Although it’s clear that the greatest point of interest with today’s announcement revolves around getting NVIDIA’s GPU designs and graphics IP into new products, at a high level perspective NVIDIA has made it clear they’re licensing their visual computing technology, and that this isn’t just a play for graphics. As part of keeping themselves open to new markets, NVIDIA has told us that they’re essentially willing to do whatever makes financial sense as far as licensing goes, with both compute and graphics on the table. So at the same time as licensing out their graphics technology, NVIDIA has also opened the door to licensing out CUDA and their other GPU compute innovations if the price is right.

This can lead to several possibilities, ultimately relying on who’s interested and what market they represent. At a most basic level, licensing an NVIDIA GPU will get the buyer CUDA – binary compatibility and all – thanks to the fact that this would be the same hardware CUDA already runs on. However in the new “anything is possible” licensing system of NVIDIA, CUDA could also be licensed out separately. Device makers who simply want to add CUDA support to their devices, either to take advantage of some of the runtime’s unique functionality or merely to enable easier porting from existing NVIDIA systems, can now license the necessary CUDA IP from NVIDIA. The GPU computing market is still very young with a number of competing technologies, but thus far based on actual usage CUDA has proven to be a front runner compared to more widely supported (and open) environments such as OpenCL, so while NVIDIA is still trying to bring further users onto CUDA, they also have a CUDA user base they can leverage today.

The most obvious avenue for any potential CUDA licensing would be HPC users looking for greater integration beyond today’s CPU + GPU setups we see in systems like Titan. However NVIDIA is also pursuing this with forthcoming SoCs like Logan and further products integrating their Denver CPU, so it’s not a market that’s being ignored by NVIDIA. On the other hand more novel uses of GPU compute in the embedded space, encompassing everything from TVs to automotive to traditional appliances, are areas that have been identified as potential growth avenues for GPU computing by NVIDIA and other GPU firms in the past, not all of which NVIDIA is directly serving right now. In all of these cases licensing can focus on CUDA, or even more broadly just licensing specific NVIDIA compute technologies that would be useful to include in these products; even obscure technologies like Kepler’s low-overhead soft-ECC implementation could potentially be of value as a licensed technology.

The cynic in all of us can point to NVIDIA’s struggles with getting Tegra 4 into devices and out the door as motivation behind wanting to license its GPU IP. Beating Qualcomm has proven to be very difficult. Even Intel has had a wonderfully difficult time of making its way into the mobile space. So is that what this licensing play is all about? To an extent, perhaps.

Had Tegra 4 been out and available, I think it’s safe to say that the SoC would likely have been used in at least some previous Tegra 3 design wins. Tegra 4i will hope to do the same for smartphones. I see no reason for these businesses to stop, but I think it’s quite obvious that there’s a huge gap between where the Tegra business is today and where Qualcomm is.

By licensing its GPU IP, NVIDIA opens itself up to additional customers (and revenue) that otherwise wouldn’t have considered it. I doubt Apple would ever use an off-the-shelf Tegra SoC, but NVIDIA can now compete for Apple SoC business alongside Imagination Technologies. Should Apple decide to one day drop Intel altogether and bring all of its CPU design in house, it now has a GPU vendor it can license cores or technologies from - just like it does with ARM. The exact same goes for Samsung.

Both Apple and Samsung have histories of licensing GPU IP from Imagination. NVIDIA now has a chance of going after that business.

The same could be said at the other end of the spectrum. The mobile SoC wars we saw unfold over the past few years are about to heat up in the server market. Where integration of high performance GPU architectures makes sense in servers, NVIDIA now has an offering to those that are interested. 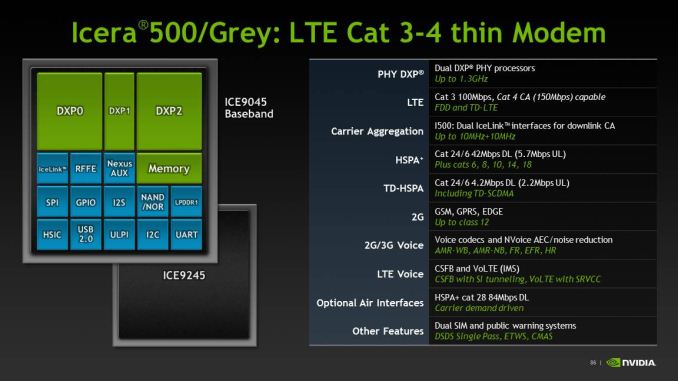 NVIDIA isn’t officially announcing plans to license its Icera modem IP, but I’m told that’s the next logical step. NVIDIA is investing handsomely in Tegra 4i and its modem architectures, but similar to its GPU business - in order to address a much larger market, it will have to consider licensing that IP.

Although unexpected from a timing perspective (we had no hint that NVIDIA was going to drop this on us today), NVIDIA’s move to license its GPU IP is very sensible. All growth markets where compute is concerned are moving forward with high levels of integration. For NVIDIA to not only remain relevant in the broader world but also grow with it, it must have a strategy in place for markets where integration is required.

Where those new markets are, and ultimately what this means for NVIDIA’s financials is beyond the scope of our analysis - it’s simply the right (only?) move.