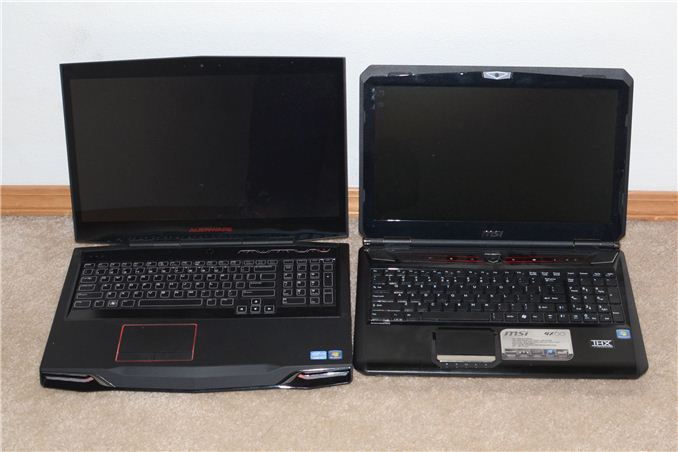 Dustin recently posted our first review of a notebook equipped with NVIDIA’s latest mobile tour de force, the GeForce GTX 780M. With a theoretical computational performance increase of 30% relative to GTX 680M and 39% more memory bandwidth, the GTX 780M should be stomping all over the competition from AMD. What’s more, the Radeon HD 8970M doesn’t really help matters, as the only change from the 7970M is a Boost clock that’s 50MHz (6%) higher. Except, either due to our particular MSI GT70 sample being a lemon and having CPU throttling issues (or it may be a design problem that affects all of MSI’s current GTX 780M notebooks—we’re not entirely sure), the 7970M really isn’t that far off the GTX 780M performance. But there’s more to the story than just pure performance.

I’ve had an MSI GX60 notebook for a while now, along with an Alienware M17x R4. Both are equipped with AMD’s previously top-performance HD 7970M, and as I just mentioned the 8970M doesn’t look to radically alter the amount  of performance you’ll get out of AMD’s mobile GPUs. Both of the notebooks come with Enduro Technology enabled, allowing you to switch between the integrated graphics and discrete graphics on the fly. If all goes as planned, not only do you get seamless switching between GPUs, but you don’t lose any performance. There’s only one problem with Enduro to date, really; in a word: drivers.

My first look at the latest Enduro drivers came nine months ago with the Clevo P170EM—and it’s worth noting that at the time 7970M had already been selling for several months. We’re now talking about hardware that has been on the market for over a year, which ought to be more than enough time to get all the kinks worked out. Since the initial “Enduro 5.5” release in September 2012, we have seen quite a few driver updates. Some have fared better than others, and I’ve tried my best to test them all. I’m not going to try to dig through all of the old driver results here, as most were tested with our now-deprecated gaming suite. The latest updates from AMD (13.3 Beta3, 13.5 Beta3, and now 13.6 Beta) have mostly felt the same, with a few performance tweaks aimed at recent releases.

With our gaming suite now fully updated, I felt it was time to pull out the 7970M and specifically look at a couple items. First, there’s naturally the question of how 7970M/8970M compare to NVIDIA’s 680M/780M hardware—using the M17x R4 with a GTX 680M and MSI’s GT70 Dragon for the 780M. Second, we want to see how performance changes when looking at a 7970M paired with an A10 Trinity APU and an i7 Ivy Bridge CPU. Thanks to the M17x R4, we also wanted to see how much—if at all—Enduro is affecting performance in games. Finally, just to put the HD 7970M with A10 APU performance in perspective, I’m including performance results from AMD’s Trinity using the integrated HD 7660G as a reference point. The 7970M offers up something like four times the performance potential of the 7660G, so in cases where we see significantly less performance scaling from the dGPU we’re likely running into CPU related bottlenecks.

Incidentally, I’m only looking at gaming results here—the MSI GX60 arrived with a flaky Win7 install, and I eventually updated it to Win8 but in the process lost the ability to control LCD brightness and a few other items, so battery testing is out. Then there’s the storage subsystems, with the GX60 using RAID 0 64GB SSDs for the OS and a 750GB HDD for mass storage while the Alienware M17x shipped with only a 750GB HDD, making PCMark discussions largely meaningless. There have also been a few other minor concerns, with the short summary being that it’s not really fair to try to compare performance across a wide suite of benchmarks. Besides, most of what we’re interested in with this sort of hardware is gaming/graphics performance.

If you want to see additional scores, you can look at Mobile Bench, or let me know what other tests you would like to see and I can try to accommodate such requests. With that out of the way, here’s the quick summary of the two “new” test systems—the other systems included in the charts are the already mentioned MSI GT70 Dragon and the M17x R4 with GTX 680M. Also, in case you missed reading the MSI GT70 Dragon review, the performance was far lower than expected due to CPU throttling issues. We will see about updating the information with a future review, but for now let's just say going into this that the GTX 780M is being held back by our test laptop. Pay attention to how that thermally handicapped system stacks up against some of the other notebook here, though, as it will give a good idea of when games/settings are hitting the CPU cores harder than others.

You’ll note that the Alienware M17x R4 is no longer available from Dell, but you can still find a few resellers that carry it. The GX60 we received is also being phased out, to be replaced by a new GX60 with a Richland A10-5750M APU and HD 8970M dGPU. The M17x also came with 6GB RAM, but it’s still able to run in dual-channel mode (at a very slight performance penalty). Since we’re not testing anything that hits the storage or memory all that hard—and all games are installed to the 750GB HDD on each laptop—we’re mostly going to be looking at CPU and GPU performance as it applies to games.

We’ll have three results for the HD 7970M to look at in the graphs: HD 7970M in Enduro mode with the A10-4600M, Enduro mode with the i7-3720QM, and in discrete-only mode on the i7-3720QM. The latter option requires a reboot to enable/disable Enduro, and we also saw a few anomalies with Enduro rendering on the Alienware system. It’s possible that this is a problem specific to the M17x R4, and the problem didn’t manifest in Skyrim with earlier drivers, but as of the latest 13.5 and 13.6 beta drivers I experienced severe flickering in both Skyrim and StarCraft II on the M17x. Disabling Enduro cleared up the problem, but I created a video of the problems if you’re interested.

And with that out of the way, let’s hit the benchmarks.