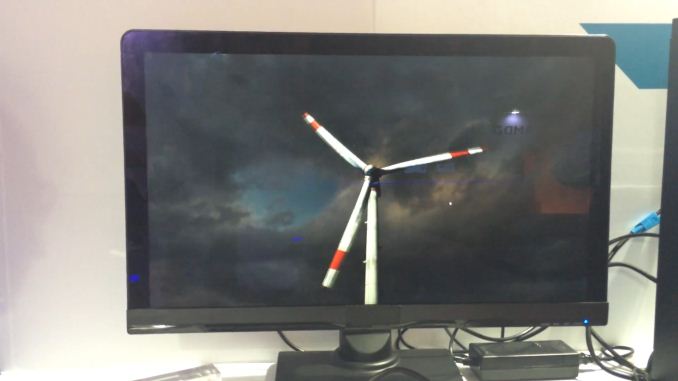 Our very own Anand Shimpi just got off of the Computex showfloor for a bit after paying a visit to AMD’s booth. Among the items AMD is showing at Computex is the current status of their FreeSync project, whose base feature of Adaptive Sync was recently added to the DisplayPort 1.2a standard as an extension.

First announced at CES 2014, FreeSync is AMD’s take on variable refresh monitors, utilizing some variable refresh functionality first designed for embedded DisplayPort (eDP). At the time AMD was showing off the concept on laptops (due to the need for eDP) but are back at Computex with an update on the project.

Here at Computex AMD is showing off the first prototype monitor that is FreeSync capable, which interestingly enough is based on a retail monitor that was hardware capable and could be converted with updated firmware. AMD’s actual demo hasn’t changed – they’re still running the fan blade demo we saw at CES 2014 – but it’s now running on external monitors. The monitor in question operates with a fairly narrow range of rates of just 40Hz to 60Hz, which for the purposes of a prototype is good enough to showcase that the technology works, though it is narrower than the refresh ranges AMD is expecting for retail monitors.

At this point AMD is emphasizing that while they were able to get FreeSync up and running on existing hardware, owners shouldn’t be expecting firmware updates as this is very unlikely to happen (though this is ultimately up to monitor manufacturers). Instead AMD is using it to demonstrate that existing panels and scalers already exist that are capable of variable refresh, and that retail monitors should not require significant/expensive technology upgrades. Meanwhile AMD is also holding to their earlier projection of 6-12 months for retail monitor availability with retail prototypes expected around September, which puts final retail availability potentially as early as very late this year, but more likely into the first half of 2015.

Finally we have a video interview of the FreeSync demo in action. It bears mentioning that YouTube is limited to 30fps, so while we can give you some idea of what FreeSync performs like it’s not a fully capable representation. That will have to wait for closer to release when we can sit down with a high speed camera.