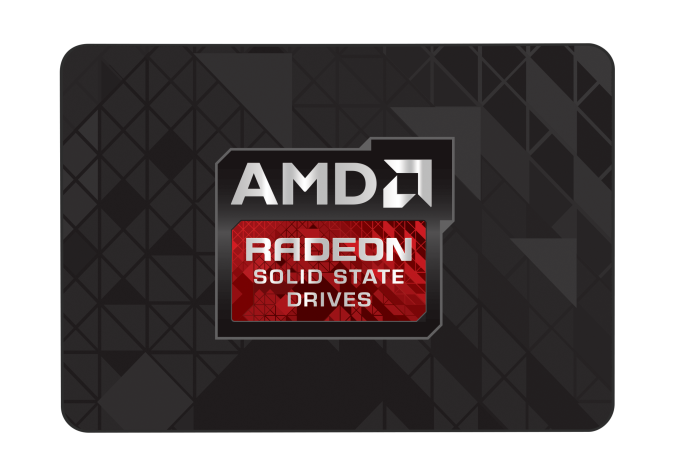 Back in 2011, AMD made a rather unexpected move and expanded its Radeon brand to include memory in addition to graphics cards. With today's announcement AMD is adding another member to its Radeon family by releasing Radeon R7 Series SSDs. Similar to AMD memory, AMD is not actually designing or manufacturing the SSDs as the product design and manufacturing is handled by OCZ. In fact, all the customer support is also handled by OCZ, so aside from the AMD logo AMD is not really involved in the product.

Partnering with OCZ makes sense because OCZ's focus with the Barefoot 3 platform has always been gamers and enthusiasts and that is the target group for AMD's R7 SSDs as well. OCZ is a now owned by Toshiba, so OCZ has direct access to NAND with guaranteed supply, whereas fabless OEMs (e.g. Kingston) could face supply issues that might harm AMD. Here's the quick overview, which of course will be essentially the same as certain existing Barefoot 3 products.

The R7 is based on OCZ's own Barefoot 3 controller and it is the same higher clocked M00 version (397MHz) as in the Vector 150. The new ARC 100 and Vertex 460 use the M10 version, which runs at 352MHz instead of 397MHz but is otherwise the same silicon. Performance wise the R7 SSD is very close to Vector 150 with slightly lower random write performance, although random read performance is marginally better in turn.

The biggest difference between the two is endurance as the Vector 150 is rated at 50GB per day for five years (91TB total) while the R7 is rated at 30GB per day for four years (43TB total). The firmware in the R7 is tailored for AMD, although I was told that the customizations are mainly wear-leveling related to increase endurance over the Vertex 460, so there should not be any surprises in performance. The NAND is also different as the R7 utilizes Toshiba's A19nm MLC, but OCZ should be making the switch to A19nm across its whole client SSD lineup soon to cut costs.

The motivation behind AMD's move is identical to the reason AMD entered the memory market. AMD wants to provide users an "AMD-only" experience by offering as many of the components as possible. Another argument AMD had is that providing more AMD branded products makes it easier for novice PC builders to pick the parts because the buyer does not have to go through the trouble of deciding between dozens of products and making sure the parts are compatible with each other. In addition to providing an easier purchase experience, AMD can also use the R7 SSDs in bundles and promotions, which is definitely more lucrative than using third party components.

Of course, the ultimate reason behind the move is that SSDs are becoming a mainstream product, and they provide another revenue source for AMD. AMD has not been doing that great financially lately and having an extra low risk revenue source is definitely welcome, even though client SSDs are not exactly a high profit market anymore. Then again, AMD is not investing much into SSDs since development and manufacturing is done by OCZ, so even if Radeon R7 SSD sales end up being low, AMD has no long-term investment to protect. The announced pricing is generally in line with what we're seeing for the existing OCZ Vector 150 products, though mail-in rebates can actually drop the Vector 150 below Radeon R7 SSD levels.

All in all, the R7 will not provide much from a technological standpoint since it uses the same platform we have tested several times, but it will be interesting to see how AMD bundles the R7 with other AMD products. AMD now has an opportunity to provide even more extensive bundles (CPU/APU, GPU, RAM and SSD); all that's left is for AMD to begin offering Radeon branded motherboards, power supplies, and cases to provide the ultimate AMD-only experience. Whether that happens remains to be seen, but AMD is trying an aggressive bundling strategy to increase their desktop CPU sales.

We have samples of the Radeon R7 SSD on the way, so stay tuned for the full review!