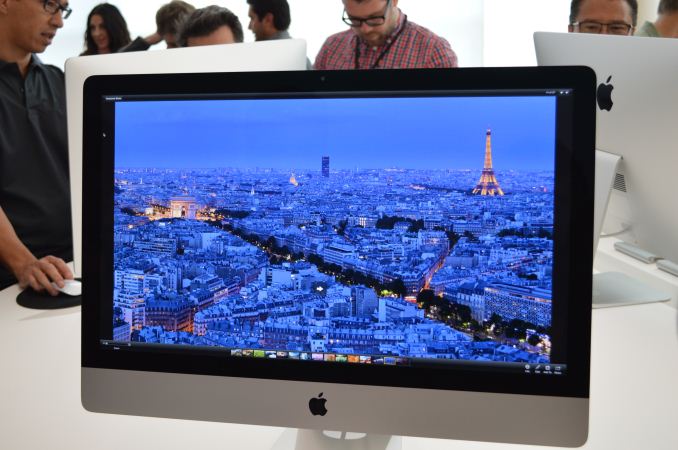 We just got done with our hands-on time with Apple’s new products, and we’ll start with what’s likely the sneakiest of them, the iMac with Retina Display.

Why “sneaky”? The answer is all in the HiDPI display, which Apple calls the “Retina 5K Display”. The retina display is definitely the star of the new iMac, as the rest of the hardware is largely a minor specification bump from last year’s model. In fact turned off you’d be hard pressed to tell the difference between the 2013 (non-retina) and new retina models, but the screen is immediately evident once on.

At 5120x2880 pixels, the new Retina 5K Display is precisely 4x the pixels of the 2560x1440 panel in last year’s model. What this means is that Apple can tap their standard bag of tricks to handle applications of differing retina capability and get all of it to look reasonably good. This also means that 2560x1440 content – including widgets – will scale up nicely to the new resolution. Apple does not discuss whom they have sourced the panel from, but given the timing it’s likely the same panel that is in Dell’s recently announced 27” 5K monitor. 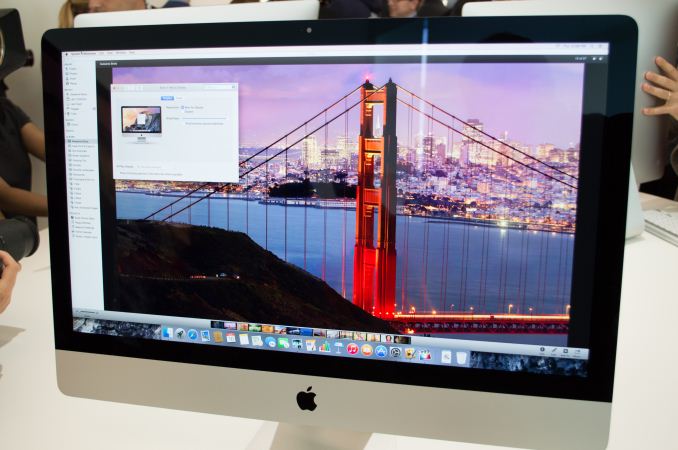 Much more interesting is how Apple is driving it. Since no one has a 5K timing controller (TCON) yet, Apple went and built their own. This is the first time we’re aware of Apple doing such a thing for a Mac, but it’s likely they just haven’t talked about it before. In any case, Apple was kind enough to confirm that they are driving the new iMac’s display with a single TCON. This is not a multi-tile display, but instead is a single 5120x2880 mode.

This also means that since it isn’t multi-tile, Apple would need to drive it over a single DisplayPort connection, which is actually impossible with conventional DisplayPort HBR2. We’re still getting to the bottom of how Apple is doing this (and hence the sneaky nature of the iMac), but currently our best theory is that Apple is running an overclocked DisplayPort/eDP interface along with some very low overhead timings to get just enough bandwidth for the job. Since the iMac is an all-in-one device, Apple is more or less free to violate specifications and do what they want so long as it isn’t advertised as DisplayPort and doesn’t interact with 3rd party devices.

Update: And for anyone wondering whether you can drive the 5K display as an external display using Target Display Mode, Apple has confirmed that you cannot. 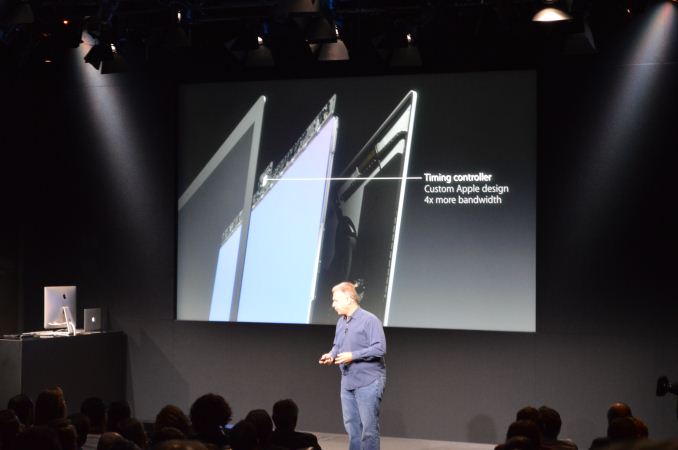 Meanwhile driving the new display are AMD’s Radeon R9 M290X and R9 M295X, which replace the former NVIDIA GTX 700M parts. We don’t have any performance data on the M295X, though our best guess is to expect R9 285-like performance (with a large over/under). If Apple is fudging the DisplayPort specification to get a single DisplayPort stream, then no doubt AMD has been helping on this matter as one of the most prominent DisplayPort supporters.

The rest of the package is very similar to the 2013 iMac. It comes with an Intel Haswell desktop class CPU paired with 8GB or more RAM, 802.11ac support, and Apple’s SSD + HDD Fusion drive setup. Apple now offers a higher speed CPU upgrade option that goes up to 4GHz (4.4GHz Boost) – likely the Core i7-4790K – that should make the high-end iMac decently more performant than last year’s model by about 10%.