Due to the level of consistency between BIOSes and software packages within the same chipset from the same company, our overview of the X99-Gaming G1 WIFI almost mirrors the one of the X99-UD7 WIFI package that we reviewed during the launch of X99.

For X99, several things have changed for the BIOS. The classic mode gets a facelift and moves to a cleaner but blockier interface with a good contrast between text and background. In the HD mode, the text now all fits in the boxes and there is some improvement to adjust the visual differentiation between background and text, but more could still be done. Interactivity is still quite minimal, with classic and HD mode featuring many of the same options slightly rearranged.

The first entry screen is the Startup Guide which is the main recipient of text adjustment, but we also get a few more options to fill up this 3x3 grid. 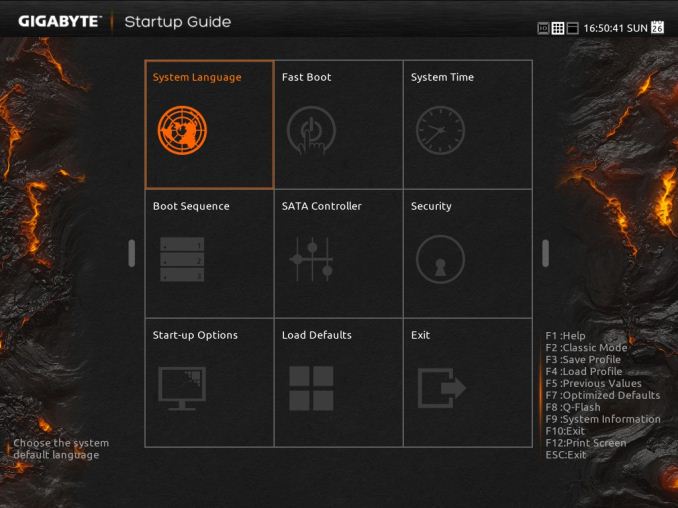 Most of these are self-explanatory. Fast boot gives options related to Windows 8 such that devices are not initialized until later in the OS boot process, speeding up overall POST time: 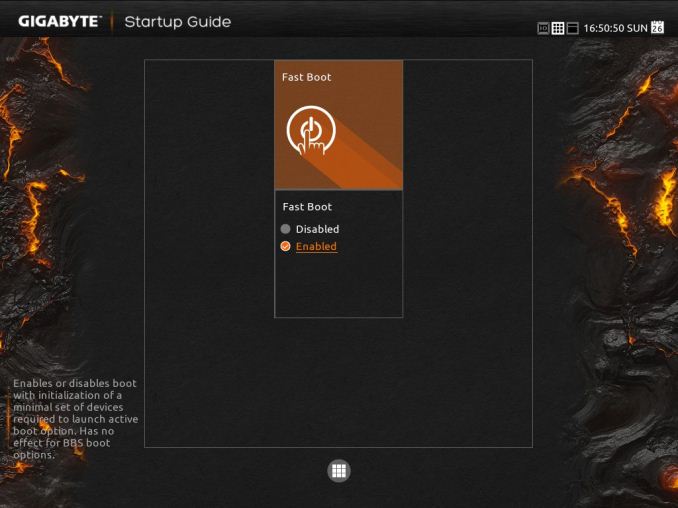 The SATA controller option text now all fits nicely into each of its boxes, although due to the dual AHCI controller nature of the chipset and only six SATA ports having access to RAID, it does not help the user much if the drives are plugged in the wrong ports: 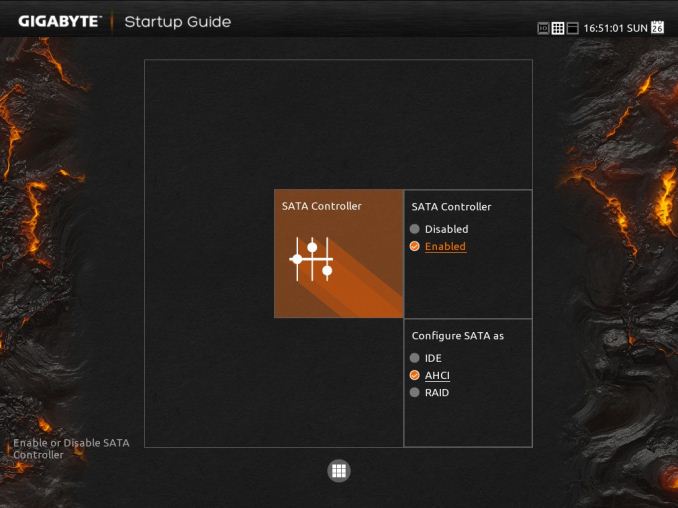 Ideally we would see an explanation giving SATA versus sSATA ports on the motherboard used, and what drives are installed where. 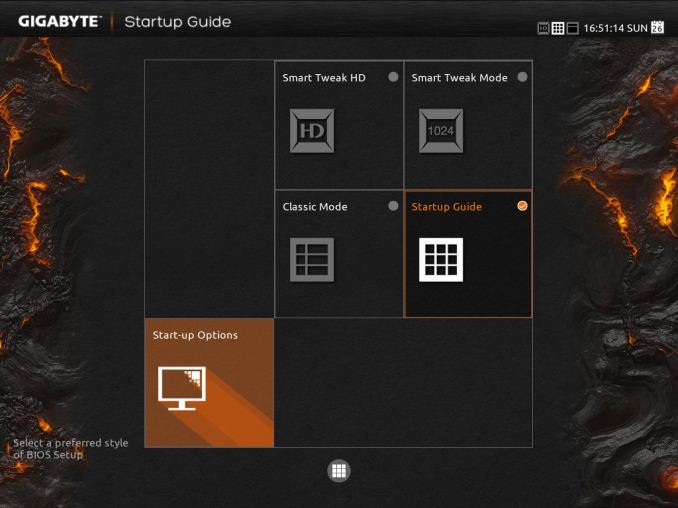 The Startup Options allows the user to boot into any of the four modes available. The HD mode does offer a smaller sized version with less information if the monitor is not capable of 1920x1080.

Despite a nice start guide for users, it would help if the initial screen detailed the system, perhaps in the top left. We want to see the name of the motherboard, the BIOS used, the CPU installed, the DRAM installed and frequencies where possible. That way any user trying to debug the system without having access to the insides will be able to see immediately what is at hand. 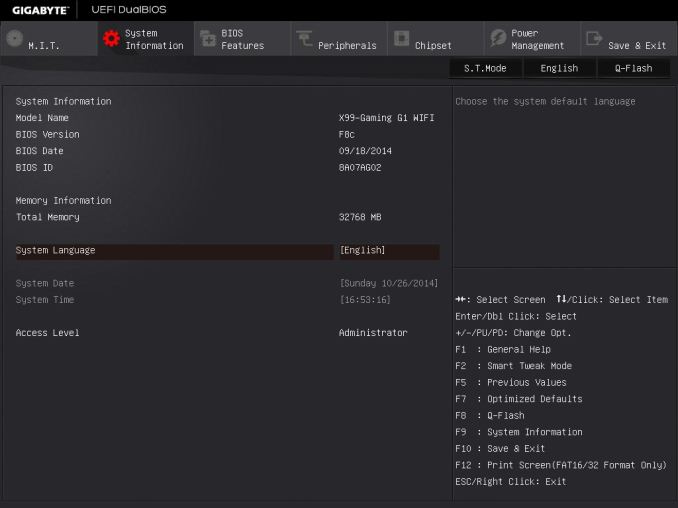 The standard classic mode gets an update from the blue interface to a sleeker grey and white menu system. The layout is pretty much the same as before, along with the information provided. For example, the entry point offers the model name of the motherboard and the BIOS version, but no mention of the CPU installed. 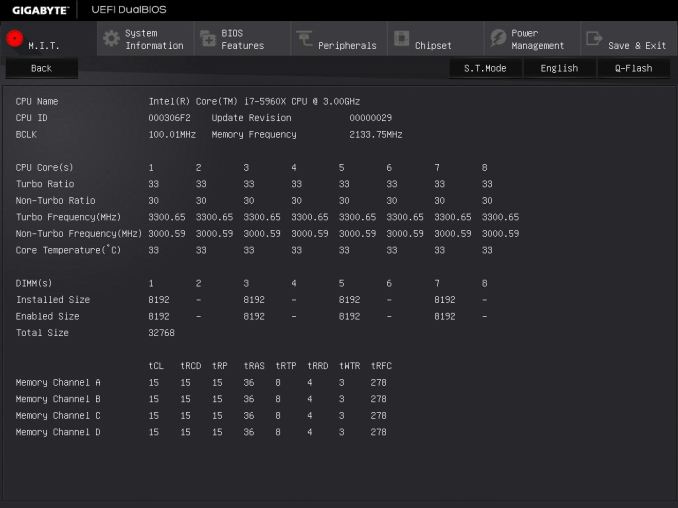 The overclocking options in the GIGABYTE BIOS are only for manual overclocking, and split into several sub-menus coming from MIT. The Frequency menu allows the user to adjust the CPU and DRAM: 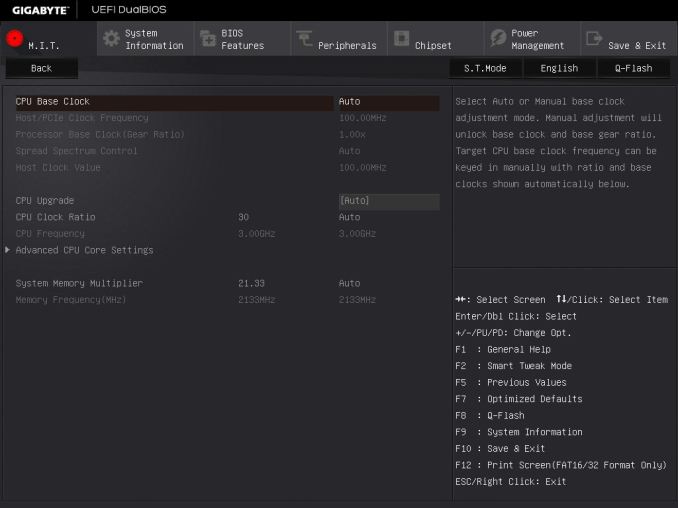 In order to adjust the per-core ratios or the Uncore and C-states, the CPU Core Settings menu is provided: 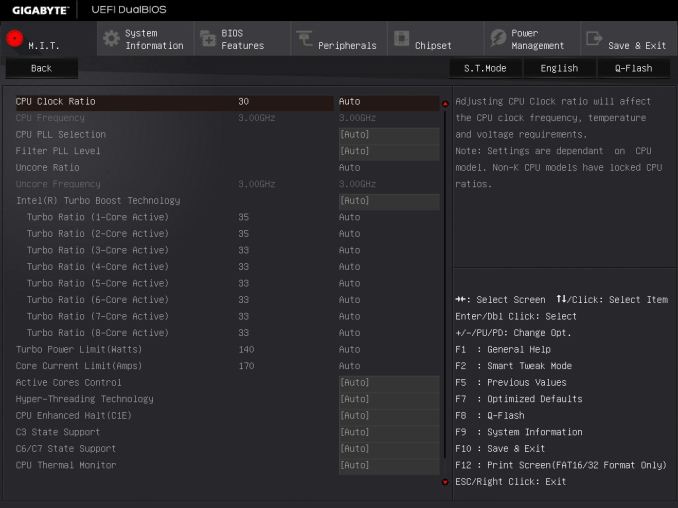 Note that there are no voltage options in either of these menus. GIGABYTE’s reasoning is that the voltage options are solely for the voltage menu, but I differ. Motherboard manufacturers can place the same option in multiple menus, but often choose not to for reasons of layout or space or to avoid confusion. I do not see that as an issue – if anything, I believe it would enhance the experience especially for an enthusiast wanting to adjust these settings. So while the voltage settings are not duplicated, the DRAM frequency strap is – we see it here in the Advanced Frequency menu and also in the Advanced Memory menu: 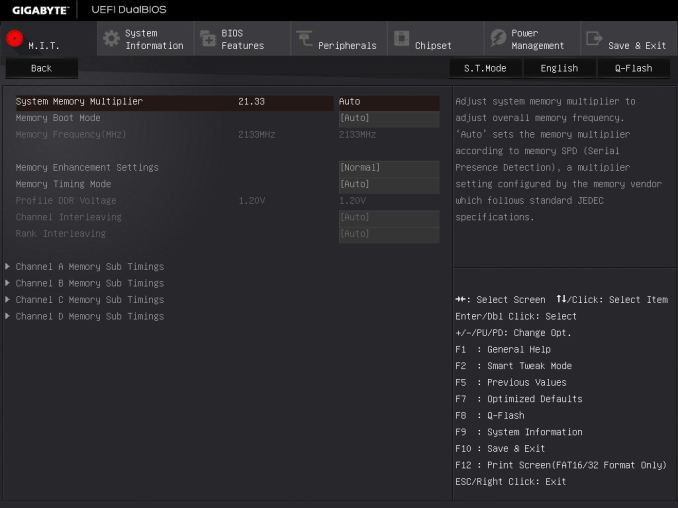 It makes no sense to duplicate this option and not others.

In order to adjust sub-timings for the memory, as with previous GIGABYTE motherboards, the memory timing mode must be changed to ‘Manual’ to set a rule for all modules or ‘Advanced Manual’ to set per-module timings. 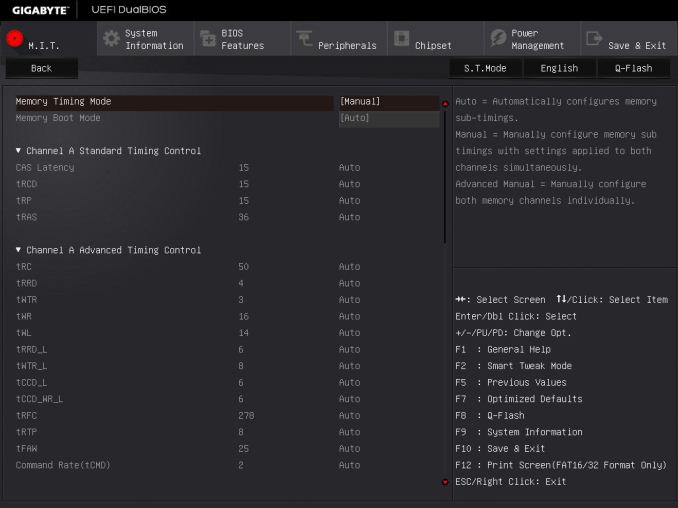 GIGABYTE has adjusted how the BIOS communicates what each option means to the user in the top right of the screen. I remember one of my contacts at GIGABYTE was writing the initial drafts for these info texts earlier in the year, and remarking that it was no small feat especially after several iterations and then sending it to the translators for other languages and making sure no subtleties were lost.

The Advanced Voltage Setting menu is split into several sub-options. 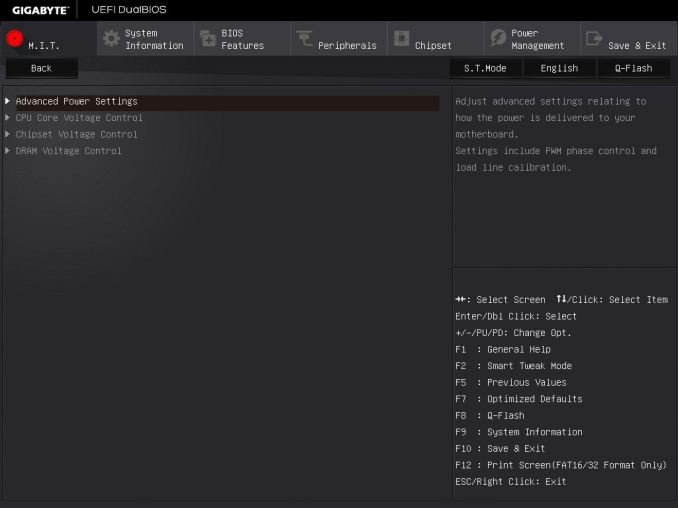 The Power Settings menu is for voltage protection options, current protection and switch rate adjustment. The most important option though is the Load Line Calibration for the FIVR: 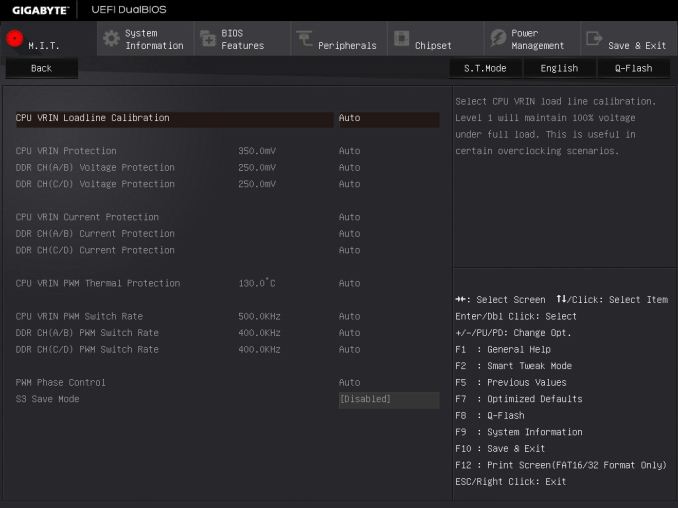 As mentioned in the help text, the top setting will maintain 100% voltage at load to combat the regular voltage drop across the processor as the workload varies.

The Core Voltage menu is where the meat of the CPU voltage options are: 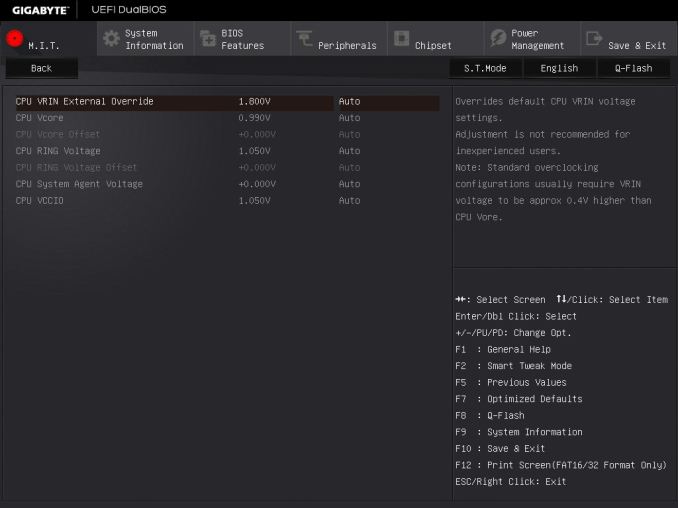 Adjustments to the VRIN (FIVR), VCore and Cache voltages are here, with only absolute values allowed. Other manufacturers offer both offset and absolute choices for these values although I find offset values more applicable for automatic overclocking options.

The fan controls in the classic mode are in the PC Health option from the MIT tab. 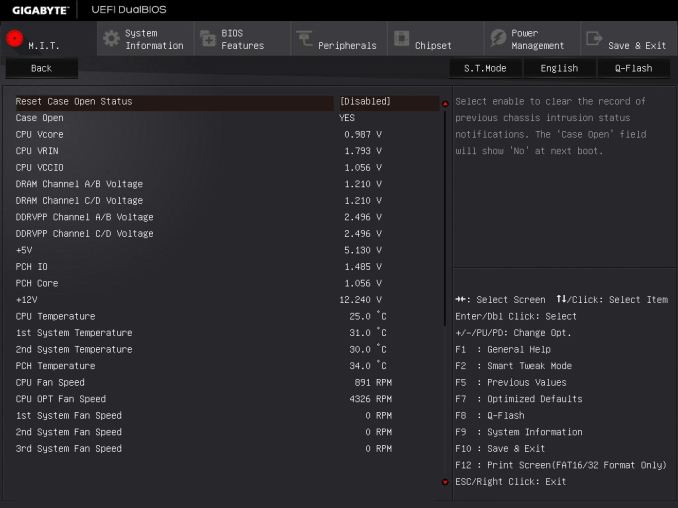 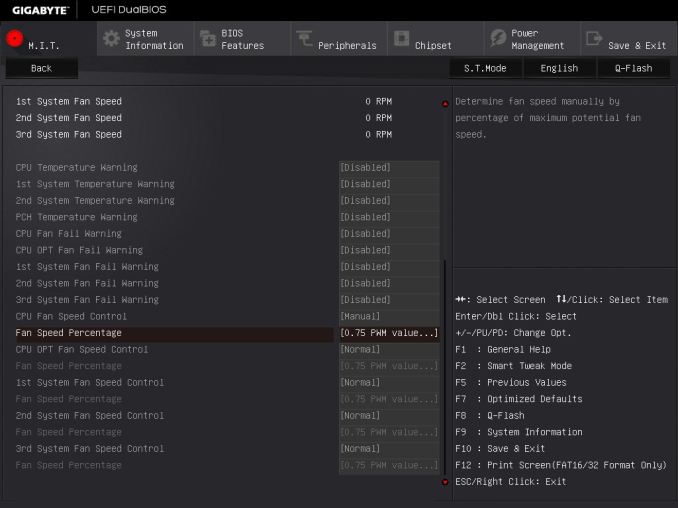 While the system has four temperature sensors and five fan headers, the level of fan speed options in the BIOS is very basic. 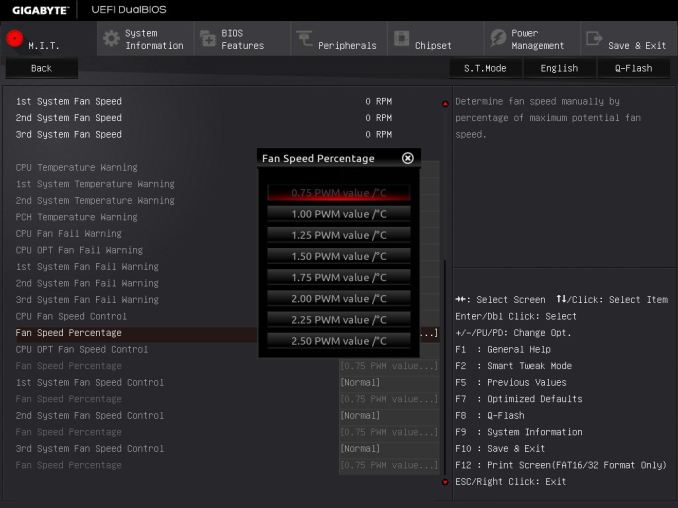 For anyone not used to a value describing how one variable adjusts with another, the options here might make no sense. The power applied to a fan is a ‘PWM’ number from zero to 255. GIGABYTE’s options allow you to adjust that value based on the temperature, in terms of ‘PWM per ºC’. So a CPU temperature of 50ºC at 2 PWM per ºC will give a value of 100, which means that 100/255 = 39.2% of the full power of the fan is used. To confuse the matter even more, a fan does not respond linearly to power increases, and GIGABYTE does not mention of this value has a base number.

Other manufacturers have the fan controls in the BIOS at a state where they are a lot easier to follow, and GIGABYTE has fallen behind in adapting their controls to a more interactive interface that is easier to understand.

The BIOS Features tab relates to the boot order and fast boot options: 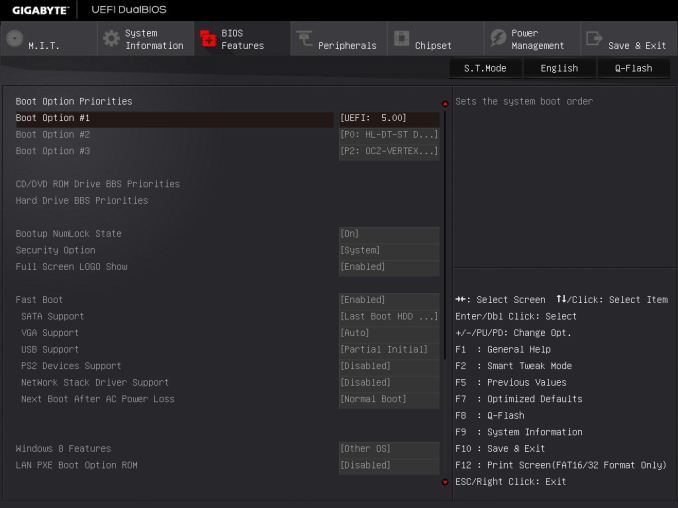 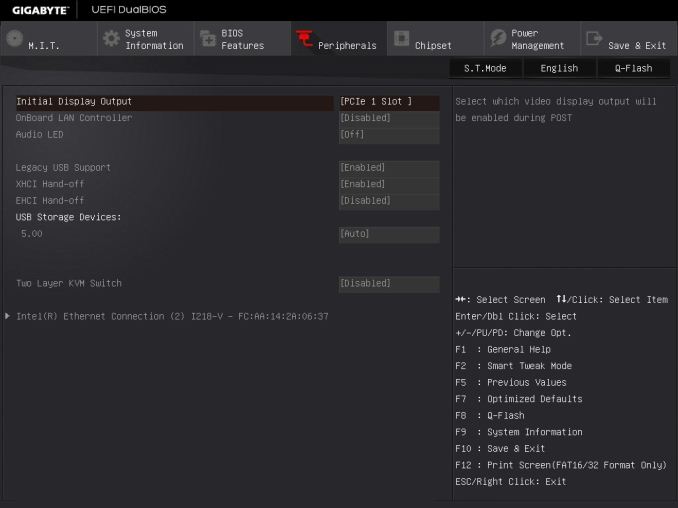 The Chipset tab is for SATA adjustments, with GIGABYTE offering different menus for the sSATA (non-RAID) and SATA (RAID) AHCI controllers: 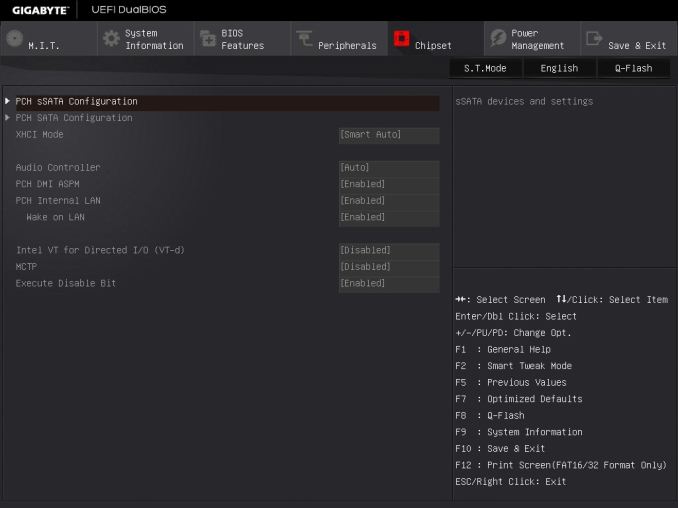 The rest of the classic BIOS allows for power management and BIOS flashing, with the Save and Exit menu giving boot override possibilities. 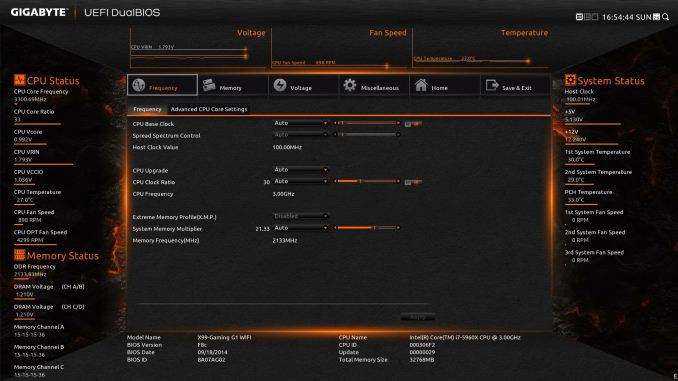 The full HD mode uses a similar sort of option arrangement in the middle of the screen with as much information as you can pack into the surrounding edges. Most BIOSes need something like this around the edge to tell the user about the system, although I might suggest that having bars underneath values such as ‘CPU VRIN’ are ultimately not necessary and could be cleaned up. The ideal BIOS is one that displays everything succinctly without wasted space but still visually effective. For example, perhaps graphing the voltage change over time in the BIOS is not particularly helpful.