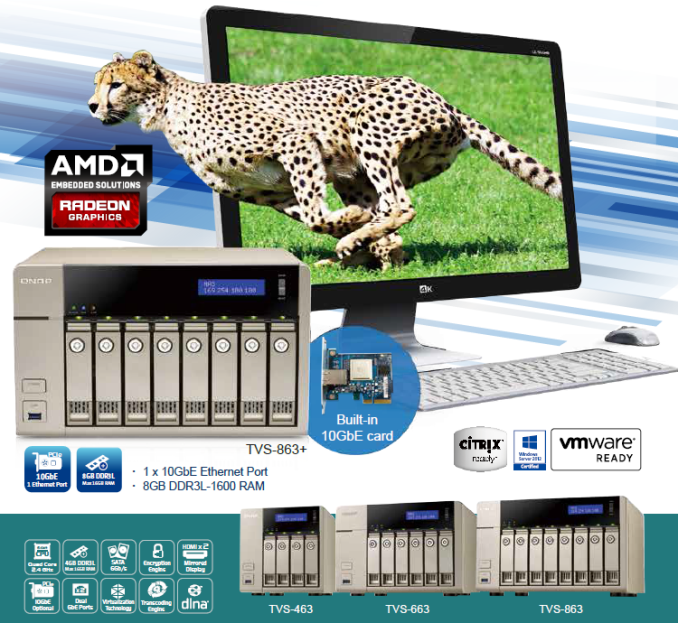 QNAP's CES suite was quite busy when we visited them last week. Considering the number of product and feature announcements that were made, it wasn't a surprise at all. There were three new major product announcements, and we will cover them in the course of two articles.

The NAS market has been dominated by Intel's x86 platform at the mid- to high-end, and ARM-based SoCs at the lower end of the market. Things are shaking up this year, with the launch of a 2x 10GbE equipped ARM-based model from Synology, the DS2015xs. On the x86 front, I had often wondered why AMD never had a product in the market. Considering the fact that the HP ProLiant microservers based on the AMD Turion platform were quite popular in the DIY market, it was surprising to find the COTS NAS vendors ignoring it completely. With the launch of the TVS-x63 lineup, QNAP has become the first vendor to bring an AMD-based x86 NAS to the market.

The TVS-x63 lineup has 4-, 6- and 8-bay models. Each of them come with either 4 or 8 GB of RAM. Higher amounts of RAM are necessary for applications where the Virtualization Station package will find use. In addition, the 8-bay model also comes with a '+' SKU. This version has a 10GBASE-T NIC pre-installed in the spare PCIe slot. The '+' version comes with either 8 or 16 GB of RAM. We will summarize the specifications of the various models in the TVS-x63 towards the end of the article. Prior to that, we will take a look at the AMD embedded G-series SoC that powers these NAS units.

QNAP specifies the CPU in the TVS-x63 models as 'AMD quad-core 2.4 GHz with Radeon Graphics' in their marketing material. At the suite, we pulled up the System Information tab, which revealed the AMD SoC to be GX-424CC. 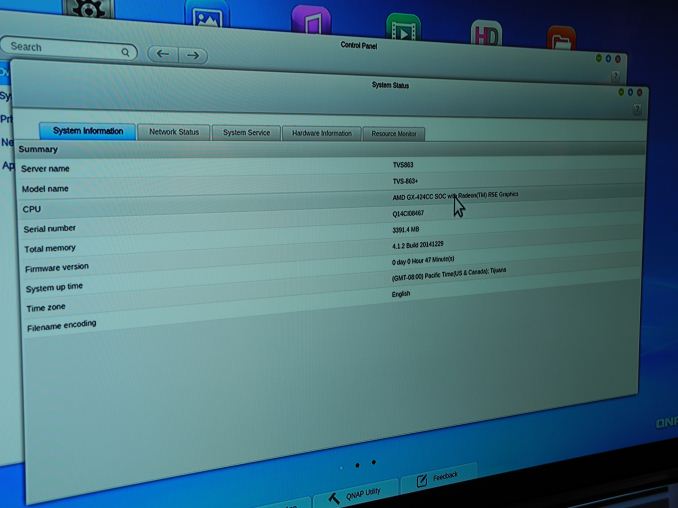 The GX-424CC is a 4C/4T Steppe Eagle configuration (based on the Puma / Jaguar+ microarchitecture). It has a TDP of 25 W. The L2 cache is 2 MB in size and the cores run at 2.4 GHz. The integrated Radeon GPU runs at 497 MHz. The unit can support DDR3 memory at 1866 MHz. Puma is the successor to Jaguar. It supports out-of-order execution. Performance-wise, it is expected to be similar to that of the Silvermont cores in the Bay Trail SoCs.

The block diagram of a typical AMD G-Series embedded SoC based on the Puma cores is produced below. It is a first-generation APU SoC design. The I/O ports mentioned at the bottom of the block diagram are important in determining how the QNAP TVS-x63 NAS units balance the I/O amongst the various necessary ports. 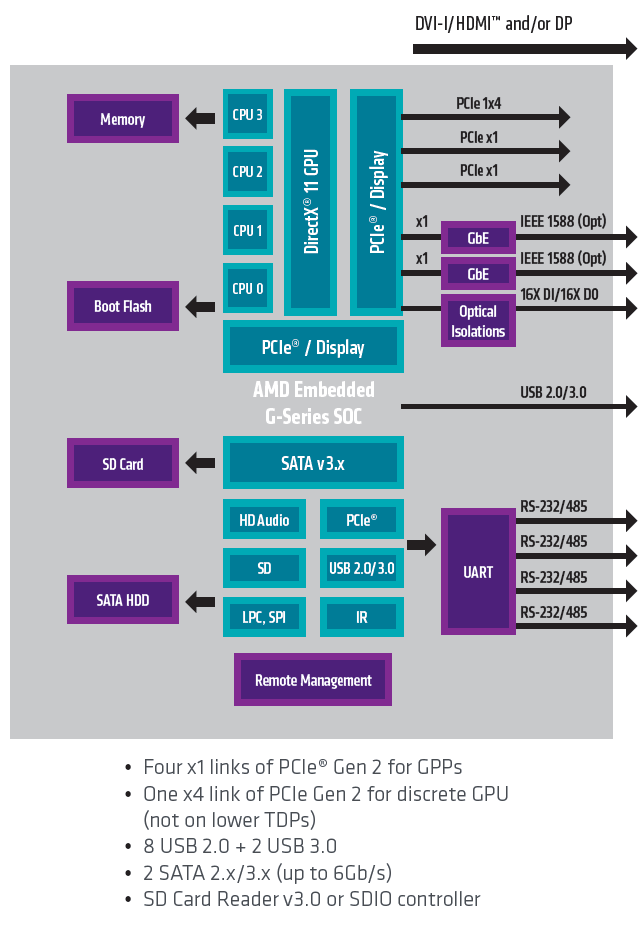 Considering the 8-bay TVS-863 for further analysis, we find the various I/Os distributed as shown below. It must be noted that the first two bays are directly connected to the SATA ports of the SoC. QNAP strongly suggests that those two ports be used for SSD caching. Typically, SoCs targeting the NAS market have native Ethernet ports, but the AMD SoC needs a PCIe bridge chip. We will have to see what effect this has in the performance department. 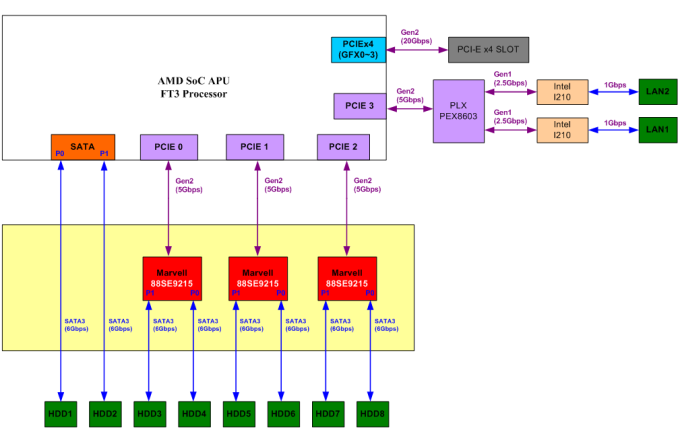 On the multimedia side of things, the TVS-x63 has two HDMI outputs. It supports true 4K output for the UI as well as QvPC side of things. However, video playback will be restricted to 1080p. The VCE engine is supported by the firmware, enabling hardware-accelerated transcoding similar to what we saw with the TS-x51 and TS-x53 Pro units that used Quick Sync.

The extract below summarizes the specifications of the various models in the TVS-x63 lineup. 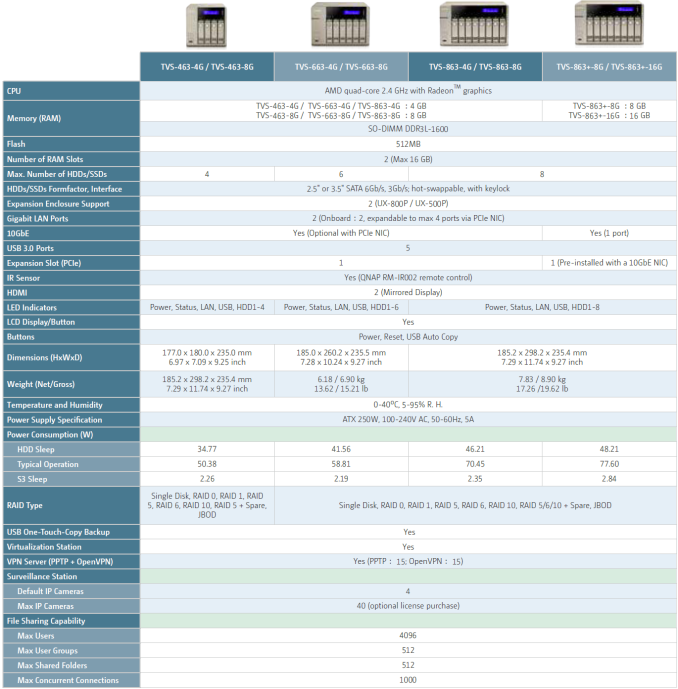 QNAP has sprung a surprise by going the AMD-route for a high performance NAS. We can probably expect the Intel-based NAS units to go down in price over the next few months. I am assuming it also provides some leverage for NAS vendors to negotiate with Intel on the pricing. On the whole, this development is a good one for consumers. In terms of pricing, the TVS-863+-8G is expected to retail for $1400. This is cheap considering the 10G port is pre-installed. The vanilla models come in at $1200 for the TVS-863-4G, $1000 for the TVS-663-4G and $800 for the TVS-463-4G.