The ASRock X99E-ITX/ac Review: Up to 36 Threads in Mini-ITX

// For readers expecting the AMD Fury X review, unfortunately Ryan has been battling a virus this week and despite his best efforts it has taken its toll. The review is near completion but with a couple of key elements still to do - please keep your eyes peeled over the next few days for the full analysis.

When things get smaller, compromises have to be made. We've seen this recently in our Core-M deep dive where building a cheaper chassis yields few benefits. In the PC space, the mini-ITX form factor has held a level of fascination for small builds, so it was only a matter of time before someone built an ITX motherboard for the most extreme platform. Some compromises were made, but ASRock delivered and we were sent the X99E-ITX/ac for review.

Intel's high end platforms offer two distinct benefits over the more mainstream counterparts. Firstly is performance, especially in multithreaded scenarios where we can use up to 8 cores with consumer processors or 18 cores with Xeons – double the threads with hyperthreading as well. The second element is connectivity, in the form of PCIe lanes where Haswell-E can offer up to 40. X99 yields other benefits as well from the chipset itself, so when a mini-ITX platform for the high end was made, a balancing act is made by virtue of the lack of space on the PCB. We've seen this mitigated before with ITX products like the Z97 Impact that use daughter boards, but the upshot of the X99E-ITX is that the connectivity element of the equation, that which is available to the user, is lower than normal for an X99 product.

This means that for GPUs on the X99E-ITX, only 16 of the 40 PCIe 3.0 lanes that the processor can provide are used (similarly, only 16 of the 28 lanes on the i7-5820K). Due to space onboard, only two memory channels are used for two slots of DDR4. The SATA connections from the chipset are also reduced from 10 to 6. It is also worth mentioning that the socket size is not the standard ILM measurements for LGA2011-3 - the narrow ILM standard, more commonly seen in servers, is used instead. ASRock gets around this final issue by sourcing and including an appropriate cooler from Dynatron (a well-known CPU cooler manufacturer in the server space) which is in the package when you buy the motherboard. There is also an included water cooling bracket which covers the brands that use a magnetic latch system.

On the plus side for storage we get a SATA Express port as well as an M.2 PCIe 3.0 x4 which uses some of the spare CPU PCIe lanes. The board is also equipped with dual Intel network ports and dual band 2T2R 802.11ac WiFi to enhance network connections, and to top it off is a pair of USB 3.1 Type-A ports provided by an ASMedia controller using two PCH lanes.

Ultimately a lot of users are going to judge this product by virtue of what it doesn't have. For some the high end platform means high end gaming, or fast memory throughput by not limiting the potential. But that isn't the goal here. High density CPU based compute systems, especially for those that can run headless and networked systems, pride themselves on this sort of size. The X99E-ITX fits that niche, and its success (or failure) will be closely monitored by the other motherboard manufacturers.

A big part of the review today will be testing just how much limiting the memory to dual channel hurts Haswell-E, and ultimately if this is cause for concern.

The mini-ITX standard measures 17cm x 17cm, and it would seem that almost every millimeter of this motherboard is filled in. Consumers migrating from older platforms will at first notice the narrow ILM socket, which is right up against the DRAM slots to the top and the M.2 slot at the bottom. If you’re familiar with X99 but not with narrow ILM, take a look at the top latch of the socket, and it is worth seeing the difference in the latch arm – we get a front flat end, rather than the typical hook. 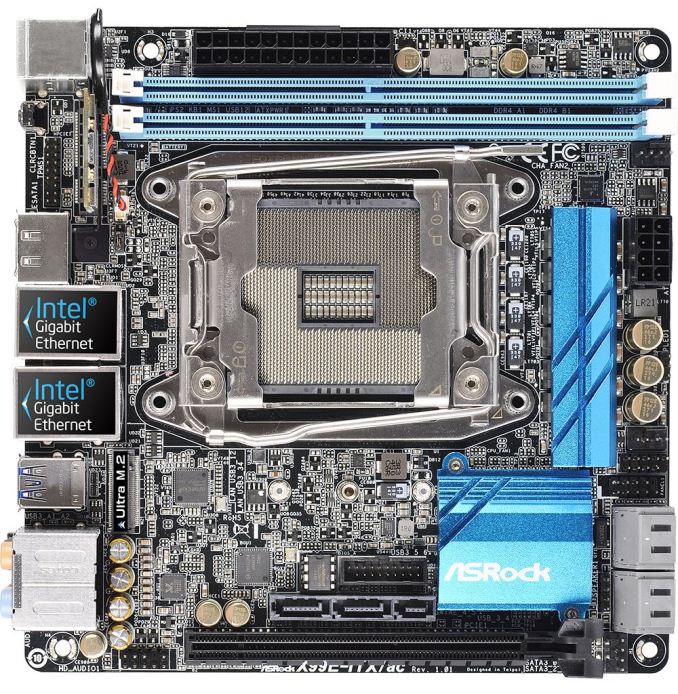 The socket has access to two fan headers on the right hand side of the motherboard – one just below the DRAM slots and another above the SATA ports on the right hand side. There is a third below the SATA ports, although it might be worth investing in a right angled connector if a large GPU is in place.  Between the fan headers and the socket is our power delivery, which features a six-phase design using Cooper-Bussmann chokes, similar to a number of server platforms. 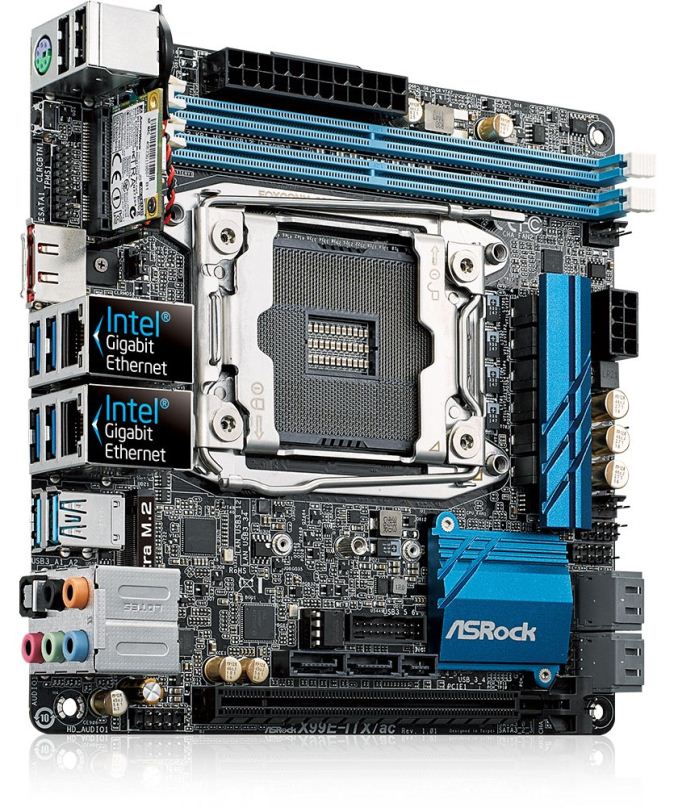 The two DRAM slots stick out like a sore thumb, and in order to accommodate everything both the socket and the DRAM are at right angles compared to the normal arrangement we see on consumer products. Even with this arrangement ASRock was able to implement one of my pertinent requirements for a good ITX build – having the power connections around the edge of the motherboard. At the top is the 24-pin ATX power, and to the right is the 8-pin EPS 12V.

On the right hand side along with our power delivery and fan headers is the front panel header, a USB 2.0 header and four of our SATA ports. There are two more on the motherboard which are both bundled as part of a SATA Express port just above the PCIe slot in the middle. Given the prevalence at which SATAe has not entered the market, I am glad that an M.2 PCIe 3.0 x4 slot is included as well between the CPU and the PCIe slot. This makes up for some of the CPU lanes not being used. 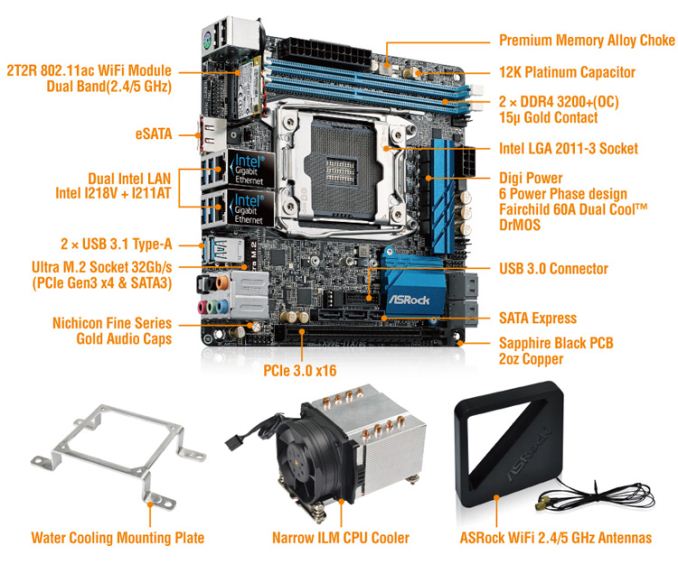 The audio header is located in the bottom left of the motherboard, which might cause issues depending on what sort of graphics card is used, but the audio is powered by a Realtek ALC1150 for good measure. At the top of the board is our WiFi card, using a mini-PCIe slot just behind the rear panel IO and complimenting the dual Intel network ports on the rear panel.

The rear panel has two USB 2.0 ports, a combination PS/2 port, a reset CMOS button, an eSATA port, four USB 3.0 ports from the chipset, and the two aforementioned Intel network ports (I218-V and I211-AT). Another premium feature on this motherboard is the USB 3.1 connectivity where we get two Type-A ports due to the onboard ASMedia controller.