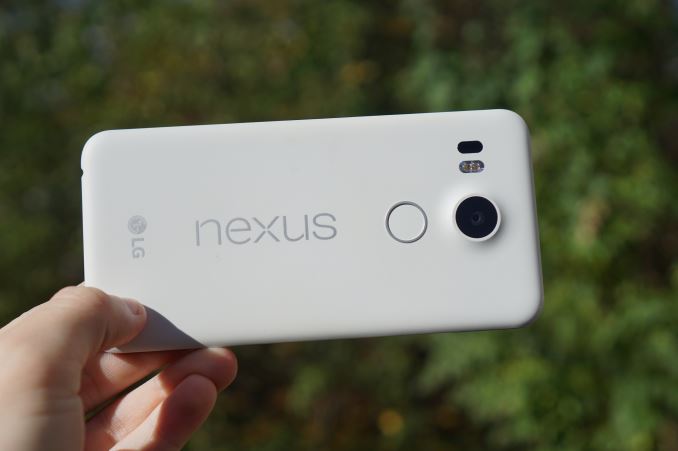 Google's first hardware collaboration with LG brought us the Nexus 4. Like the Nexus 7, the Nexus 4 followed a philosophy of bringing as much power and quality as possible to a reasonably affordable price point. The Nexus 4 definitely wasn't a perfect phone, but it was certainly good relative to its price, and it showed that a phone can still be good even if it doesn't cost $600. About one year later Google and LG collaborated again to bring us the Nexus 5, a device which I and many other users fondly remember as an affordable phone that actually brought many of the specifications you would expect to see in a device that was priced significantly higher.

While I'm sure many hoped that 2014 would bring the next iteration of an LG Nexus device, it wasn't meant to be. Instead we got the Nexus 6 made by Motorola, which didn't really follow the pricing philosophy of the LG Nexus devices, and wasn't very competitive with devices like the Galaxy Note 4 despite its equivalent cost. At that point the future of affordable Nexus devices was unclear, and I wasn't even sure if we'd see a true successor to the Nexus 5. Fortunately, this year is the year that LG returns to bring us the next iteration of their Nexus phones, with the new device appropriately being named the Nexus 5X. With two years of hardware advancements between releases the expectations are high for this new phone, and you can check out its specs below.

Based on the specs you see on paper the Nexus 5X appears to represent an improvement over the Nexus 5 in every respect. Of course, it would be shocking if the successor to a two year old device didn't improve on it in every way, but we've actually seen some flagship Android phones regressing this year so such a scenario wouldn't be far removed from reality. The SoC moves from Snapdragon 800 to 808, but both the RAM and the internal storage remain the same. The display is slightly bigger, and with that comes a larger chassis and battery. The cameras receive significant upgrades, and I'll be talking about that in much more depth later in the review. Finally, both LTE and WiFi speeds receive a boost, and the starting price does jump a bit to $379 from the Nexus 5's $349.

One can't really discuss the design of the Nexus 5X without comparing it to the Nexus 5. Both devices are made by LG, and when looking at the two phones one can clearly see that they use similar materials and share visual characteristics. However, the body of the Nexus 5X definitely diverges from the Nexus 5 in a number of ways, and I think the changes ultimately make for a more refined and cohesive design. 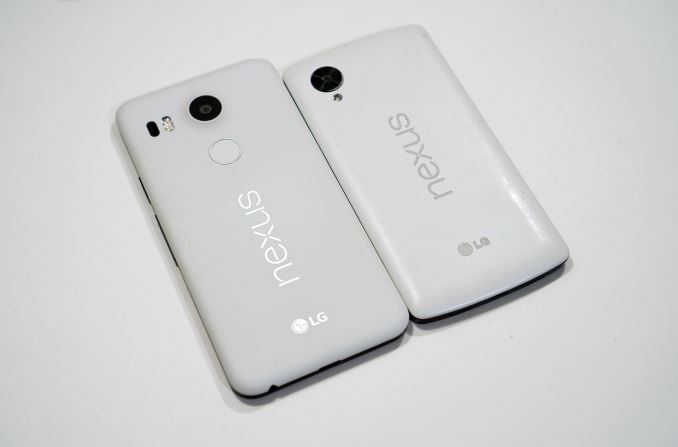 From the back it's made even clearer how the design of the Nexus 5X has matured from the Nexus 5. Google has moved the camera to the center of the back, much like its position on the Nexus 6. Beneath it is a fingerprint scanner, which Google brands as Nexus Imprint, and it's something I'll be discussing later in the review. To the left of the camera is the IR laser which handles the camera's auto-focus. The camera itself definitely has a significant hump, with it being about the same thickness as the hump on the Samsung Galaxy S6. We can talk about how this means the device isn't perfectly flat on a table and won't slide through a slot with a width of exactly 7.9mm, but if the end result is a much better camera then I'm honestly fine with the trade off, even if it might be viewed as somewhat unsightly.

The most striking difference is actually a fairly subtle one, which is the curvature of the corners and edges of the phone. On the Nexus 5 the top and bottom edges were actually curved, and they changed to the flat left and right edges at fairly sharp corners. On the Nexus 5X all the edges of the phone are flat, and there's a much more consistent curve at the corners as the edges are perpendicular rather than meeting at an angle greater than 90 degrees.

Like the Nexus 5, the 5X has a noticeable seam between the back cover and the front of the phone. This is more noticeable on the dual-tone quartz and ice colored versions, because the color abruptly changes to black. Like the corners of the phone, the back cover now curves toward the edges of the chassis, rather than changing abruptly with very little curvature like the Nexus 5 did. One could argue that all of these changes actually makes the device less-than-unique, as the more angular design of the Nexus 5 allowed it to stand out. While this is definitely true to an extent, the phone is still clearly a Nexus device, and you wouldn't confuse it with an iPhone or a Samsung Phone, or really even an LG-branded phone.

A small detail that's worth mentioning is a change in the volume and power buttons. Unlike the Nexus 5 they're now all on the right side. When I first got a device that used this arrangement it definitely took time to get used to, but now I don't really have any qualms with it. What is worth noting is that the power button doesn't have the etched texture that the one on the Nexus 6 did, but Google has spaced the buttons out an appropriate amount to ensure that you can tell whether you're touching the volume rocker or the power button. The material of the buttons has been changed though. The Nexus 5 used ceramic buttons that were much sharper and more slippery than the rest of the chassis, but on the 5X the buttons are made of the same plastic as the sides of the phone. I personally thought the ceramic buttons actually just made it harder to feel which side of the volume rocker you were on, and I have no complaints about the change on the 5X. 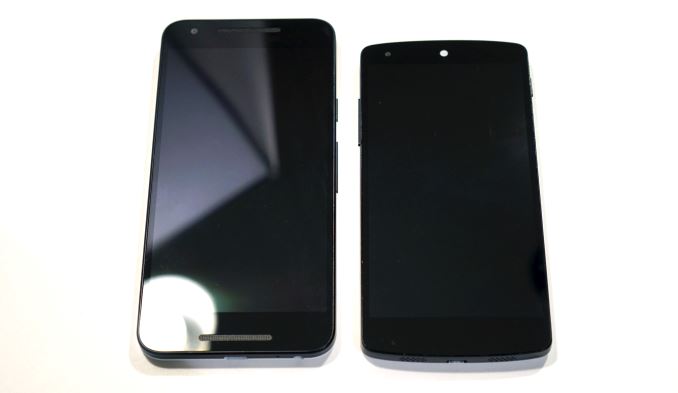 The front of the device can be a bit deceiving. On the top you have a speaker grille, the front-facing camera to the left of it, and an ambient light sensor. Below the display you have another speaker grille. However, the Nexus 5X does not have stereo speakers, and the top portion simply acts as the earpiece, while the bottom is the speaker used when playing general audio. The speaker itself is also pretty poor quality, with pretty obvious distortion and a generally muffled output. I was really surprised to find that it sounds worse than an iPhone 5s even when the 5s is at a higher volume, especially because I hardly hold the iPhone's downward-facing mono speaker in high regard. The fact that the speaker is front-facing definitely prevents it from being covered when you hold the phone, but my admittedly highly subjective evaluation is that the speaker quality hasn't really improved from the Nexus 5.

The last thing I wanted to comment on is the overall size of the device. Google has certainly slimmed down the body, but the larger display necessitates a wider and taller chassis. While the increases don't seem like much, they're enough to put the Nexus 5X a bit outside my comfort range. It's worth noting that I have a great amount of trouble handing large phones, while for many users the increase in size going from the Nexus 5 to the 5X may be no problem at all. For me specifically, I definitely find the Nexus 5 easier to handle. That being said, if I could transplant the Nexus 5X's internals into the Nexus 5 I wouldn't do so, because while the 5X may be a bit too big for my tastes, the ergonomics are greatly improved and that definitely contributes to a better overall feel in the hand.

For $379, the Nexus 5X gives you a solid plastic build without any flex, and that's all I really expected and wanted from a successor to the Nexus 5. For users who want a more premium-feeling device the Nexus 6P is certainly an option, but you'll obviously end up paying more for it, and I think the price has always been the most attractive aspect of the LG Nexus smartphones.