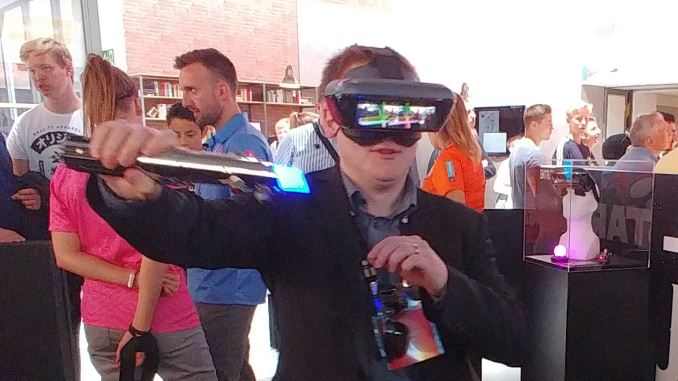 “The chosen one you are, with great promise I see.” Now that Disney owns the Star Wars franchise, the expansion of the universe is seemingly never ending. More films, more toys, and now more technology. We’re still a few years away from getting our own lightsabers [citation needed], but until then Disney has partnered with Lenovo to design a Star Wars experience using smartphones and augmented reality.

Lenovo is creating the hardware: a light beacon, a tracking sensor, a lightsaber controller, and the augmented reality headset designed for smartphones. The approach for Lenovo’s AR is different to how Samsung and others are approaching smartphone VR, or how Microsoft is implementing Hololens: by implementing a pre-approved smartphone into the headset, the hardware uses a four-inch diagonal portion of the screen to project an image that rebounds onto prisms and into the user’s eyes. The effect is that the user can still see ahead of them, but also images and details on the screens – limited mostly by the pixel density of the smartphone display. 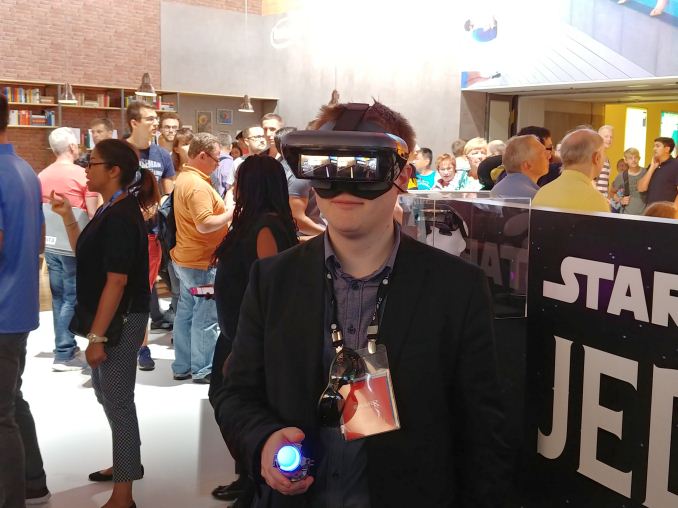 Lenovo already has the hardware up for pre-order in the US ($199) and the EU (249-299 EUR), and is running a curated system of Android and iOS smartphones. This means that the smartphones have to be on Lenovo’s pre-approved list, which I suspect means that the limitation will be enforced at the Play Store level (I didn’t ask about side loading). But the headset is designed for variable sized devices. 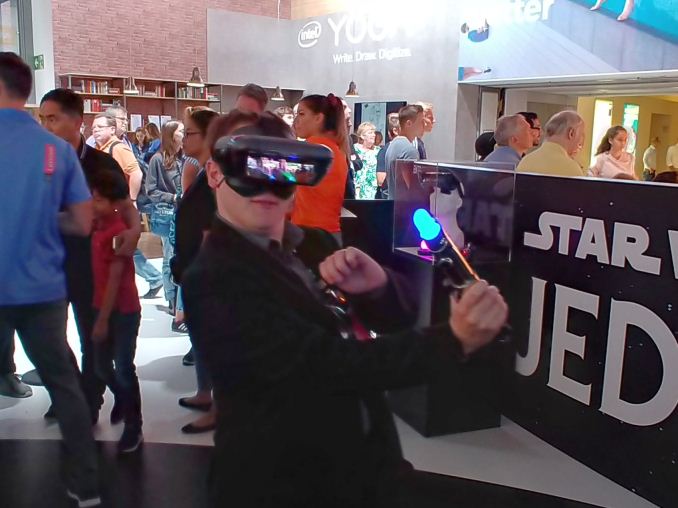 In the two minute demo I participated in, I put on the headset and was given a lightsaber into a 10ft diameter circle, and fought Kylo Ren with my blue beam of painful light. Despite attempting harakiri in the first five seconds (to no effect), it was surprising how clear the image was without any IPD adjustment. The field of view with the headset is only 60 degrees horizontal and 30 degrees vertical, which is bigger than the Hololens and other AR headsets I have tried, but it still remains one of the biggest downsides to AR. In the demo, I had to move around and wait to counter-attack: after deflecting a blow or six from Kylo, I was given a time-slow opportunity to strike back. When waiting for him to attack, if I rushed to attack nothing seemed to happen. In typical boss-fight fashion, three successful block/hit combinations rendered me the victor – I didn’t see a health bar but this was a demo designed to encourage the user to have a positive experience.

One thing I did notice is that most of what I saw was not particularly elaborate graphically: 2D menus and a reasonable polygon model. Without the need to render the background, relying on what the user is in front of to do this job (Lenovo had it in a specific dark corner for ease of use) this is probably a walk in the park for the hardware in the headset. The lightsaber connects directly to the phone via Bluetooth, which I thought might be a little slow, but I didn’t feel any lag. The lightsaber was calibrated a bit incorrectly, but only by a few degrees. I asked about different lightsabers, such as Darth Maul’s variant, and was told that it there are possibilities in the future for different hardware, although based on what I saw it was unclear if they would implement a Wii-mote type of system with a single controller with a different skin attached. The limit at the time was that the physical lightsaber only emits a blue light for the sensor for now; it does go red, but only when there’s a low battery. Think about that next time you watch Star Wars: red saber means low batteries.

The possibilities for the AR headset could feasibly be endless. The agreement at this time is between Lenovo and Disney Interactive, so there is plenty of Disney IP that could feature in the future. Disney also likes to keep experiences on its platform locked down, so I wonder what the possibilities are for Lenovo to work with other developers and IP down the road. I was told by my Lenovo guide that it is all still very much a development in progress, with the hardware basically done and the software part going to ramp up. The current headset is given the name ‘Mirage’, and most smartphones should offer 3-4 hours of gameplay per charge.

Pre-orders are being taken now, shipments expecting to start in mid-November. US price is listed as $199.99 (without tax) and EU pricing at 299.99 EUR (with tax). 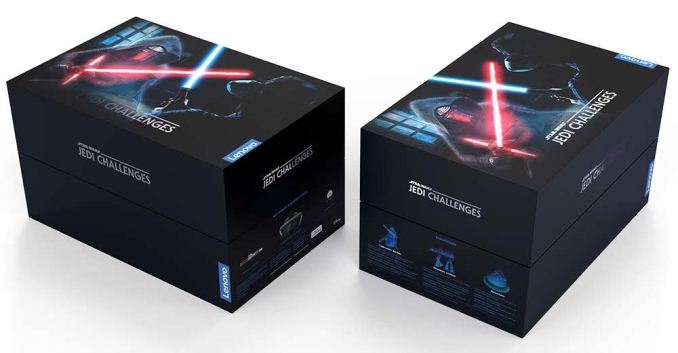