SD (Secure Digital) cards were introduced in 1999, as an update to the existing MultiMediaCards (MMCs). It gained traction even in areas where CompactFlash had been preferred, thanks to its small size. Its popularity is evident by the fact that it has spawned two follow-ups in the same form factor - starting with the SDSC in 1999 for capacities between 1MB and 2GB, we got SD High Capacity (SDHC) in 2006 (up to 32GB) and SD eXtended Capacity (SDXC) in 2009 (up to 2TB). The cards also come in various sizes - standard, mini, and micro. In addition to the capacity aspect, the performance levels have also gone up. While UHS-I had an upper theoretical limit of around 100 MBps, UHS-II added more pins and increased the theoretical limit to around 312 MBps. 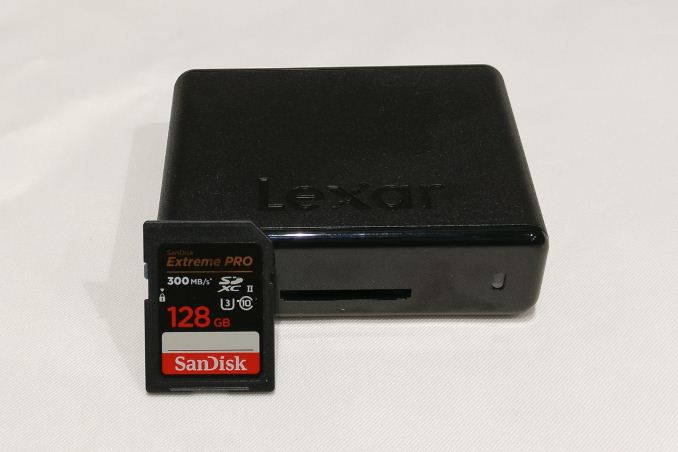 The SanDisk Extreme PRO SDXC UHS-II family has three different capacity points - 32GB, 64GB, and 128GB. In this section, we take a look at the performance of the 128GB version.

SanDisk claims speeds of up to 300 MBps, but real-world speeds are bound to be lower. In fact, writes can sometimes be much slower. For most applications, that really doesn't matter as long as the card is capable of sustaining the maximum possible rate at which the camera it is used in dumps data. We use fio workloads to emulate typical camera recording conditions. We run the workload on a fresh card, and also after simulating extended usage. Instantaneous bandwidth numbers are graphed. This gives an idea of performance consistency (whether there is appreciable degradation in performance as the amount of pre-existing data increases and / or the card is subject to wear and tear in terms of amount and type of NAND writes). Further justification and details of the testing parameters are available here. 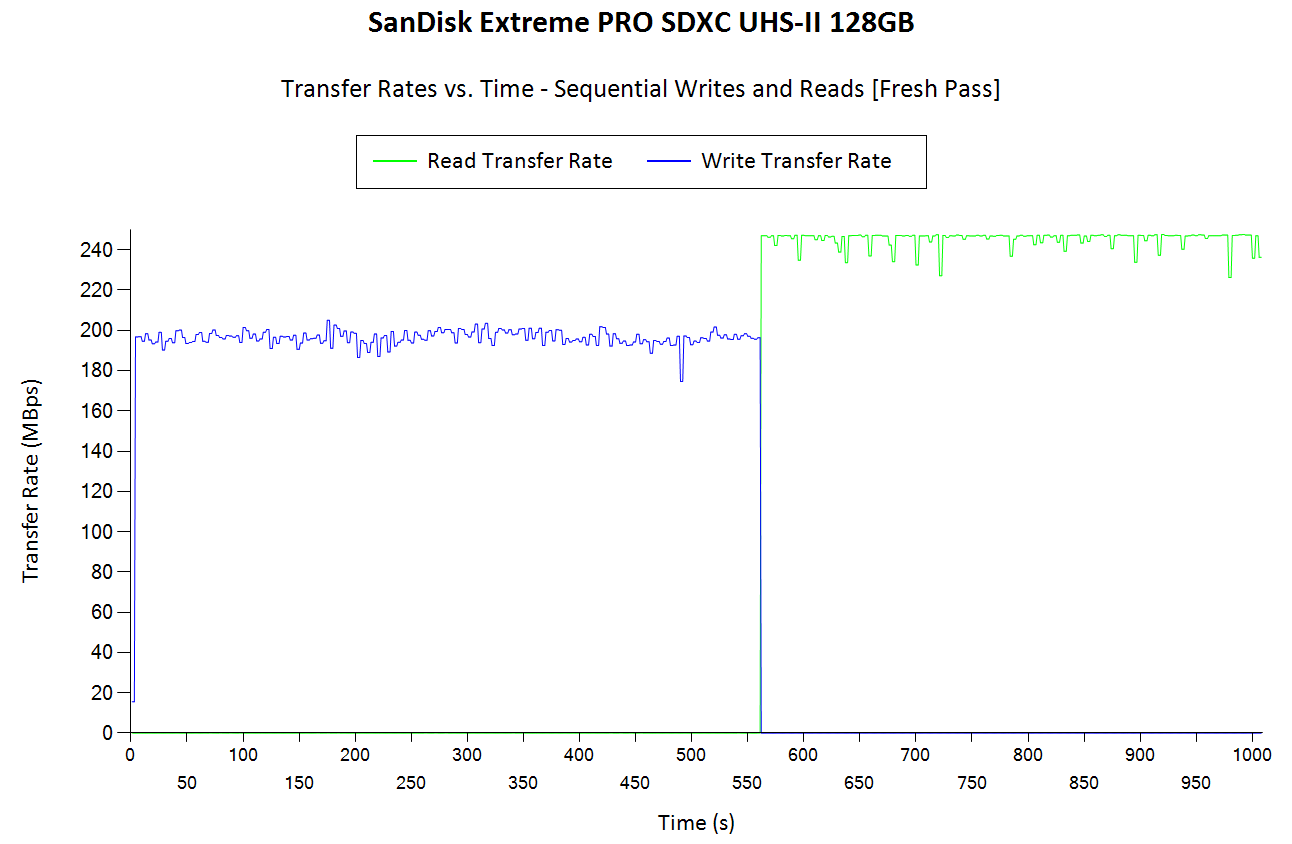 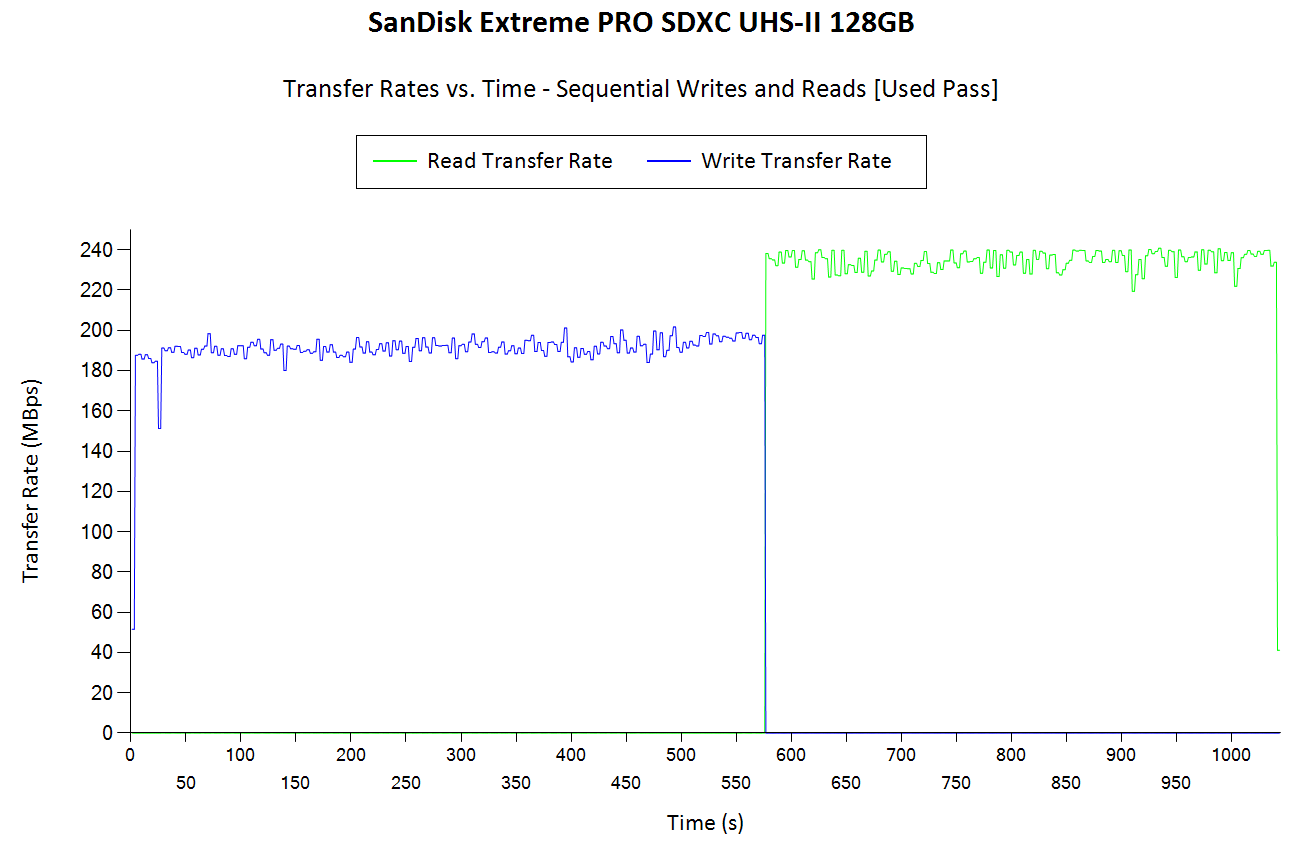 The SanDisk Extreme PRO SDXC UHS-II 128GB card manages to hold on to its performance numbers even after extended usage. In the case of an old card, the sustained write speed does take an occassional dip (going from the average 180 MBps to around 150 MBps, but, that is pretty insignificant compared to what we see with the other cards). The read speeds are largely unaffected by the extended usage aspect.

Compared to other UHS-II cards that we have evaluated before, the ADATA Premier ONE comes out with better sustained sequential writes and reads (typical of the digital camera / camcorder recording and content ingestion workloads). Even in the accelerated ageing case, the ADATA card manages to be on top. Under these circumstances, the choice comes down to pricing to see if the SanDisk Extreme PRO can deliver better value for money. We will be seeing that in the last section.

The AnandTech DAS Suite involves transferring large amounts of photos and videos to and from the storage device using robocopy. This is followed by selected workloads from PCMark 8's storage benchmark in order to evaluate scenarios such as importing media files directly into multimedia editing programs such as Adobe Photoshop. Details of these tests from the perspective of memory cards are available here.

In this subsection, we deal with performance consistency while processing the robocopy segment. The graph below shows the read and write transfer rates to the memory card while the robocopy processes took place in the background. The data for writing to the card resides in a RAM drive in the testbed. The first three sets of writes and reads correspond to the photos suite. A small gap (for the transfer of the videos suite from the primary drive to the RAM drive) is followed by three sets for the next data set. Another small RAM-drive transfer gap is followed by three sets for the Blu-ray folder. The corresponding graphs for similar cards that we have evaluated before is available via the drop-down selection. 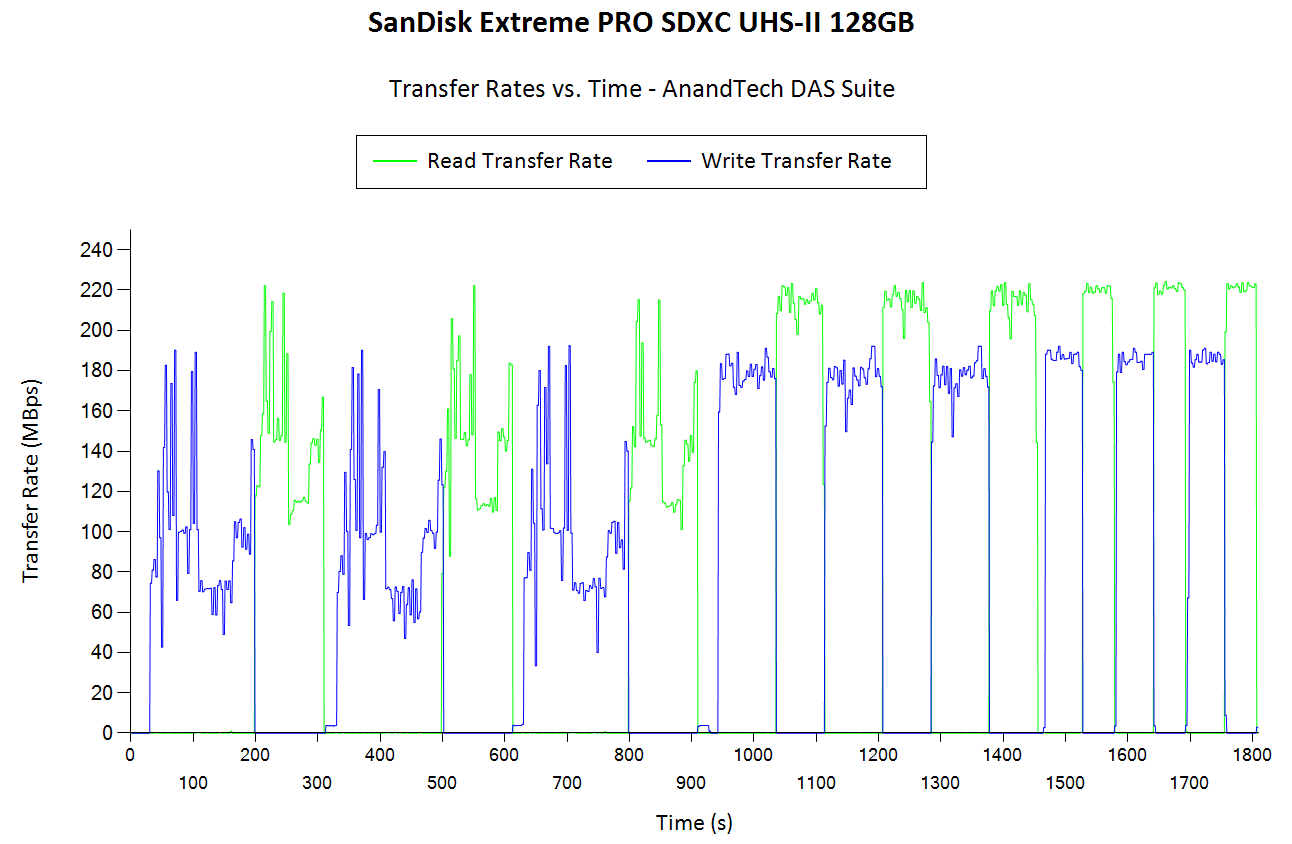 In these tests, we find that the SanDisk Extreme PRO is well optimized for general data traffic compared to the ADATA Premier ONE. The full test is completed within 30 minutes compared to around 40 for the ADATA card. For general computing systems (smartphones and other embedded systems), the SanDisk Extreme PRO might turn out to be a better choice.

The average transfer rates for each workload from the previous section is graphed below. Readers can get a quantitative number to compare the SanDisk Extreme PRO SDXC UHS II 128GB SD card against the ones that we have evaluated before. Here, the main competition is between the ADATA Premier ONE and the SanDisk Extreme PRO. The SanDisk card wins in the mixed-sized write-intensive workload (photos section) comfortably, while giving close competition in the other scenarios. 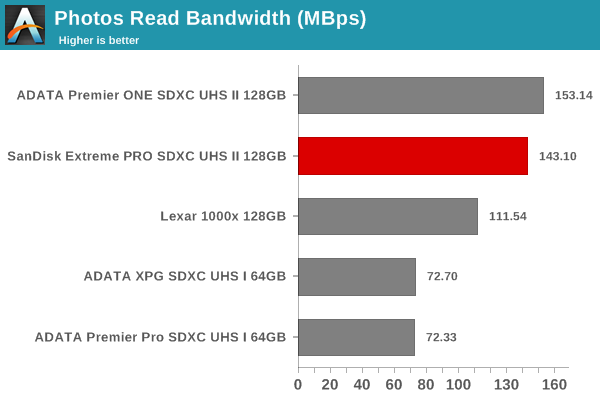 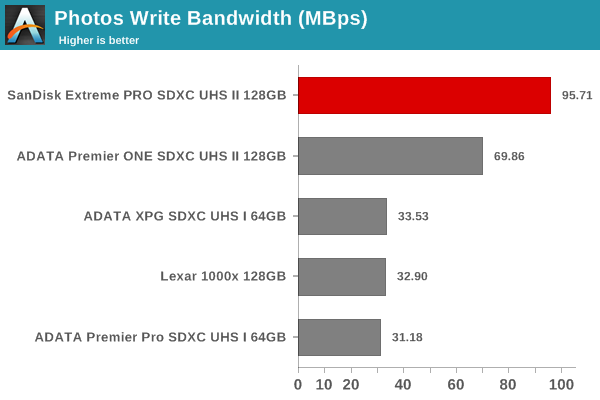 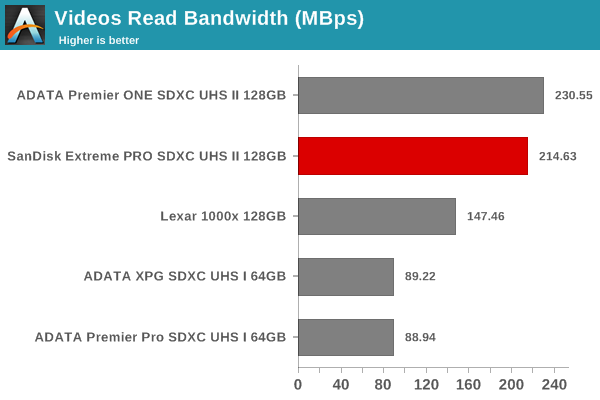 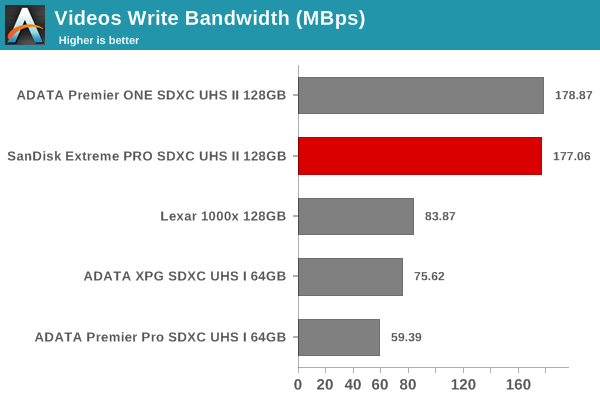 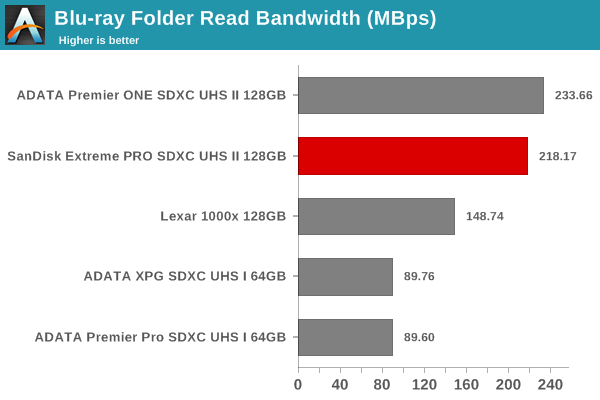 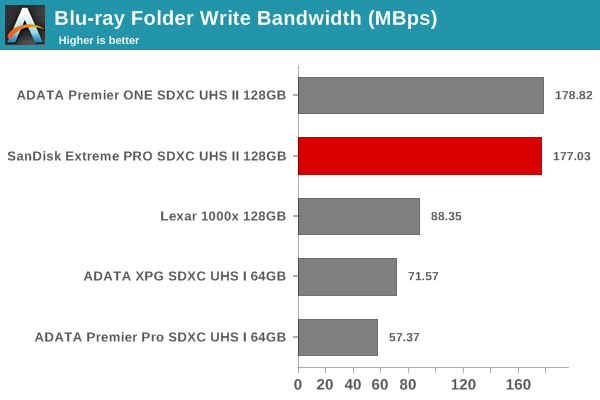 We also look at the PCMark 8 storage bench numbers in the graphs below. Note that the bandwidth number reported in the results don't involve idle time compression. Results might appear low, but that is part of the workload characteristic. Note that the same testbed is being used for all memory cards. Therefore, comparing the numbers for each trace should be possible across different cards. In this case, the optimization of the SD controller firmware for mixed-size / generic workloads is evident, as the SanDisk card comes out on top in most of the tests. 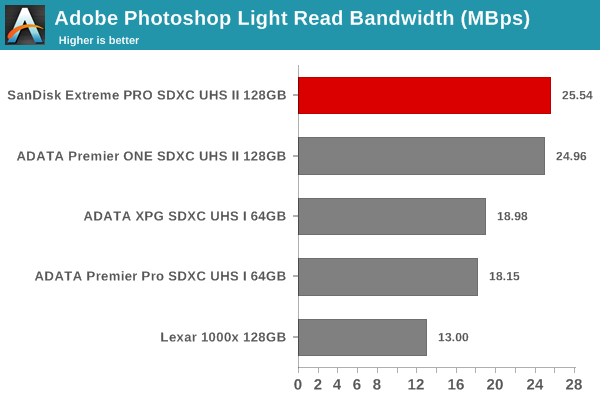 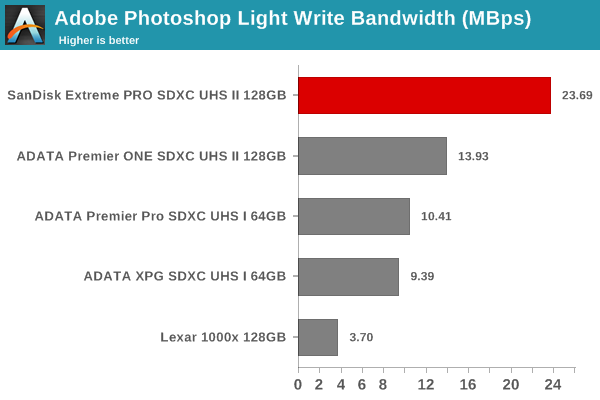 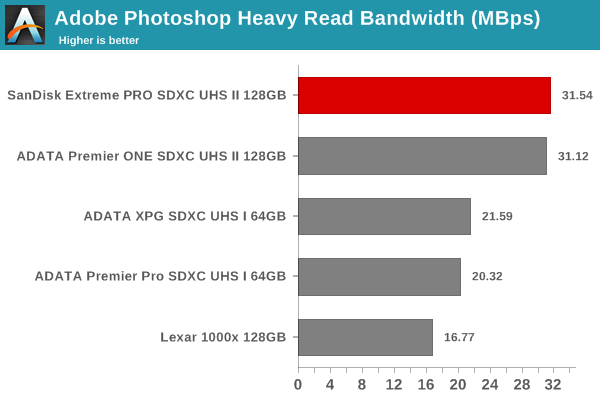 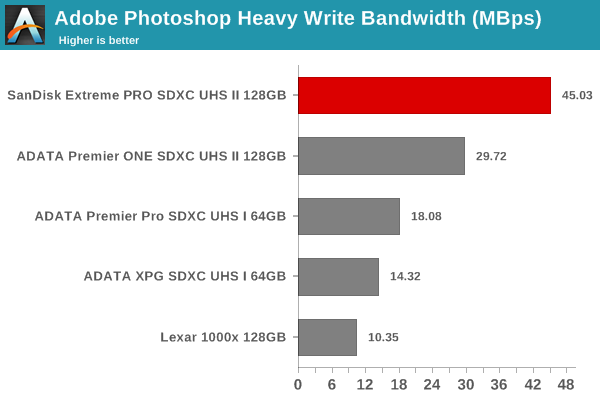 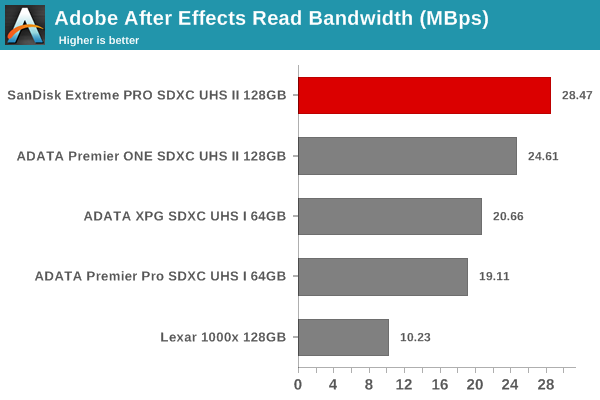 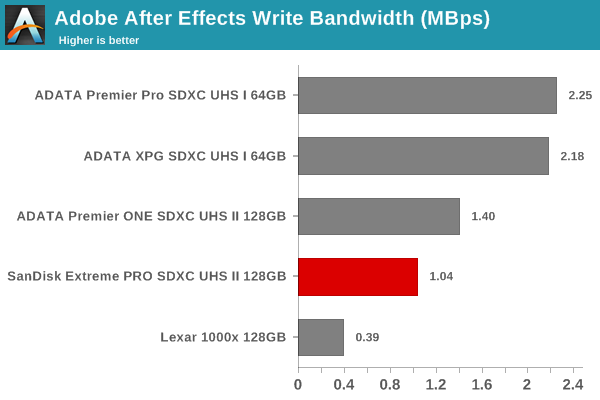 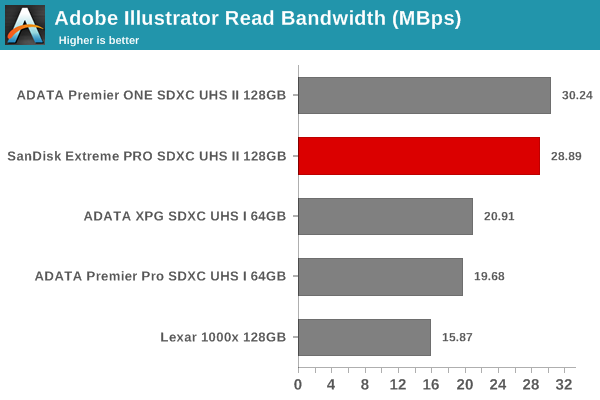 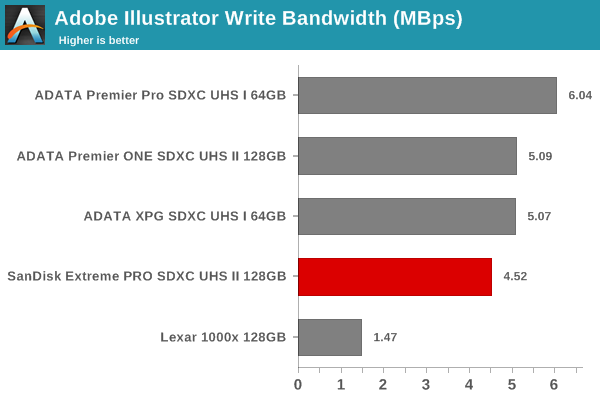 The traditional memory card use-case is to delete the files on it after the import process is completed. Some prefer to format the card either using the PC, or, through the options available in the camera menu. The first option is not a great one, given that flash-based storage devices run into bandwidth issues if garbage collection (processes such as TRIM) is not run regularly. Different memory cards have different ways to bring them to a fresh state.Based on our experience, SD cards have to be formatted using the SD Formatter tool from the SD Association (after all the partitions are removed using the 'clean' command in diskpart).

In order to test out the effectiveness of the performance restoration process, we run the default sequential workloads in CrystalDiskMark before and after the formatting. Note that this is at the end of all our benchmark runs, and the card is in a used state at the beginning of the process. The corresponding screenshots for similar cards that we have evaluated before is available via the drop-down selection.

Given that we didn't have much performance degradation in our sustained workloads test, it is not surprising that the CrystalDiskMark numbers for the used and refreshed cases are close to each other. Users don't need to worry too much about regularly formatting the Extreme PRO SDXC UHS-II card in order to maintain consistent performance.