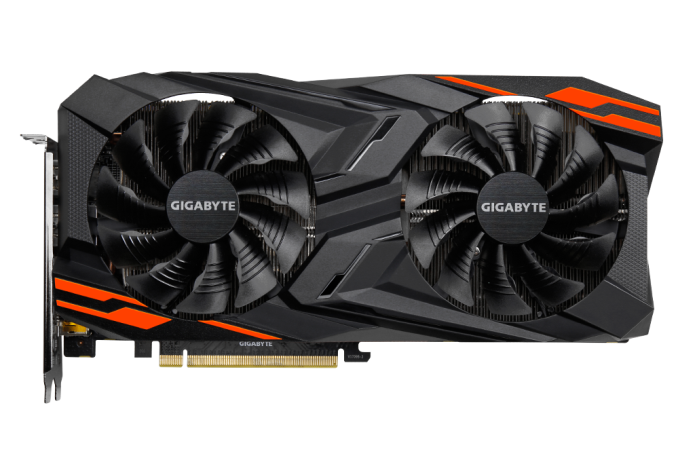 The rest of the Windforce 2X design is fairly standard for Gigabyte’s high-end models. Underneath the two 100mm alternate spinning fans, the aluminum heatsink’s five copper heatpipes make direct contact with the GPU, and presumably the HBM2 as well. On the rear, the metal backplate features a copper plate behind the GPU and a copper heatpipe, features that are not typically present in Gigabyte’s budget models. Altogether, the heatsink with rear copper plate and heatpipe complex is an interesting design choice to complement the dual fan design, and ideally would mitigate the lesser cooling potential versus three fans.

The card also features a 3x HDMI & 3x DisplayPort output configuration, leaving it suitable for VR and 6-display setups. While the card has 2x 8pin PCIe power connectors, TBP was not disclosed, and the specifications simply recommend a 750W PSU.

While Gigabyte’s announcement states that they have released the product, the RX Vega 64 Gaming OC is yet to be found on sale. Gigabyte did comment that a custom Radeon RX Vega 56 featuring the same Windforce 2X cooler will be released in early December, presumably in time for the holiday season.