Today Marvell announces the introduction of their new 802.11ax wireless portfolio which promises to be the company's first product line laying the groundwork for advancing the new wireless standard.

We've first written about 802.11ax products well over a year ago with Quantenna's first announcements followed by Qualcomm's first introductions earlier this year. As explained in the earlier articles, 802.11ax's focus isn't on advancing peak throughput speeds (Which will be more a focus of 802.11ad compliant solutions), but improving spectral efficiency in the 2.4 and 5GHz bands. As typical wireless networks are expected to ever increase in the number of connected devices, the standardisation of features such as 1024-QAM, MIMO and OFDMA. are crucial to improving network capacity. 802.11ac  Wave 2 devices started this trend with the introduction of MU-MIMO capable devices, (which will be fully capable of taking advantage of 802.11ax deployments), but 802.11ax makes this mandatory and also expands the features into the 2.4GHz band. 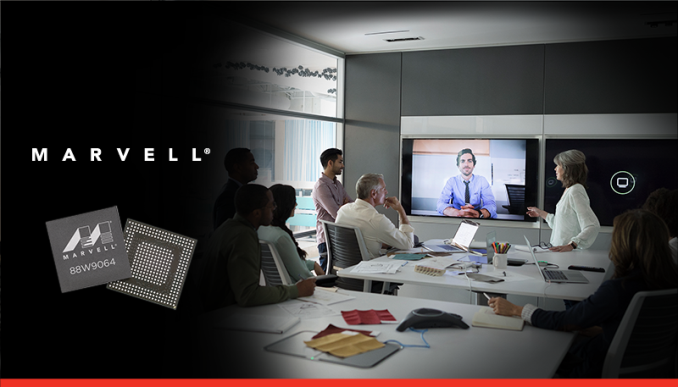 Marvell introduces three products today (88W9068, 88W9064, 88W9064S), each catering different market segments from the enterprise down to use-case scenarios such as OTT set-top-boxes. All three products fully support OFDMA and MU-MIMO on both down- and up-link, as well as 1024-QAM. Where they differentiate is in the spatial stream and frequency band capabilities as well as Bluetooth 5 integration.

The 88W9068 is optimised for premium enterprise and high-end retail access points and supports 8x8 8 spatial streams in the 5GHz band with no support for the 2.4GHz band nor support for Bluetooth.

The 88W9064 targets more mainstream enterprise and retail devices and supports 4x4 4 spatial streams in both the 5GHz and 2.4GHz bands and comes with Bluetooth 5 integration.

Finally the 88W9064S is the lower-end solution supporting only 2x4 2 spatial streams in 5 and 2.4GHz bands with Bluetooth 5 integration. This solution is targeted at devices such as OTT set-top-boxes.

At moment of writing we don't have more information in regards to the SoC side specifications such as CPU configuration or network accelerator capabilities, but already it seems the Marvell solutions target different segments as even the highest end solution doesn't compete with the 8x8 5GHz + 4x4 2.4GHz solutions of Qualcomm and Quantenna and as such doesn't make it as attractive in the high-end consumer router market.

Update: Marvell reached out to clarify that the solutions are in fact not SoCs but rather discrete MAC/Baseband/RF solutions that can be mixed with external CPU SoCs. This gives the vendors flexibility to mix different RF solutions. An example would be to mix an 88W9068 with an 88W9064 plus an external quad-core A72 CPU. Such a solution would give 8x8 5GHz and 4x4 5 and 2.4GHz and enable tri-band capability, a feature that's becoming more sought after in consumer routers.

Marvell's 802.11ax solutions have been sampling to lead customers since early 2017 and hopefully we should be seeing product announcements over the coming months at CES and MWC.