The Phantom Gaming series, debuted recently, has been an interesting development from ASRock. Going for a more sleek look, the range offers additional functionality above the norm different to its other gaming brands. The first X399 motherboard with the PG naming scheme is the new X399 Phantom Gaming 6, with support for both AMD's first and second generation Ryzen Threadripper HEDT processors. 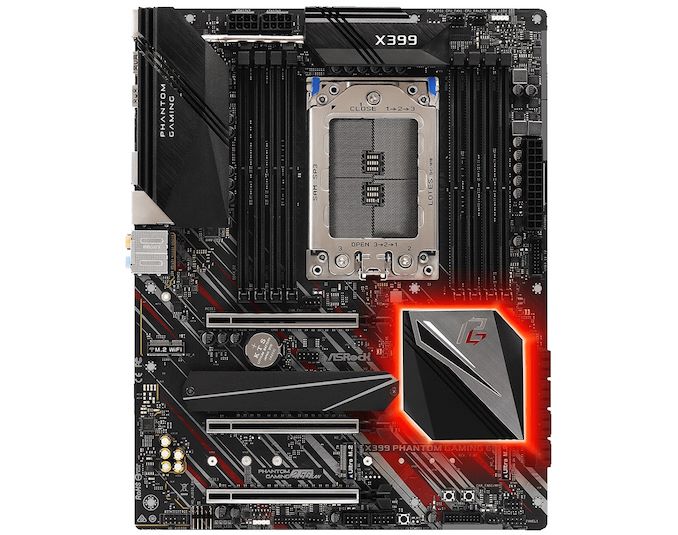 Earlier on in the year, ASRock replaced its Fatal1ty branded boards with the new and more visually neutral aesthetic. The new X399 Phantom Gaming 6 is one of the new iteration with silver and black heatsinks. The chipset heatsink and the PCB has red accents too. The matte black power delivery heatsink covers the majority of the rear panel and stretches with a heat pipe across the entirety of the power delivery, going by dual 8-pin 12 V ATX CPU power inputs. There are also a further two RGB headers and a single addressable RGB header with support for ASRock's Polychrome RGB. Other headers include five 4-pin fan headers with support for PWM, two USB 2.0 and two USB 3.1 Gen1 headers, as well as including a single Key E PCIe slot for support to allow users to install a compatible Wi-Fi adapter.

For PCIe, three full-length PCIe 3.0 slots allow for up to three-way SLI and CrossFire setups to be installed. The ASRock X399 Phantom Gaming 6 has eight SATA ports fed directly from the chipset and has support for RAID 0, 1 and 10 arrays. Also implemented are three M.2 slots, one of which comes with an M.2 heatshield. On the memory front, the new ASRock X399 Phantom Gaming 6 has eight DDR4 slots with quad channel support for up to DDR4-3400 and a total capacity up to 128 GB. There is also a slot for M.2 Wi-Fi. 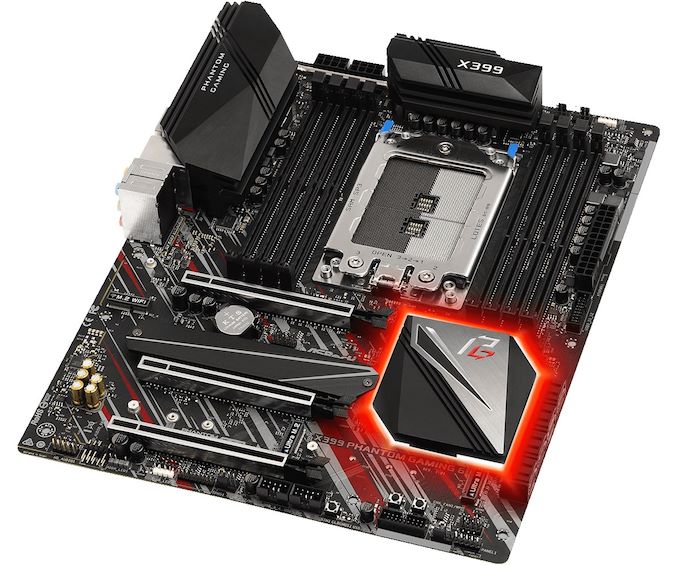 ASRock is advertising this model to feature an 8-phase Digi power delivery with Dr MOS power stages, but the marketing materials suggest that the board is only capable of supporting Threadripper first and second generation processors with a maximum TDP of 180 W. This is confirmed in the X399 Phantom Gaming 6's supported CPU list, which only goes up to the 2950X, and not the 250W TDP SKUs.

ASRock is using the new 2.5G Realtek RTL8125AG Gaming NIC for faster connectivity, which is paired with an Intel I211AT Gigabit port which allows for PXE. The onboard audio is provided by a Realtek ALC1220 HD audio codec. USB support on the rear panel consists of eight USB 3.1 Gen1 Type-A ports, a single USB 3.1 Gen2 Type-A port and a single USB 3.1 Gen2 Type-C port. The board does accommodate a further four USB 2.0 ports and four USB 3.1 Gen1 Type-A ports through internal headers. Finishing off the rear panel is a P/S2 keyboard and mouse combo port.

ASRock has not yet released pricing or availability.