With the ASRock Z390 BIOS, consistency seems to be the aim of the game as the Z390 Phantom Gaming-ITX/ac firmware is very similar to the ASRock Z390 Taichi model which we reviewed at launch. Aside from differences in the specifications, the GUI on the EZ mode screen between both Z390 models is the same and is a good sign for users that demand familiarity. The EZ mode uses a turquoise styled shade of blue and black with greys, while the rest of the firmware uses white text on a Phantom Gaming red and black themed backdrop. 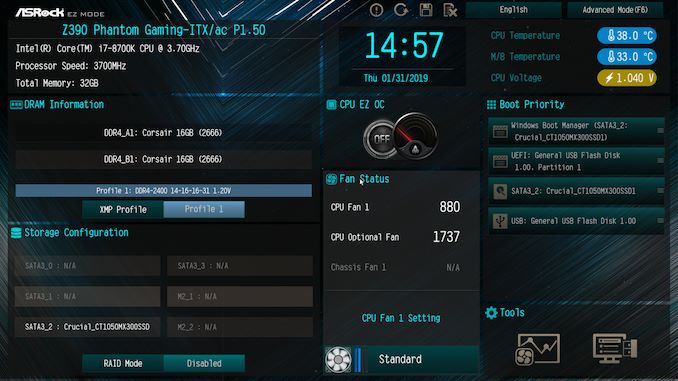 A swift press of the Del key during system POST reveals the EZ mode splash screen; a blocky and descriptive list of information such as installed CPU, memory and storage, as well as fan status for the three available 4-pin headers. Users can enable and disable RAID mode on the four SATA ports, as well as enable XMP 2.0 profiles on compatible memory. In the top left-hand panel is very basic information about the processor and memory, while the right-hand side has boot priority list which users can click and drag to rearrange which suits best. In the bottom right-hand side corner is a clickable tools menu which opens up the Instant Flash, Internet Flash, and FAN-Tastic Tuning utility. With the EZ OC tool, users can select between five different CPU overclocking profiles ranging from 4.5 GHz to 5.0 GHz. 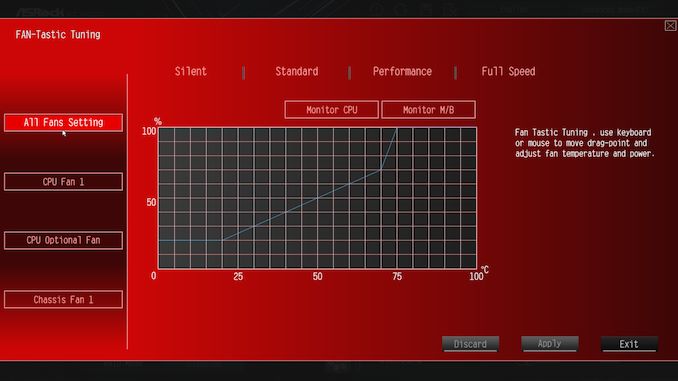 The FAN-Tastic Tuning utility offers fan profile customization with four different presets including silent, standard, performance and full speed. Users can also create their own fan curve profiles based on real-time CPU temperature. Each 4-pin header can be set up individually or all the fans can be synced to run based on the same profile 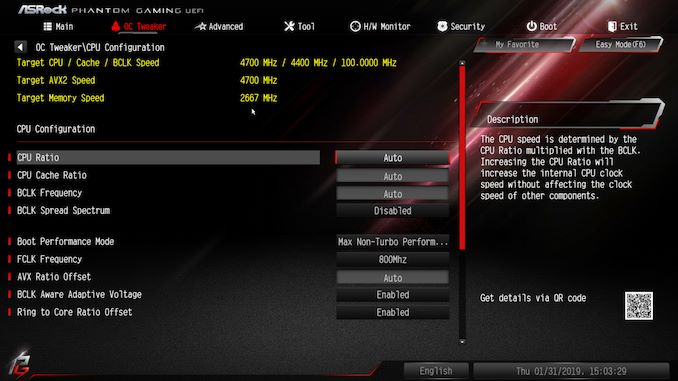 On the EZ mode splash screen, pressing the F6 key opens up the Advanced section. Along the top is a set of sub-headings each with their own range of options for users to customize including OC Tweaker, Advanced, Tool, H/W Monitor, Security, Boot, and Exit. The OC Tweaker is the ASRock UEFI BIOS’s ticket to overclocking and all of the preset overclocking profiles from 4.5 to 5.0 GHz can be applied, as well as the LN2 overclocking preset for extreme overclockers. There is a profile for tight timings with Samsung’s B Die memory and each of the main elements of overclocking are split into three main sections; CPU, DRAM, and Voltage configuration. 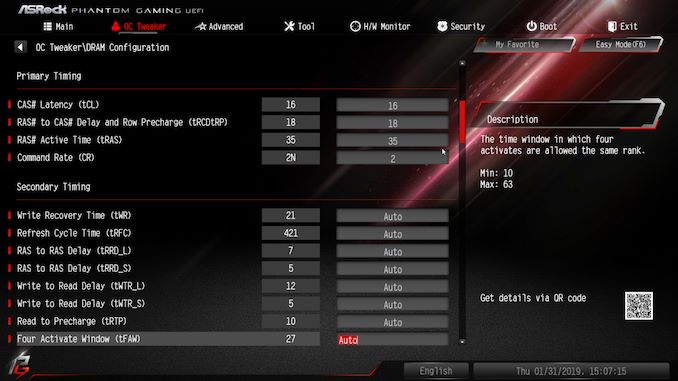 One big feature on the more premium Z390 models has been memory settings; there seems to be more than anyone could shake a stick at. The ASRock Z390 Phantom Gaming-ITX/ac is no different in this regard and the firmware has extensive options for enthusiasts and users looking to fine tune their memory to the maximum. These include frequency tuning through the memory dividers and base clock, primary, secondary and tertiary timings configuration and there are multiple voltages to go through. 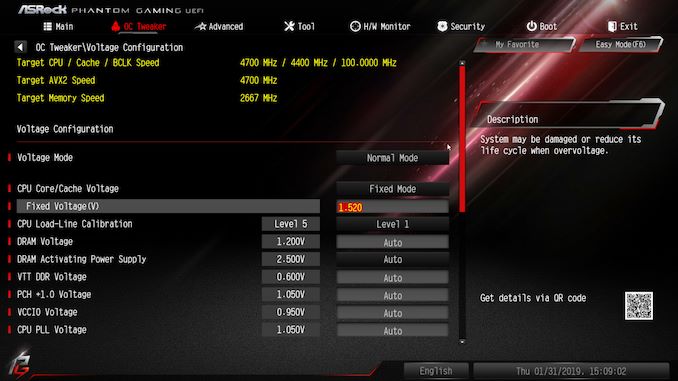 The ASRock Z390 Phantom Gaming-ITX/ac has two main voltage modes for users to select between; normal mode and extreme mode. There isn’t too much to distinguish between the two and the latter is more suited to extreme overclockers. With the normal mode, up to a maximum of 1.52 V can be applied to the CPU VCore which is more than the maximum recommended for ambient cooling methods. The extreme mode allows users to go up to 2.0 V on the VCore which unless users are using extreme cooling methods such as liquid nitrogen, the normal mode offers more than needed. 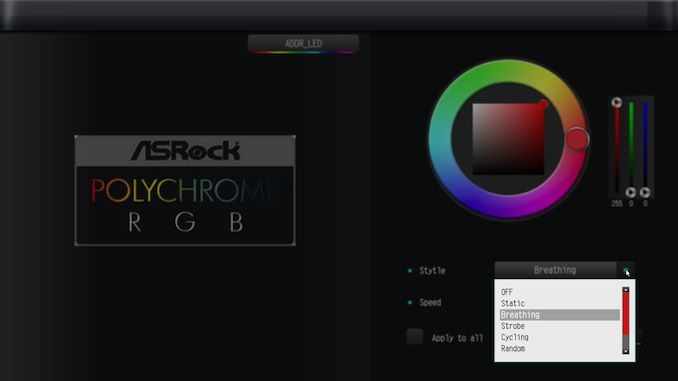 Although there are limited RGB LEDs integrated onto the board with just three LEDs underneath the full-length PCIe 3.0 x16 slot, ASRock Polychrome RGB does offer customization within the BIOS. Not only can the built-in LEDs be changed via the color wheel, but a slider with each individual code is featured on the right-hand side. The lighting effect can be changed as well as allowing for customization on the addressable RGB header and standard RGB header; they can be set individually or synced together for a more uniformed look.

Sometimes manufacturers get firmware right and the Z390 Phantom Gaming-ITX/ac is a shining example. There is RGB customization within with the ASRock Polychrome RGB utility, a basic but intuitive fan profile customization tool is present and there is plenty of options for overclocking installed components; too many for the normal user to make the most of. The ASRock Z390 Phantom Gaming-ITX/ac screams premium and keeps things separate from the general user and the enthusiastic overclocking who usually make abnormal demands such as higher voltage ranges and preset profiles to work from. To make a note, the ASRock firmware is easy to navigate around, and clicks and keypresses are responsive with no input lag.

The ASRock Z390 Phantom Gaming-ITX/ac comes supplied with a pretty lightweight supplement of software with most useful utility in the list coming from the Phantom Gaming Tuning software. There isn’t much that can be specifically classed for ‘gaming’ so to speak, but there are the ASRock Polychrome RGB utility, ASRock’s Live Update, and App Shop software and a Realtek Audio control panel. 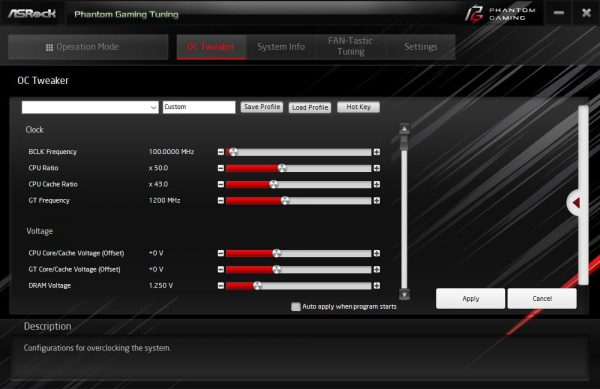 ASRock’s Phantom Gaming Tuning software is identical to the ASRock A-Tuning software we’ve previously seen in our ASRock Z390 Taichi review; the only difference being the new Phantom Gaming red and black themed skin. Users can use Phantom Gaming Tuning to overclock within Windows and tweak settings such as CPU VCore, CPU ratio, CPU cache ratio, and even DRAM voltage; unfortunately, there’s no option to alter memory frequency. Phantom Gaming Tuning also gives access to the FAN-Tastic Tuning for users looking to customize their own fan profiles or set the fans to one of the presets and have at it. All of the five predefined overclocking profiles ranging from 4.5 to 5.0 GHz can be applied with all that’s needed is a simple reboot; the software does prompt this after making key changes. 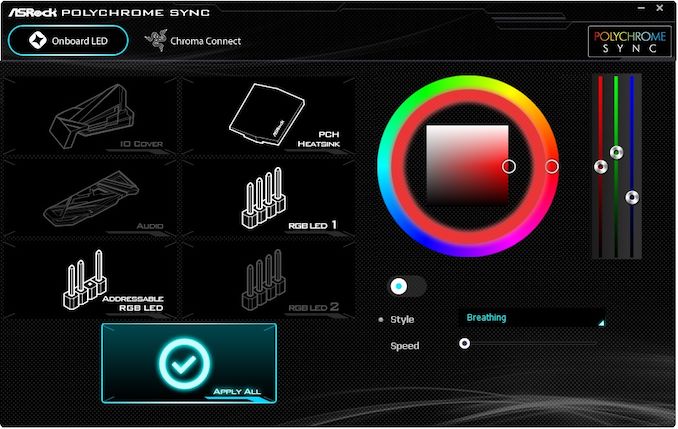 Users can customize the integrated RGB LEDs or strips installed into the two headers via the ASRock Polychrome Sync software. It’s available in the BIOS unlike on the ASRock Z390 Taichi and users can individually apply different colors and effects to different headers, or sync everything together. The software itself is generic throughout the range and is highlighted by depicting parts of the board that doesn’t have LED; nothing unusual however as most vendors recycle utilities and blank out options for different models. 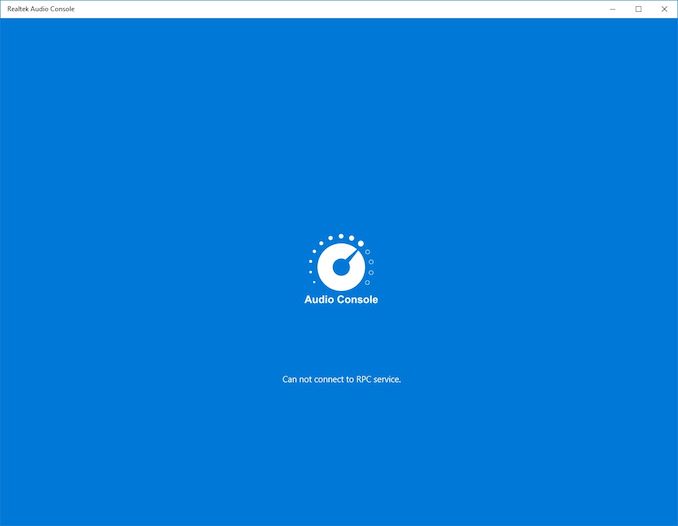 Connecting to the RPC Service proved a task too far...

One of the biggest niggles and gripes in installing the generic Realtek HD Audio Manager is that it has to be downloaded directly from the Microsoft store and isn’t available on the disc, or via the official product page. The base Realtek driver for the ALC1220 codec can be downloaded, but software to make auditory adjustments to things like the equalizer, switch through the different sound effects and even enable Dolby functions do require software. In what is seemingly a common problem across the internet currently when downloading the Realtek Audio Manager is the Audio Console cannot connect to the RPC service.

It has been well documented online with a lot of suggested fixes around the issue; I encountered the issue and I spent at least an hour or two trying to find a workaround but to no avail. This is disappointing as it takes away some of the quality that the Realtek ALC1220 can offer and if it were an isolated incident, it wouldn’t be too bad. Allowing users to download alternative software via the product page or addressing RPC issue would go a long way to making many users overall experience one that’s fruitful. Unfortunately for us, we couldn’t install the Realtek Audio Console directly from the Microsoft App store without encountering this issue, even with three different Windows 10 installation attempts.