The Surface Go features the integrated Intel HD Graphics 615 GPU, and here the advantage of going with a Core based Pentium over an Atom based model in the N Series of processors is more dramatic. The Intel HD 615 features the same 24 execution units as a standard U series Core product, but with a slightly lowered maximum GPU frequency of 850 Mhz compared to something like a Kaby Lake based Core i5 which would be around 1.1 GHz. Intel’s Mobile N Series offers only half the execution units in the Celeron models, and 18 in the Pentium Silver N5000.

We already saw some of this performance delta in the system tests, where PCMark showed somewhat dramatic swings comparing the Pentium Gold 4415Y with the Celeron N4100. Tasks which heavily favored the CPU were somewhat close, but those that leveraged the GPU for gaming or content creation showed a pretty large gain with the Pentium Gold.

Let’s not get ahead of ourselves though. Despite offering twice the execution units as an Atom based processor, this is still an integrated Intel GPU, and therefore it’s going to be slow. It just won’t be quite as slow as an Atom.

Since this is a very low-end GPU, we’ve only run it through our synthetic tests. 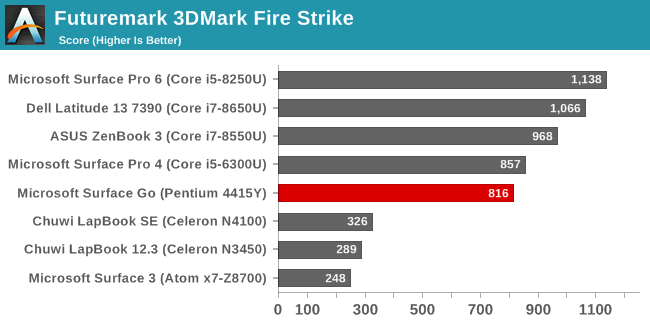 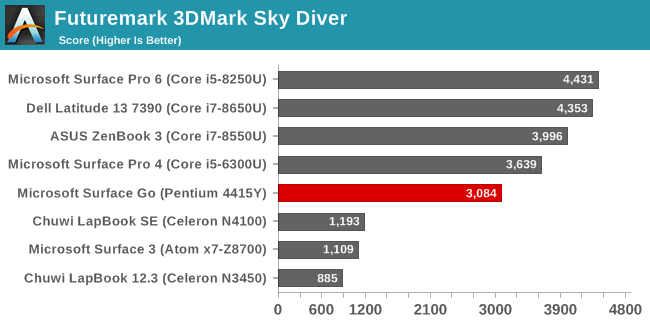 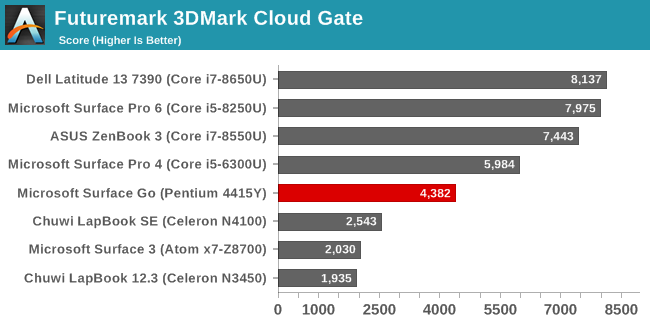 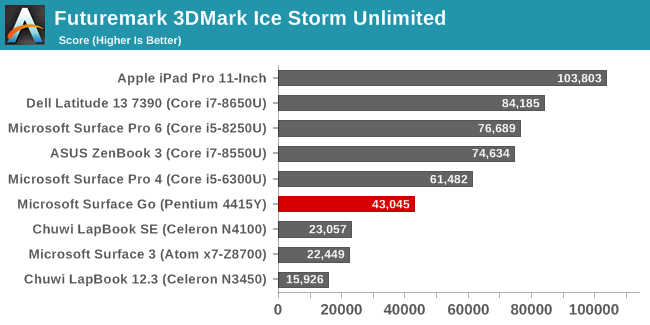 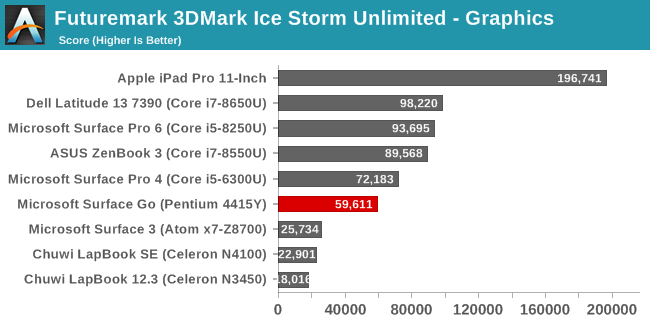 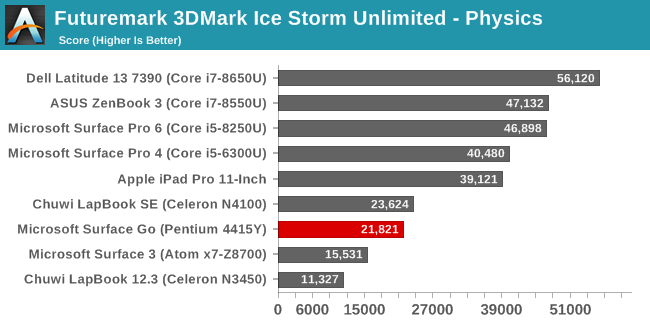 3DMark offers several tests with varying levels of scene complexity, with Fire Strike as the most complex one we run on laptops, followed by Sky Diver, Cloud Gate, and then finally Ice Storm Unlimited which is a test that can also be run on smartphones and tablets.

What’s most interesting is in Fire Strike, if you compare the Kaby Lake based Surface Go with the Skylake based Surface Pro 4, the results are actually quite close. With such a complex scene, the GPU is really the limiting factor more than the CPU, and with both featuring a similar GPU with 24 EUs, the results are really similar, but once the scenes get less complex, the CPU is a larger portion of the task, and the performance drops off fairly dramatically. Ice Storm Unlimited is broken down into the GPU score and the Physics score, with the Physics score being more or less a CPU task, and as we saw on the previous page, the Core i5-6300U is about twice as fast.

Comparing these results to Atom though shows that even though Gemini Lake offers a processor which can meet or beat the Pentium Gold 4415Y, on the GPU side, the meager 12 EUs on Atom are a severe hinderance.

We’re moving over to the latest GFXBench version from Kishonti, which moves away from the OpenGL based tests they offered on Windows, to DirectX 12 with the Aztec Ruins scene. As such, our data is limited, but the results show that the GPU found in the Surface Go is more or less as good as those in higher priced Core offerings, with performance only slightly behind the Surface Pro 6, or even the Y series Apple MacBook Air.

Although the CPU takes a beating when comparing Pentium Gold to Core, the GPU doesn’t suffer the same fate. With the same 24 EUs available as most of the U and Y series Core processors, performance is not hampered quite as much as it is on the CPU side. The overall boost frequency of the GPU is slightly lower compared to a Core i5-6300U, but don’t forget the Pentium Gold 4415Y is also a 6-Watt TDP, so that makes sense. Whereas comparisons on the CPU side with Intel’s latest Atom actually favor the Atom, on the GPU side the Core based Pentium in the Surface Go is much more powerful.

Microsoft offers two storage offerings in the Surface Go, with the base model being just 64 GB of storage, and the higher tier model features 128 GB. The base model is also eMMC, compared to a true PCIe SSD in the 128 GB model, with the review unit featuring a Toshiba BG3 series. Microsoft moved to a BGA SSD on the Surface Pro in the last couple of models, and the Surface Go also goes with a BGA SSD. That does mean the PCIe interface is just two lanes, which will restrict maximum performance compared to a four-lane model. 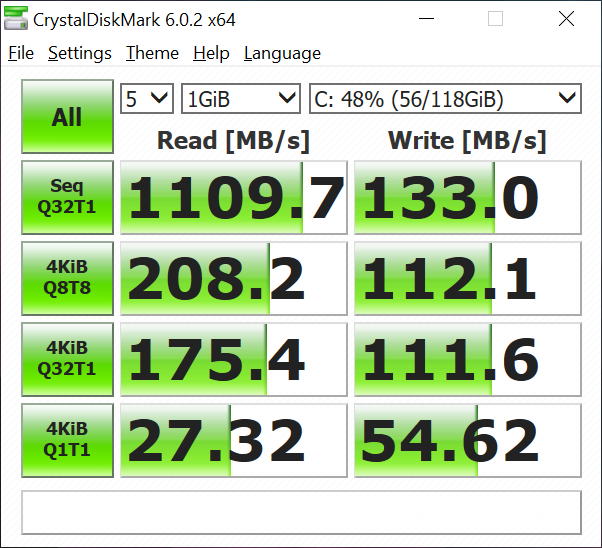 The BGA SSD offers good read performance, but write performance with such a small drive takes a big hit. It would be interesting to see this compared to the eMMC version, but we’ve not had a change to test that one. Odds are it would be significantly less performant.