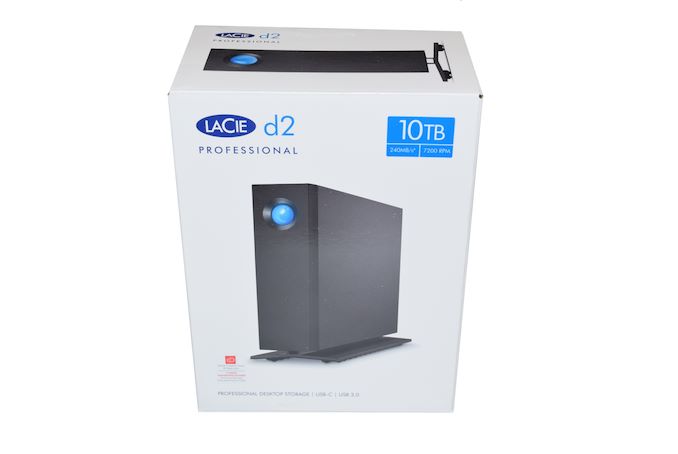 Seagate has a number of direct-attached storage (DAS) products for content creators under the LaCie brand. These include both hard drive and SSD-based units with both USB and Thunderbolt interfaces. While the SSD-based units (such as the LaCie Portable SSD we reviewed recently) are bus-powered, LaCie also has wall-powered enclosures with much higher-capacity hard drives.

Back in 2014, we had evaluated LaCie's d2 Thunderbolt 2 DAS. The LaCie d2 Professional, introduced last year, has a very similar industrial design, but, replaces the Thunderbolt 2 / USB 3.0 interfaces with a single USB 3.1 Gen 2 Type-C interface. The product also moves to a much higher capacity point - while the 2014 version came with a 6TB hard drive, the d2 Professional (2018) version we are looking at today comes with a 10TB drive. In the rest of this capsule review, we're taking a look at the performance and features that d2 Professional can provide for consumers dealing with the need to process and store large amounts of data.

The LaCie d2 Professional is a single hard drive inside a stylish USB 3.1 Gen 2 Type-C enclosure. Seagate uses a BarraCuda Pro, a 7200 RPM desktop drive with a 300TB/yr workload rating, inside the product. The product package comes with a 18W wall-wart (using replaceable plug adapters) and two USB cables (2ft. each). The drive comes pre-formatted in exFAT, and has both Windows and Mac software to enable users to get started with the product. Registration and warranty activation, along with the activation of the value additions (1-month complimentary membership to the Adobe Creative Cloud All Apps plan, amd the Seagate Rescue Data Recovery Service) is possible if the system is connected to the Internet at the time of running the software. The LaCie Toolkit software is also downloaded as part of this setup process.

The LaCie Toolkit helps users to configure the d2 Professional for usage as a backup or a mirroring drive. It also prompts for the formatting of the drive for the best performance, depending on the OS (NTFS on Windows systems). The backup feature is highly configurable - the data / folders to monitor, as well as the backup frequency, can be set up using the Toolkit.

It is trivial to access the internal drive (if the need arises) by removing the three screws in the rear panel. 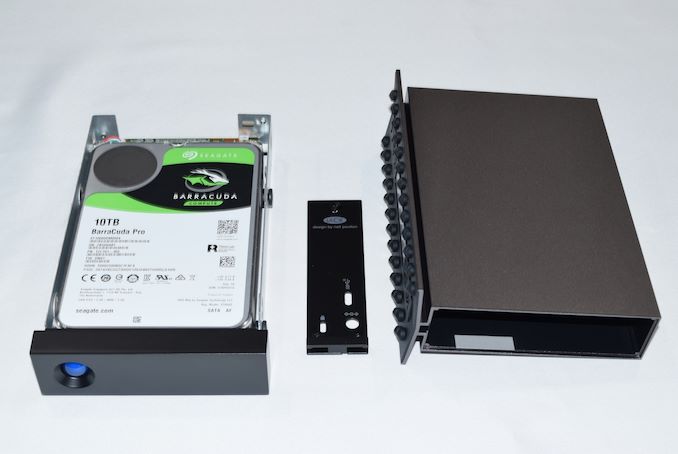 The d2 Professional uses the ASMedia ASM235CM SATA to USB 3.1 Gen 2 Type-C bridge chip. This is the same bridge that we have seen in other Seagate products such as the Seagate Fast SSD and the LaCie Portable SSD. 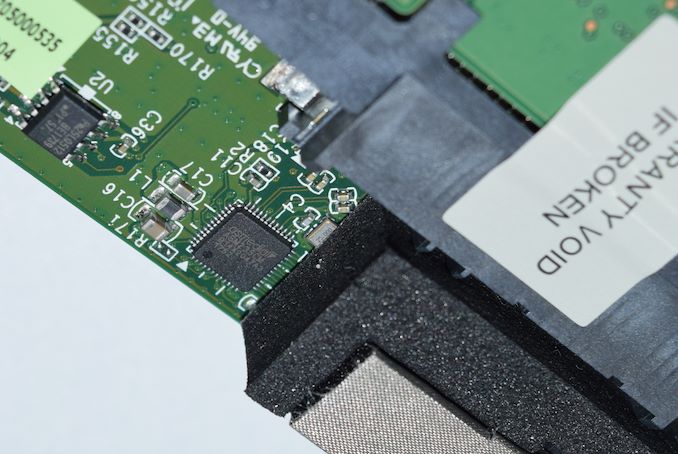 The table below presents the detailed specifications and miscellaneous aspects of the LaCie d2 Professional and how they compare against the other external hard drives evaluated by us in the recent past.

The technical details of the internal drives in the unit is revealed by CrystalDiskInfo. We had reviewed the same model (ST10000DM004) when it was launched in 2016.

Comparing the '4K Q32T1' and '4K' numbers can quickly tell us whether the storage device supports NCQ (native command queuing) / UASP (USB-attached SCSI protocol). If the numbers for the two access traces are in the same ballpark, NCQ / UASP is not supported. This assumes that the host port / drivers on the PC support UASP. These numbers are slightly lower than what we got for the bare drive back in the 2016 review. However, they are far ahead of the other external hard drives in our reviews database.

The test starts off with the Photos folder in a RAM drive in the testbed. robocopy is used with default arguments to mirror it onto the storage drive under test. The content on the RAM drive is then deleted. robocopy is again used to transfer the content, but, from the storage drive under test to the RAM drive. The first segment gives the write speed, while the second one gives the read speed for the storage device. The segments end with the purge of the contents from the storage device. This process is repeated thrice and the average of all the runs is recorded as the performance number. The same procedure is adopted for the Videos and the BR folders. 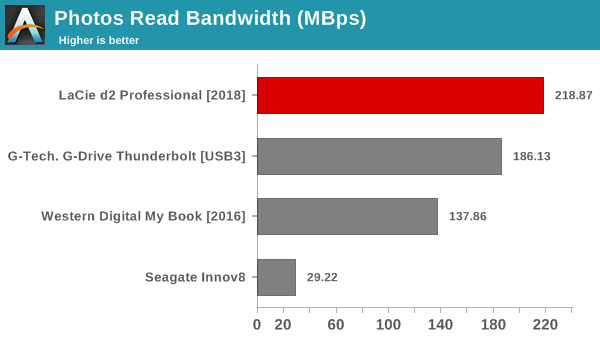 Usually, PC Mark 8 reports time to complete the trace, but the detailed log report has the read and write bandwidth figures which we present in our performance tables. Note that the bandwidth number reported in the results don't involve idle time compression. Results might appear low, but that is part of the workload characteristic. Note that the same CPU is being used for all configurations. Therefore, comparing the numbers for each trace should be possible across different DAS units. 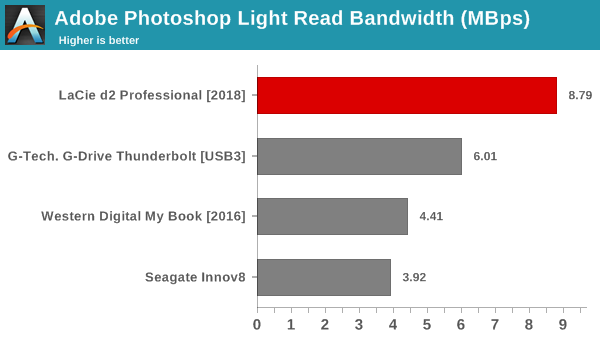 All the benchmarks show that the LaCie d2 Professional has the best performance across all workloads in our database. The higher capacity point and the improved interface (USB 3.1 Gen 2 vs. USB 3.0) are the factors responsible for the higher performance.

The thermal design of the enclosures for HDD-based DAS devices is important because hard drives can't withstand as high a temperature range as flash-based devices. Higher temperatures tend to lower the reliability of the drives. In order to identify the effectiveness with which the enclosure can take away heat from the internal drive, we instrumented our robocopy DAS benchmark suite to record various parameters while the robocopy process took place in the background. Internal temperatures can only be gathered for enclosures that support S.M.A.R.T passthrough. Readers can click on the graphs below to view the full-sized version.

The LaCie d2 Professional keeps the drive at less than 43C throughout the course of the workloads. In fact, it has the best thermal performance of all the enclosures that we have tested. The fact that it also finishes processing the workloads faster is also a contributing factor.

External hard drives are invariably the DAS-type of choice when it comes to cost-effective storage of huge amounts of data. The LaCie d2 Professional offers up to 10TB of storage at prices ranging from $200 (5c/GB) for the 4TB version to $350 (3.5c/GB) for the 10TB one. It also wins out on power efficiency (coming behind only the now EOL-ed Seagate Innov8), with a peak power consumption of just 9.1W for our evaluated workloads. The supplied 2ft. data cables are also the longest amongst all the external wall-powered DAS units that we have evaluated so far.

On the pricing front, we have other options in the market such as the G-Technology USB 3.0 Type-C drive with PD at $300 and its vanilla Type-A variant at $284. Value options with a vanilla USB 3.0 interface (and much lower peak performance) include the Seagate Expansion at $250, WD Elements at $214, and the WD Easystore at $210. Thunderbolt 3-enabled external hard drives, such as the LaCie d2 Thunderbolt 3 ($500) and the G-Technology G-Drive with Thunderbolt 3 ($550), come with additional features and are appropriately priced higher.