Earlier leaks had indicated that the M15 (codenamed Carson Beach) would add a 128GB capacity, but so far Intel is only announcing the same three capacities offered by the Optane Memory M10: 16GB, 32GB and 64GB. The Optane M10's hardware is also sold as the Optane SSD 800P, and that product line does include a 128GB/118GB model. The upcoming Optane SSD 815P that will similarly share a hardware platform with the Optane Memory M15 is expected to continue offering both 58GB and 118GB usable capacities.

Doubling the width of the PCIe interface doesn't provide a doubling of any of the performance metrics Intel specifies for the M15, but random read throughput does increase by 80%. Maximum power draw has increased from 3.5 W to 5.5 W, but idle power has been cut in half and should now be competitive with most flash-based NVMe SSDs.

Intel's PR photos of the Optane Memory M15 show very little change to the layout of the board, and in particular the controller doesn't seem to be any larger than the original PCIe x2 version. Adding two more PCIe lanes without increasing the controller package size isn't too hard, but given how small the controller still is, we're pretty sure that the interface between the controller and the 3D XPoint media isn't any wider. 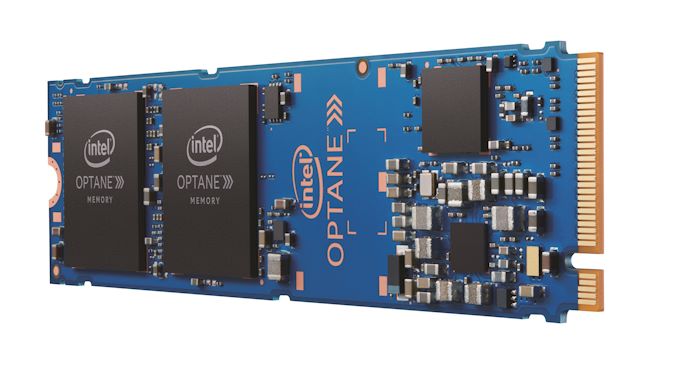 Officially, the Optane Memory M15 still requires a Kaby Lake or newer platform, so it has broader compatibility than the Optane Memory H10 that requires a Coffee Lake or newer system to support its two drives on one card design. The driver requirement has been bumped from Intel RST version 15.7 or newer up to RST version 17 or newer. However, the processor and driver requirements only apply to using Intel's Optane Memory caching software for Windows; without it the M15 is another standard M.2 NVMe SSD that's unusually small and fast compared to flash-based NVMe SSDs.

The Optane Memory M15 will be available for purchase starting around the middle of Q3, so we're hoping to receive a review sample within a month or so. Pricing has not yet been announced. Leaked roadmaps showed that Intel had previously planned to launch the M15, the Optane Memory H10 and the still unofficial Optane SSD 815P all at the beginning of 2019. The H10 was officially launched in April and is now available as an OEM-only part in some new notebooks.