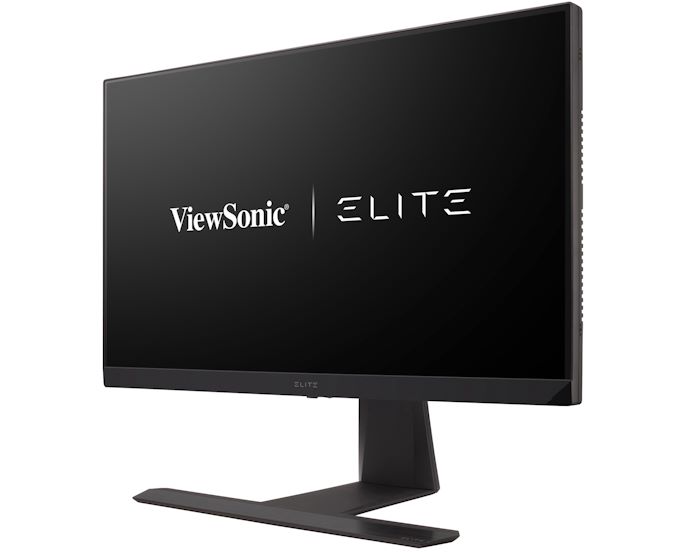 Aiming at demanding hardcore and esports gamers, ViewSonic this week introduced its new gaming display that uses a ‘fast IPS’ panel with a 240 Hz maximum refresh rate. The Elite XG270 is among the first monitors in the industry to offer a unique combination of rich colors, wide viewing angles, HDR10, and a variable refresh rate of up to 240 Hz.

The ViewSonic Elite XG270 is based a 27-inch panel featuring a 1920×1080 resolution along with all the features that the ‘fast IPS’ technology is known for today, including 400 nits brightness, a 1000:1 contrast ratio, 178°/178° viewing angles, a 1 ms GtG response time. The monitor can display 16.7 million of colors and reproduce 99% of the sRGB color space, which is in line with other LCDs using the same panel.

For hardcore gamers, the key feature of the Elite XG270 is its variable refresh rate of up to 240 Hz. In an official document, the monitor supports VESA’s Adaptive Sync technology, yet in its press release ViewSonic claims AMD’s FreeSync support, which may indicate that the company has submitted the monitor to AMD for certification and fully expects it to pass it as the vast majority of Adaptive Sync-enabled displays can do it. Considering the fact that the monitor will be available only several weeks from now, the company has time.

The monitor also fully supports HDR10, so console gamers with HDR10-supporting titles will probably be pleased, even though its level of luminance is considered rather low for HDR, so the actual HDR user experience is something that remains to be seen.

As added bonuses, the Elite XG270 display comes with 3 W stereo speakers (and probably a headphone output too), an Elite display controller, a mouse bungee, and a headphone hook. Unfortunately, right now ViewSonic does not disclose what kind of display inputs the monitor has, though it is reasonable to expect at least a DisplayPort and an HDMI.

ViewSonic’s Elite XG270 gaming display will be available in November at an estimated retail price of around $429.99, which is considerably below MSRP of Dell’s Alienware 27 (AW2720HF) that features similar key characteristics (27-inch, fast IPS, 240 Hz) yet sells for $599.99.

Note: Image is for illustrative purposes only