It would now appear we are saturated with two phase immersion liquid cooling (2PILC) – pun intended. One common element from the annual Supercomputing trade show, as well as the odd system at Computex and Mobile World Congress, is the push from some parts of the industry towards fully immersed systems in order to drive cooling. Last year at SC19 we saw a large number of systems featuring this technology – this year the presence was limited to a few key deployments. 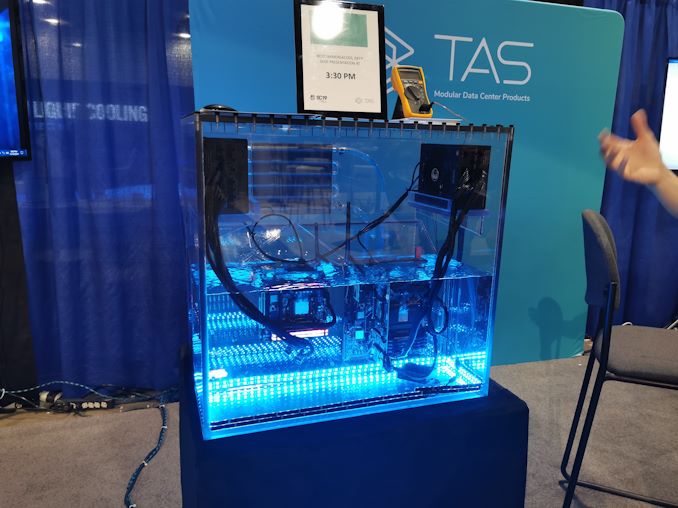 Two Phase Immersion Liquid Cooling (2PILC) involves a server with next to no heatsinks, and putting it into a liquid that has a low boiling point. These liquids are often organic compounds (so not water, or oil) that give direct contact to the silicon and as the silicon is used it will give off heat which is transferred into the liquid around it, causing it to boil. The most common liquids are variants of 3M Novec of Fluorinert, which can have boiling points around 59C. Because it turns the liquid into a gas, the gas rises, forcing convection of the liquid. The liquid then condenses on a cold plate / water pipe and falls back into the system. 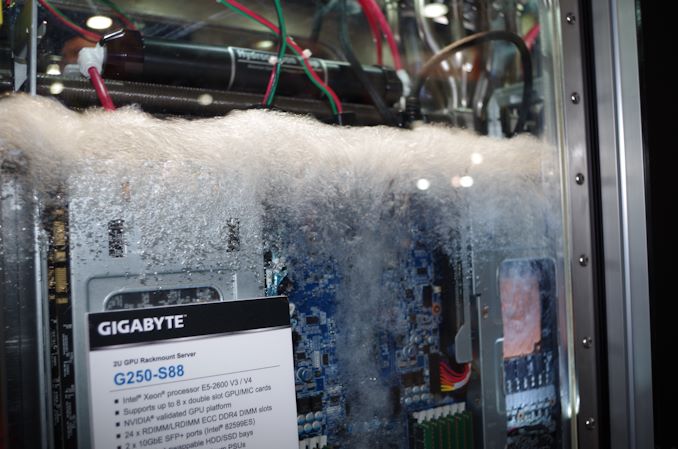 GIGABYTE from a previous show

These liquids are obviously non-ionic and so do not transfer electricity, and are of a medium viscocity in order to facilitate effective natural convection. Some deployments have extra forced convection which helps with liquid transport and supports higher TDPs. But the idea is that with a server or PC in this material, everything can be kept at a reasonable temperature, and it also supports super dense designs. 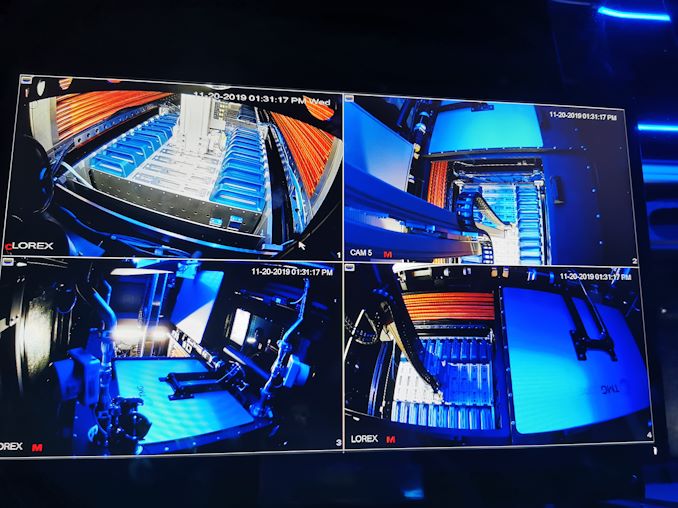 We reported on TMGcore’s OTTO systems, which involve this 2PILC technology to create data center units up to 60 kilowatts in 16 square feet – all the customer needs to do is supply power, water, and a network connection. Those systems also had automated pickup and removal, should maintenance be required. Companies like TMGcore cite that the 2PILC technology often allows for increased longevity of the hardware, due to the controlled environment.

One of the key directions of this technology last year was for crypto systems, or super-dense co-processors. We saw some of that again at SC19 this year, but not nearly as much. We also didn’t see any 2PILC servers directed towards 5G compute at the edge, which was also a common theme last year. All the 2PILC companies on the show floor this year were geared towards self-contained easy-to-install data center cubes that require little maintenance. This is perhaps unsurprising, given that 2PILC support without a dedicated unit is quite difficult without a data center ground up design.

One thing we did see was that component companies, such as companies building VRMs, were validating their hardware for 2PILC environments.

Typically a data center will discuss its energy efficiency in terms of PUE, or Power Usage Effectiveness. A PUE of 1.50 for example means that for every 1.5 megawatts of power used, 1 megawatt of useful work is performed. Standard air-cooled data centers can have a PUE of 1.3-1.5, or purpose built air-cooled datacenters can go as low as a PUE of 1.07. Liquid cooled datacenters are also around this 1.05-1.10 PUE, depending on the construction. The self-contained 2PILC units we saw at Supercomputing this year were advertising PUE values of 1.028, which is the lowest I’ve ever seen. That being said, given the technology behind them, I wouldn’t be surprised if a 2PILC rack would cost 10x of a standard air-cooled rack.