Computex 2020 Moved to September In Response to Coronavirus Pandemic 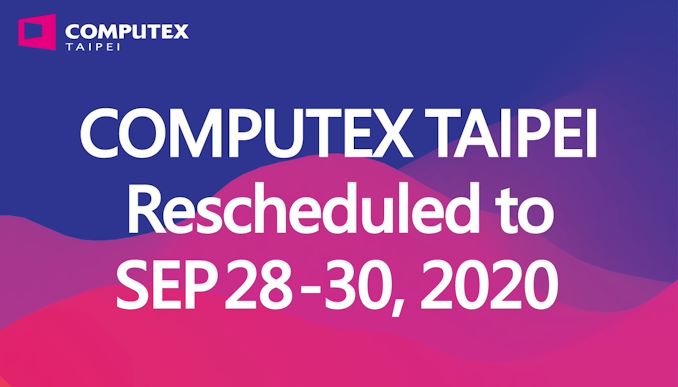 Over the past month and a half, we’ve written about several technology industry trade shows that had been radically transformed, virtualized, or outright canceled due to the ongoing SARS-CoV-2 coronavirus pandemic. And now the epidemic has put the brakes on one of the largest tradeshows yet, with Computex organizer TAITRA officially postponing the show to late September.

As one of the biggest IT trade shows in the world, and easily the largest show for PC products period, Computex is a major event for the industry as a whole. The Taiwanese show brings together local vendors from Taiwan, foreign vendors from China, the United States, and beyond, as well as press and buyers from all over. The 2020 show in particular was expected to be a big draw on the PC side of matters, as both AMD and Intel were relatively quiet at CES 2020, instead gearing up to deliver their next generation of products later this year.

Unfortunately, despite their best efforts to keep the show on schedule, TAITRA has finally had to bow to the worsening coronavirus situation, and abort their plans to host the show in early June as previously scheduled. Interestingly, the group is not canceling the show outright, and instead has rescheduled it to September 28th through the 30th. To date, very few events have successfully been rescheduled to later dates, but then TAITRA is the first to try to move an event to the fall, and citing analyst reports, believes that the coronavirus situation will be under control before the rescheduled show is set to take place.

Overall, this marks the second time that Computex has been disrupted due to a coronavirus outbreak. The show was famously delayed in 2003, when the original SARS virus resulted in the show being rescheduled to a similar late-September showing. And although it was significantly reduced in size, the rescheduled show was none the less a small success. So here’s to hoping we’ll be reporting the same thing later this year in September of 2020.