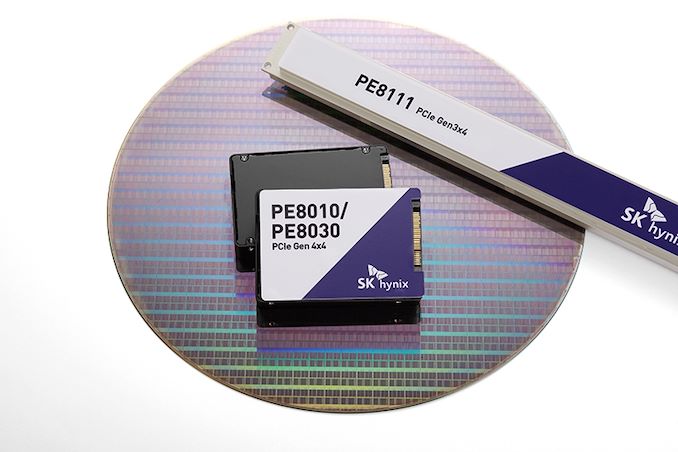 SK Hynix today announced that they’ve begun sampling of its first ever PCIe 4.0 enterprise SSDs in the form of the new 96-layer 3D-NAND U.2/U.3 form-factor PE8010 and PE8030 eSSDs, as well as announcing plans to sample the new PE81111 EDSFF E1.L SSDs based on their 128-layer “4D NAND” flash modules later in the year.

We had expected the new PE8111 eSSD for some time know as we reported about SK Hynix’s plans to introduce such a product last November. The biggest change here is the company’s use of new 128-layer 3D NAND modules that the company dubs as “4D-NAND” because of a new denser cell structure design and higher per-die I/O speeds.

The PE8111 still retains as PCIe 3.0 interface and its corresponding performance characteristics plateau at 3400MB/s sequential reads and 3000MB/s sequential writes – whilst supporting random reads and writes up to respectively 700K and 100K IOPs. Because it’s a long-factor EDSFF E1.L form-factor, storage capacity for the unit falls in at 16TB, and SK Hynix is reporting that they’re working on a 32TB solution in the future.

The new PE8010 and PE8030 come in an U.2/U.3 form-factor and are the company’s first SSDs support PCIe 4.0. The SSDs here still rely on 96-layer NAND modules from the company – but are using an in-house controller chip. Bandwidth here is naturally higher, reaching up to 6500MB/s reads and 3700MB/s write sequentially, with random IOPs falling in at respectively 1100K for reads and 320K for writes.

Power consumption for the new U.2/U.3 drives is actually extremely competitive given their jump to PCIe 4.0 – rising only up to 17W as opposed to their previous generation PCIe 3.0 products which fell in at 14W. This is likely to be attributed to the new generation custom controller, which might be more optimised for low-power compared some or the early third-party 4.0 controllers out there.

The PE8010 and PE8030 are sampling right now with customers – with the PE8111 planned to be sampled in the second half of the year.