Kicking off our look at performance, let's start with SPEC and analyzing how AMD managed to increase the performance against Picasso with its first-generation Zen cores. The newer generation Renoir with Zen2 cores should in theory see more significant performance upgrades thanks to the improved IPC of the new microarchitecture – but today’s 4700U also is just a mid-tier part with a lower 15W TDP as well as “just” featuring DDR4-3200 – not the fullest memory configuration possible as the SoC also support LPDDR4X up to 4266 MHz.

For our SPEC harness, We’re testing under WSL1 in Windows due to simplicity of compilation and compatibility, and are compiling the suite under LLVM compilers. The choice of LLVM is related to being able to have similar code generation across architectures and platforms. Our compiler versions and settings are as follows:

Our compiler flags are straightforward, with basic –Ofast and relevant ISA switches to allow for AVX2 instructions. 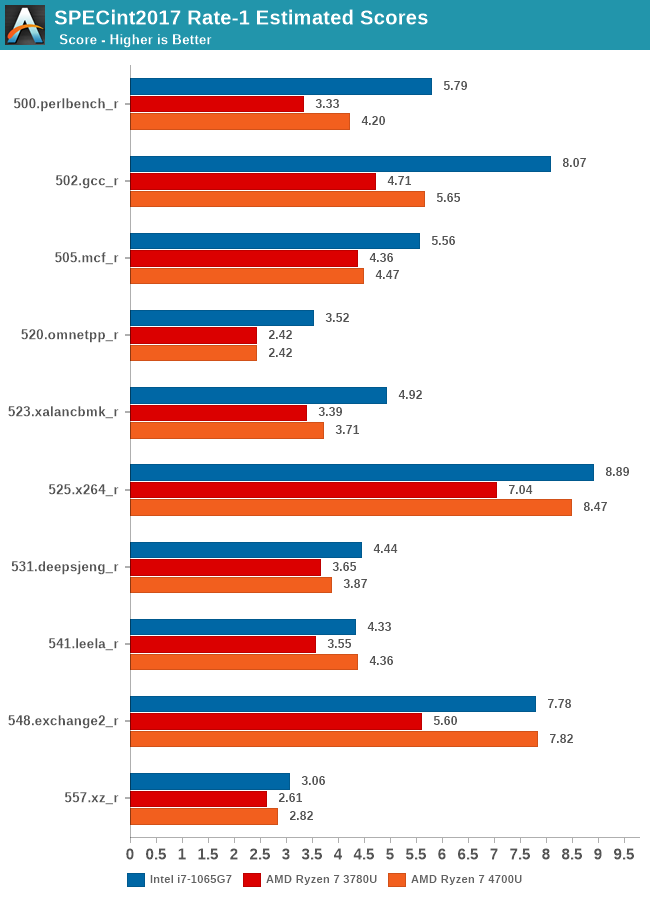 In SPECint2017, the new Zen2 based Ryzen 7 4700U is performing well, although the score increase compared to the last-generation 3780U aren’t as big for some workloads. As a reminder, the 3780U clocks up to 4.0GHz in terms of boost clocks while the 4700U clocks up to 4.1GHz. SMT being disabled on the 4700U should also give it a slight advantage in IPC over other Zen2 platforms given that it doesn’t have to statically share some core resources anymore in this mode.

Renoir showcases the biggest increases in workloads such as 548.exchange2_r and 525.x264_r which are back-end execution bound workloads, and the microarchitectural improvements here help a lot.

On the other hand, the weakest improvements are seen in workloads such as 520.omnetpp_r – this test is mostly memory latency bound and unfortunately the new chip here barely just matches its predecessor. The same can be said about 505.mcf_r where the improvements are quite meager.

The generational improvements here aren’t enough to catch up to Intel’s Sunny Cove cores in the Ice Lake i7-1065G7. Although that core might be running at higher single-core TDPs and power consumption, it still makes for a big gap in some of the more instruction pressure and cache pressure high workloads such as 500.perlbench_r and 502.gcc_r where the Intel chip still has a considerable lead in. 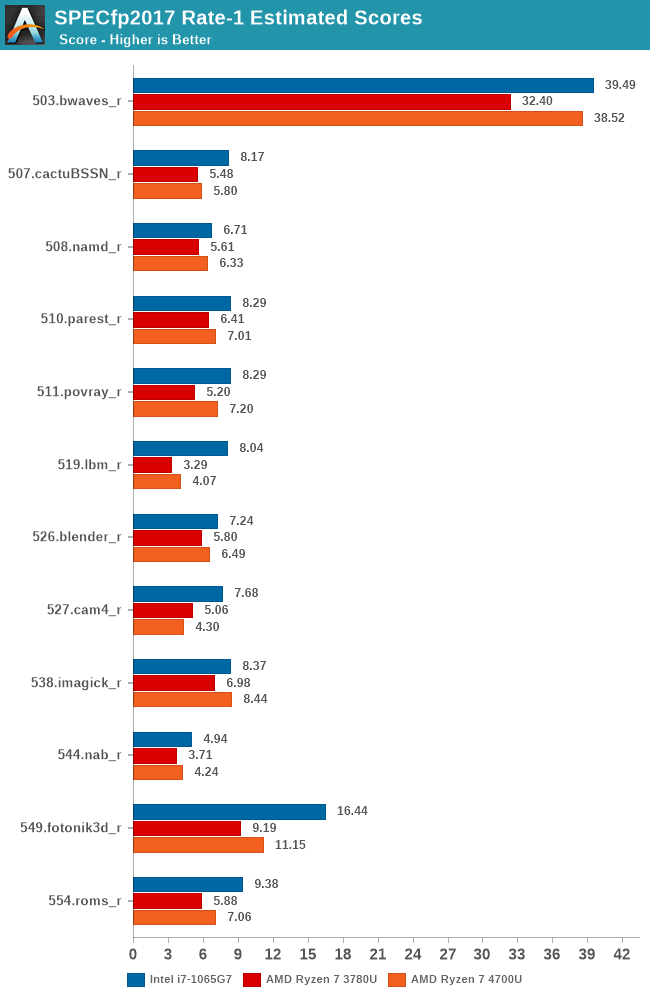 In SPECfp2017, these are floating point heavier test workloads. The generational increases here are also relatively smaller, with even an odd regression in 527.cam4_r. The Intel chip still has a lead across the board, and with particular large gaps in the more memory heavy workloads such as 519.lbm_r and 549.fotonik3d_r. 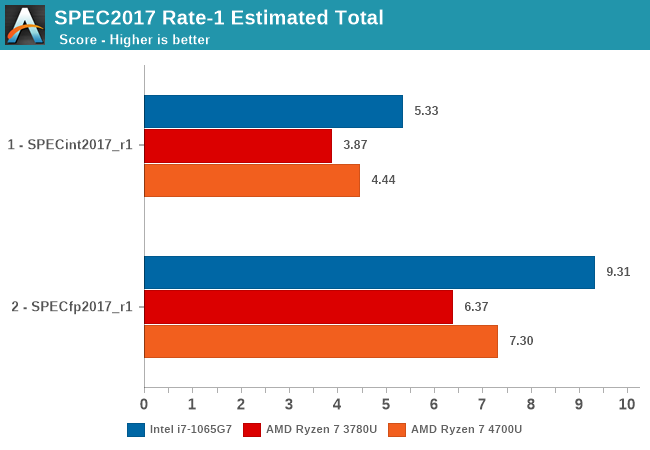 Overall, in terms of single-threaded performance, the Zen2 Renoir chip might seem a bit underwhelming, but when looking at the IPC improvement it’s actually not that far off from what’s expected of the new microarchitecture. In both SPECint and SPECfp we see a 12% performance per clock improvement, which is generally in line with Zen2’s generational improvements. As a reminder, the mobile chips here only feature a quarter the CCX L3 cache compared to its desktop counterparts, and that will result in smaller IPC gains, especially in memory heavy workloads.

AMD’s higher-end SKUs such as the 4900HS score slightly better due to the higher boost frequencies, but nothing significant enough to change the single-threaded competitive landscape; Intel still has a substantial advantage here thanks to a much stronger memory subsystem.

The multi-threaded performance comparison today is actually quite interesting just for the fact that the 4700U doesn’t feature SMT. Whilst it lacks multi-threading on the cores, it makes up for it by simply having 8 physical cores on the chip, double that of Picasso-based SoCs as well as Intel’s latest Ice Lake CPUs. Again, performance here will be strongly impacted by the TDP as well as cooling of the systems. Both AMD parts are 15W TDP designs, while the Intel chip sustains 25W. 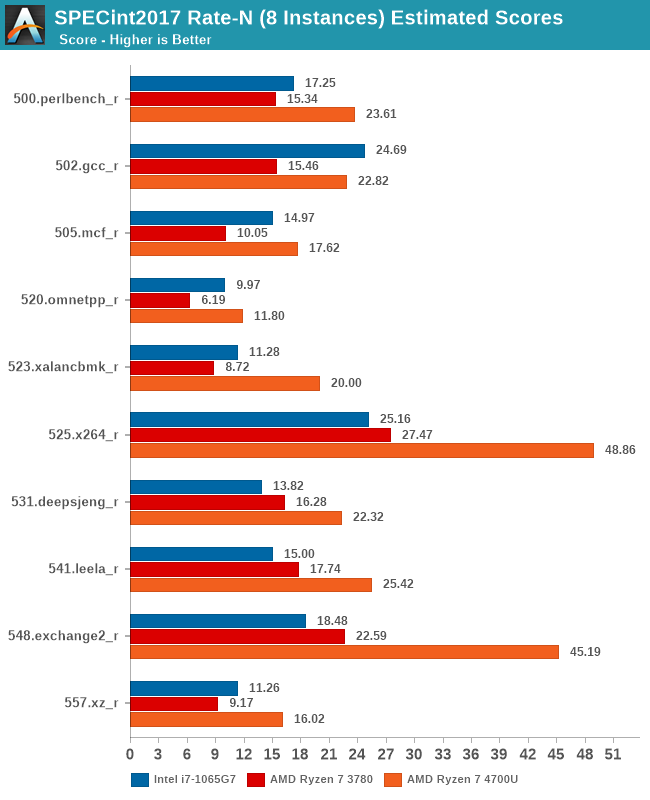 The resulting multi-threaded performance is quite varied across the benchmarks. What immediately stands out is that in purer execution heavy workloads the new Renoir chip pretty much demolishes its predecessor as well as the competition. This makes sense given that Zen2 has good execution resources and Renoir has double the physical core count to scale up performance.

Renoir’s performance here is very good across most workloads, but there’s a few workloads where Intel’s Ice Lake CPU comes closes or beats it even (502.gcc_r) – again these are the workloads that are most memory intensive. 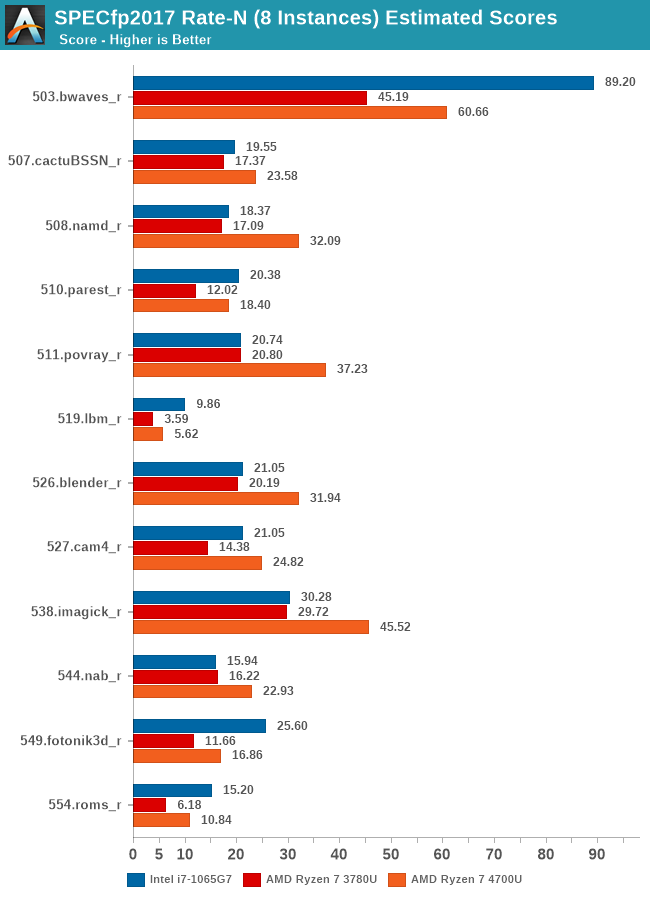 SPECfp across 8 instances again shows similar results. Renoir fares extremely well across execution bound workloads, but this time around loses a lot more often against the Ice Lake chip in memory-bound workloads even though it has a 2x core count advantage.

The chip’s performance in memory-bandwidth heavy 519.lbm_r is particularly odd as it manages to fare worse than single-core results of a desktop Zen2 based system, and again far behind the Ice Lake counterparts. 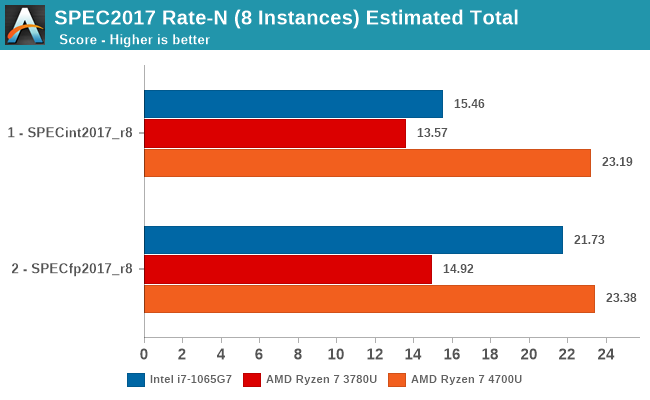 Overall, AMD’s 4700U’s multi-threaded performance is fantastic in areas where it should matter most in a laptop-based system. The 2x core count advantage more than makes up for the lack of SMT, and workloads such as rendering and other creative tasks are the platform’s strong-points. In more memory-heavy workloads, performance doesn’t scale all that well as clearly the new chip still has a big weakness in its memory subsystem – scientific workloads or code compiling won’t scale nearly as well.

We have to wonder how Renoir will fare on an LPDDR4X configured system – unfortunately we haven’t been able to test such a platform yet. Overall, the 4700U seems like an excellent chip given its 15W TDP, but let’s see how it performs in our system benchmark suite…