When we reviewed the XPS 13 2-in-1 back in November, it was the first device we had tested which featured the new 10 nm Intel Ice Lake platform. At that time, Dell had also recently refreshed the XPS 13, but had outfitted it with the older 14 nm Comet Lake platform. For the all-new XPS 13, Dell has now brought parity to their lineup with Ice Lake here as well, with the improvements that platform brings, especially to the graphics side.

Dell offers three processor options. The least-expensive offering is the Core i3-1005G1, the mid-tier outfitted with the Core i5-1035G1, and the top-tier offering the Core i7-1065G7. Our review unit features the Core i7 model, as Dell wanted to put its best foot forward. 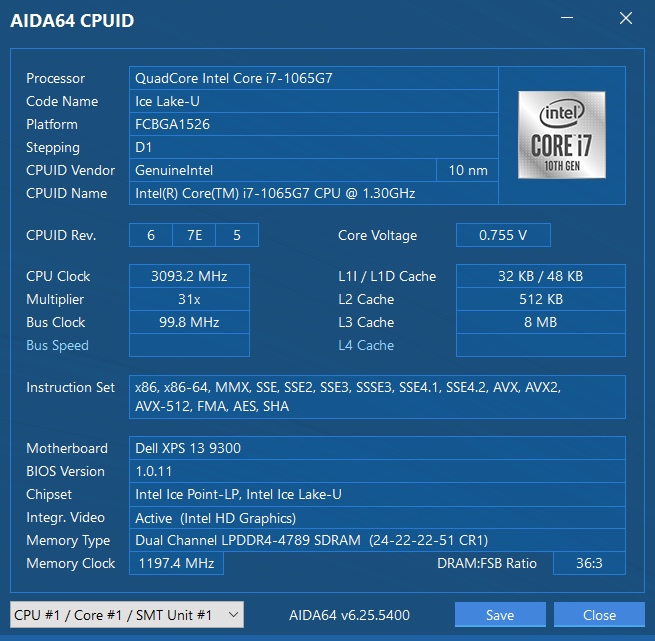 On the memory side, Dell’s spec sheet shows a 4 GB base, although thankfully that is nowhere to be found on their Dell.com site, at least for the USA. Thanks to the move to LPDDR4X with Ice Lake, Dell now offers up to 32 GB of memory on the XPS 13. Storage is all PCIe x4 NVMe, with 256 GB as the base, and a 2 TB maximum.

To see how the XPS 13 performs, we have run it through our newly updated laptop suite. Please not that if a graph does not contain a specific older device, that means that the test has not been run on it. Since the laptops are returned to the manufacturer after review, we cannot do any regression testing for the most part. If you’d like to compare the XPS 13 to any other laptop we have tested, please refer to our Online Bench.

UL’s PCMark 10 is a whole-system benchmark, testing everything from CPU performance to app loading time. The Overall score consists of three categories, each featuring their own unique sub-tests. Overall the XPS 13 scored right in the same ballpark as other Ice Lake notebooks, although was slightly down in the Productivity tests, but slightly ahead in the other two.

Cinebench, based on Maxon’s Cinema 4D rendering, allows tests of both single-threaded and multi-threaded runs, making it one of the more popular tests for overall computational performance. The XPS 13 does well compared to other Ice Lake equipped notebooks, although with AMD offering up to 8 cores in the same 15-Watt TDP, Intel falls behind in the multi-threaded run.

In our Handbrake encoding test, we transcode a 1080p movie to 720p using both software and hardware encoders. Software encoders utilize the CPU, and are generally the preferred method for optimal quality, whereas hardware encoders leverage the media blocks, which in this case is Intel’s QuickSync, for a much faster encode. As we will see more in the thermals section, Dell limits the XPS 13 to a 15-Watt TDP even in its maximum performance mode, where some other manufacturers will allow for higher than listed TDP, up to 20 Watts or so, and as such, the XPS 13 falls a bit behind other Ice Lake notebooks in this test which is TDP limited.

The popular file compression and decompression tool 7-Zip includes a built-in benchmark, and once again the XPS 13 slots right into where other Ice Lake notebooks fit.

Web performance is a function of not only the CPU performance, but also the browser’s scripting engine, and as such we have standardized on the Microsoft Edge browser. Microsoft has now transitioned their browser to the open-source Chromium project. Due to this, we have reset our web tests to use the new Chromium based Edge and taken the opportunity to decommission some of the older tests. We will now focus on Speedometer 2.0 and WebXPRT 3.

The XPS 13 again slots right in where you would expect for an i7-1065G7 based system.

Dell offers from 256 GB to 2 TB of PCIe storage, and the review unit was outfitted with the Intel 600p 512 GB drive. We are transitioning to the PCMark 10 storage benchmark, which uses test traces of actual common workloads, such as booting Windows, and many of the Adobe applications, and as such should be a much better indicator of drive performance than just maximum transfer rates.

The Intel 600p performs quite well, with good access times and solid bandwidth. Surprisingly, it can’t quite match the excellent performance we saw from the SK Hynix 2230 form factor SSD in the Surface Laptop 3, but almost matches it.