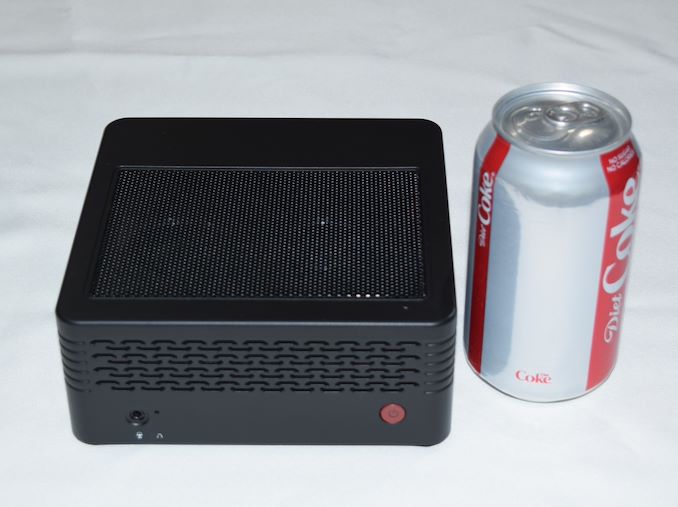 MinisForum has been making some interesting moves in the last few months with their computing platforms, ranging from the DMAF5 based on the Ryzen 3000H-series SoCs to the Ice Lake-based DeskMini X35G. In early August, they reached out to us to pitch their first mini-PC sporting a discrete GPU - the EliteMini H31G. Intrigued by their claims of being able to cram a 65W CPU and a 75W GPU in a chassis measuring approximately 15cm x 15cm x 6cm, we accepted their offer of a review unit to put through our standard mini-PC benchmarking process. The sample arrived last week, but we have a few thoughts to share.

The EliteMini H31G is a compact mini-PC smaller than other dGPU-equipped mini-PCs we have reviewed before like the ASRock DeskMini Z370 GTX 1060 and the Ghost Canyon NUC. A look at the unit reminded me of the GIGABYTE BRIX Gaming BXi5G-760 we had reviewed back in 2014. Our review sample came with a Core i5-9500F 65W CPU pre-installed, along with a GTX 1050 Ti MXM card with a TDP of 75W. As the naming of the kit indicates, the board uses a H310 PCH. 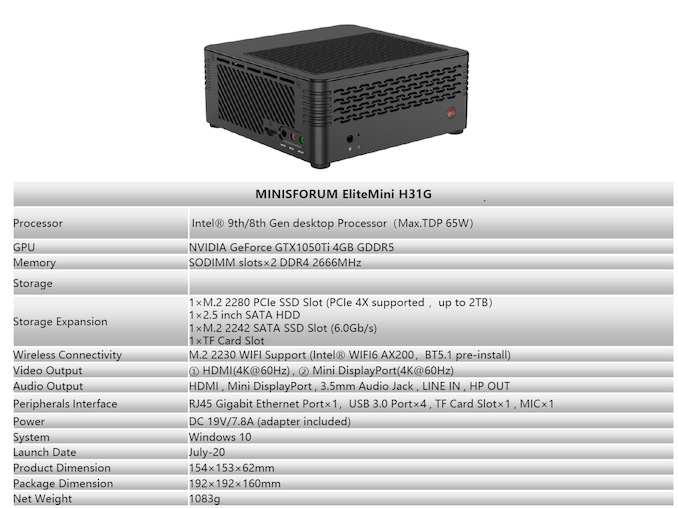 The system uses a unique integrated dual-fan cooling system - the first time we have seen this type of design in a mini-PC. The dual-fan configuration in the BRIX Gaming kit was just two fans crammed into one end of the case, while the cooling kit in the H31G appears to be much better thought out. Obviously, these are early days and I am not passing any judgement on the effectiveness without putting it through our thermal stress test. The BRIX Gaming kit was cooling a 47W CPU and a 100W GPU, while the H31G is handling a 65W CPU and a 75W GPU. There was a reason for GIGABYTE to redesign their Gaming BRIX units from scratch for the newer iterations - so I am really looking forward to seeing how the H31G handles thermal stress from both the CPU and GPU simultaneously. Readers interested in a full breakdown of the cooling system should view the official launch video of the EliteMini H31G. 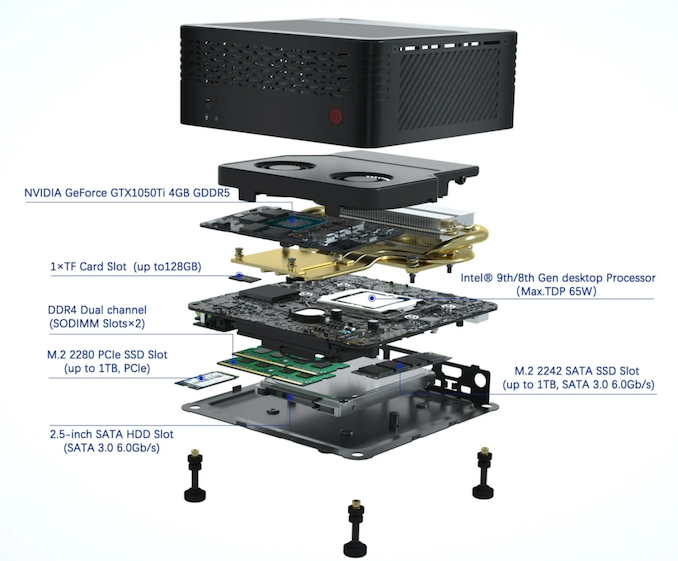 Our review sample shipped with a single 8GB DDR4 SODIMM, and a 256GB Kingston M.2 2280 NVMe drive. The system's performance is bound to be better with both SODIMM slots occupied, but we are proceeding with the review of the supplied configuration as-is (it happens to be one of the pre-built configurations available for purchase). The gallery below shows some of the internals of the system, and a size comparison against other mini-PCs with dGPUs.

Based on our experience with setting up the system and our first round of benchmarking, we found some minor annoyances and a few interesting aspects:

The barebones version (without a CPU, but with the MXM GTX 1050 Ti module) is priced at $399. Our review configuration (Core i5-9500F, 8GB RAM, 256GB SSD) is priced at $629. The main challenge for MinisForum is that the system design, though unique, carries technology that is almost 3 years old at this point - a Kaby Lake or Coffee Lake desktop CPU, along with a Pascal GPU. Fortunately, the system is priced accordingly. The ASRock Deskmini Z370 GTX 1060 was launched at $800 - the MinisForum EliteMini H31G is being marketed for half of that. It would have been preferable for MinisForum to use a more modern CPU and GPU for this project. That said, having an effective working system based on older components might just give them the impetus to use the design with newer CPUs and GPUs.