The heart of any gaming laptop is the GPU, and with the AMD Radeon RX 6800M, the ASUS Strix G513QY offers one of the fastest GPUs in a notebook computer. AMD’s latest RDNA2 graphics architecture is at the core of the platform, which also offers new synergies when paired with the AMD Ryzen 5000 processor.

The AMD Radeon RX 6800M sits at the top of their product stack, and AMD feels it can go toe to toe with NVIDIA’s RTX 3080L. Designed for systems with 145-Watt TDPs and above, the 6800M can push a laptop to its limits. Thanks to AMD SmartShift, which leverages machine learning algorithms to match the workload with the power requirements, the 6800M can be boosted up to 15% by shifting some of the processor power budget over to the GPU. 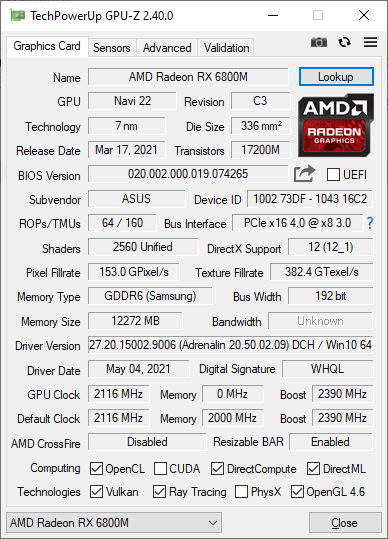 Thanks to the RDNA2 architecture, the Radeon RX 6800M also gets new features such as hardware ray acceleration, and variable rate shading. The former will improve visuals on games that support it, while the latter will improve performance by reducing the shading effort on portions of the image where it is not important, while keeping the full visual fidelity where the player will notice it. As both features require developer support, this won’t impact all games, but partially thanks to AMD’s win in the console space, features like variable rate shading already are available in some titles.

The Radeon RX 6800M features 40 compute units, with a 2300 MHz frequency. It also is able to be switched off when not in use, which is very important for a notebook, and AMD claims a near 0-Watt power level when in the disabled state. There is also 96 MB of Infinity Cache, which is a global cache for fast data access at lower power levels. In addition, AMD offers Smart Access Memory, which requires a Ryzen 3000 or Ryzen 5000 processor, and allows the CPU to bypass the typical 256 MB limit per transaction.

Although similarly named to the desktop counterpart, the Radeon RX 6800, AMD, like NVIDIA, has to deal with far more constrained thermals in the notebook form factor, which limits TDP much more than the desktop cards, which can draw 300+ Watts on their own. AMD focuses the 6800M on the 145-Watt and over range, and targets the GPU at 2560x1440 resolution panels. The review unit AMD sent is just a 1920x1080 panel though, albeit a 300 Hz refresh rate FreeSync IPS LCD. A device such as this would target the lowest latency for e-sports and the like, since the Radeon RX 6800M is really too much GPU for this resolution as we will see shortly.

As usual, we’ll kick off with some synthetics, then move on to some gaming tests. 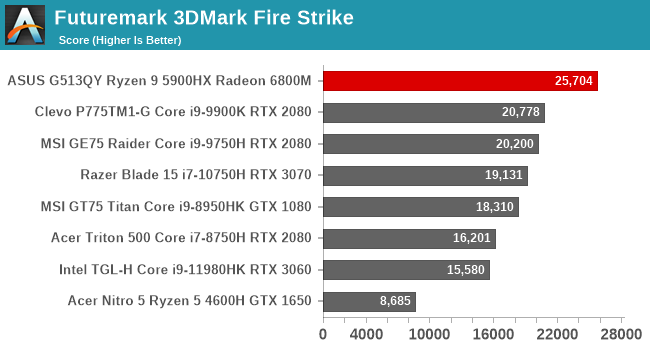 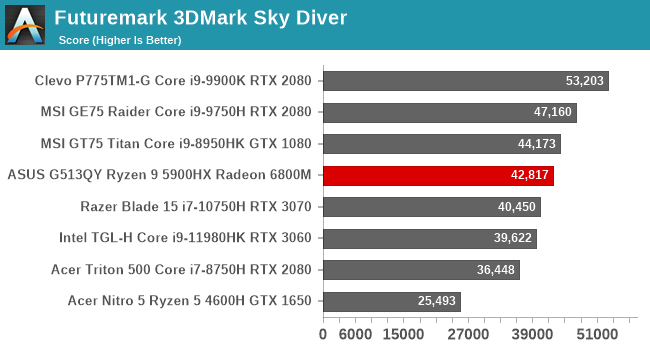 UL’s 3DMark offers several workloads with varying levels of complexity. Generally, as the workload gets less complex, it becomes more CPU bound. The ASUS Strix G513QY demolishes the competition in the most complex test of this suite, Fire Strike, but then falls back as the workloads get lighter and the CPU comes more into play. 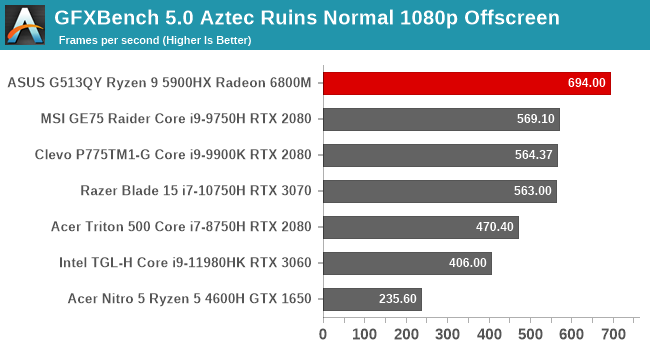 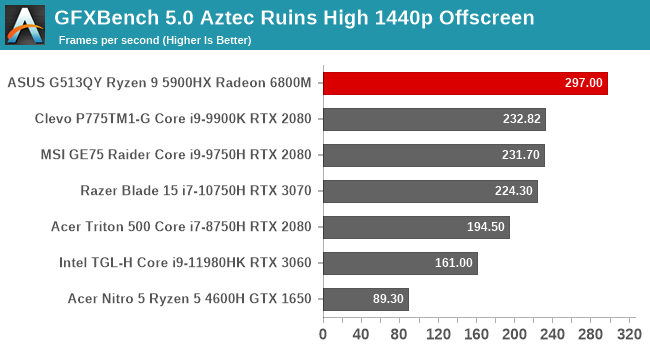 With version 5.0 of GFXBench, Kishonti added DirectX 12 workloads to their suite, which are the two we run. GFXBench is geared towards lower-powered devices, including tablets, so running them on a GPU such as this is more academic than useful, but as it is part of our normal suite, it was run here as well, and unsurprisingly the Radeon RX 6800M had no issues with such a small amount of work. 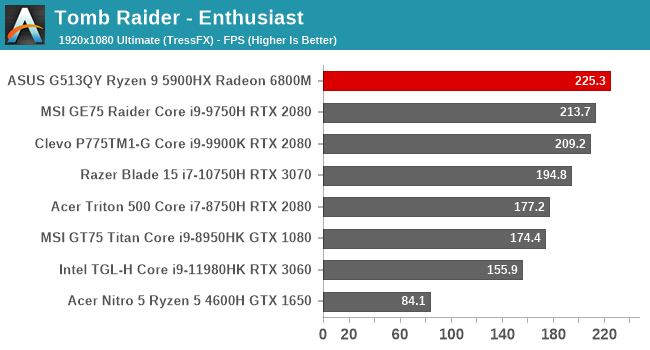 Although an older game, we keep Tomb Raider around mostly for the integrated graphics solutions, so it should be no surprise that the ASUS G513QY crushes this benchmark. Enjoy the 300 Hz display, because it will get a workout here.

Rise of the Tomb Raider 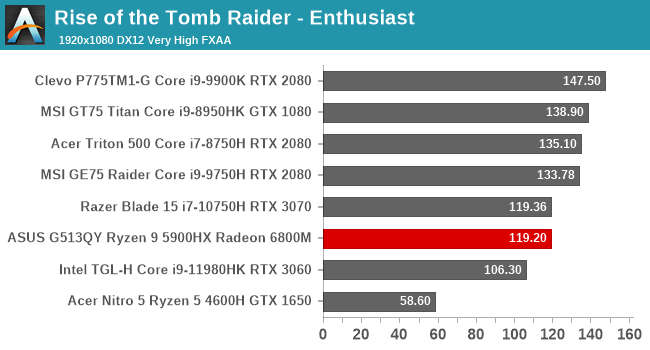 The second installment in the Tomb Raider franchise increased the visuals significantly, which results in a much more stressful test, but here the Radeon RX 6800M does not really do overly great in the DirectX 12 mode. Likely at this resolution, the benchmark is 100% CPU bound.

Shadow of the Tomb Raider 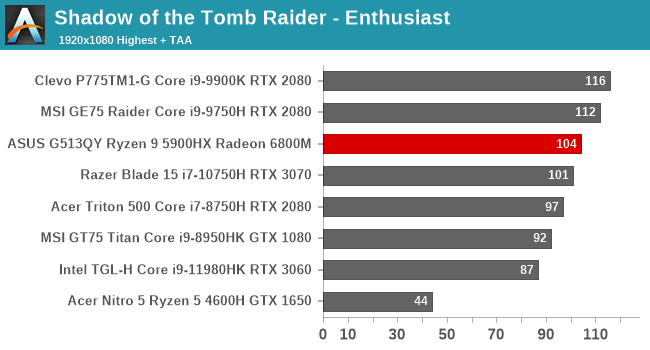 One of the best aspects of the Shadow of the Tomb Raider benchmark is that it outputs the percentage of how often the framerate was GPU bound. It very much confirmed the previous data points here, since at the 1920x1080 resolution with everything set to its highest level in terms of fidelity, the benchmark was GPU bound 0% of the time. Translating that, it means that in fact, the 6800M is 100% CPU bound on these tests.

One of the newer titles to our suite is Strange Brigade, and the DirectX 12 title offers a wide range of performance levels, allowing it to be played on anything from integrated graphics, all the way up to top-tier GPUs. Although likely CPU bound again, the 6800M is still very fast. 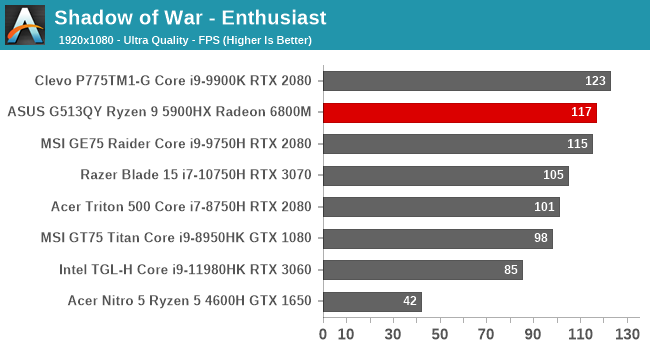 In a theme that seems to keep repeating itself, the ASUS Strix G513QY continues to not really set itself apart from the competition at this resolution. It still does well but is clearly being held back. 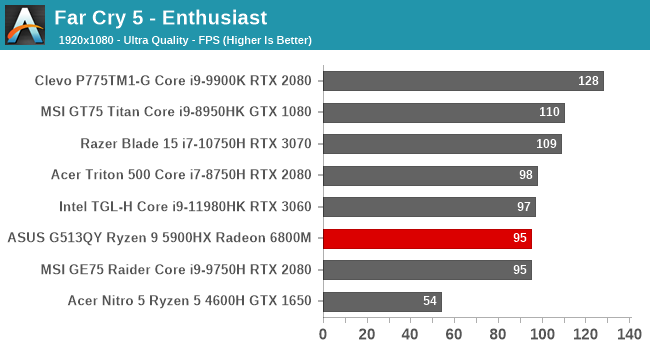 In what may be the most CPU-bound game in the suite, it is probably no surprise to see the ASUS where it is.

Although the ASUS G513QY is offered with a 2560x1440 panel, and almost certainly that would be the correct one to go with for this system, AMD sent us the 1920x1080 panel for the review, and that is a shame. There is a lot of performance left on the table. To see just how capable the GPU is, it was plugged into an external UHD monitor and some of the workloads were re-run.

Remember Shadow of the Tomb Raider saying it was GPU bound 0% of the time at 1920x1080? At UHD it was 77% of the time GPU bound. That is more like it. At the highest settings, most of these games can hit 60 FPS average even at 3840x2160, and a game like Shadow of the Tomb Raider would just need some tweaks to the settings to achieve that as well. The Radeon RX 6800M is really one of the first laptop GPUs that could power a UHD panel, and yet the unit it ships in is a 1920x1080 resolution, offering just one quarter of the pixels.

AMD targets the Radeon RX 6800M at 2560x1440, and for good reason. As we have seen, in pretty much every title, it is completely CPU bound at 1920x1080, even with the newest Ryzen 9 5900HX as the processor. The synthetic tests, as well as the UHD resolution results, really prove this point.

Although there is certainly a market where the 1920x1080 resolution is desired for the lowest latency, in this system, that panel is really too low of a resolution for such a powerful GPU, and it becomes wasted money spent.