As the successor to the Surface Book, the Surface Laptop Studio builds on that heritage by continuing to offer a reasonably powerful GPU in a small form factor laptop. Although not a gaming laptop by any stretch, the NVIDIA GeForce RTX 3050 Ti Laptop graphics is a stout GPU for a notebook of this size. Microsoft also continues the tradition of the Surface Book by also offering a model without the dGPU, which they have found has been popular in certain segments such as education where the dGPU is not needed.

Microsoft provided the Core i7 model for review, which comes with the discrete GPU option, so that will be the focus of this review. 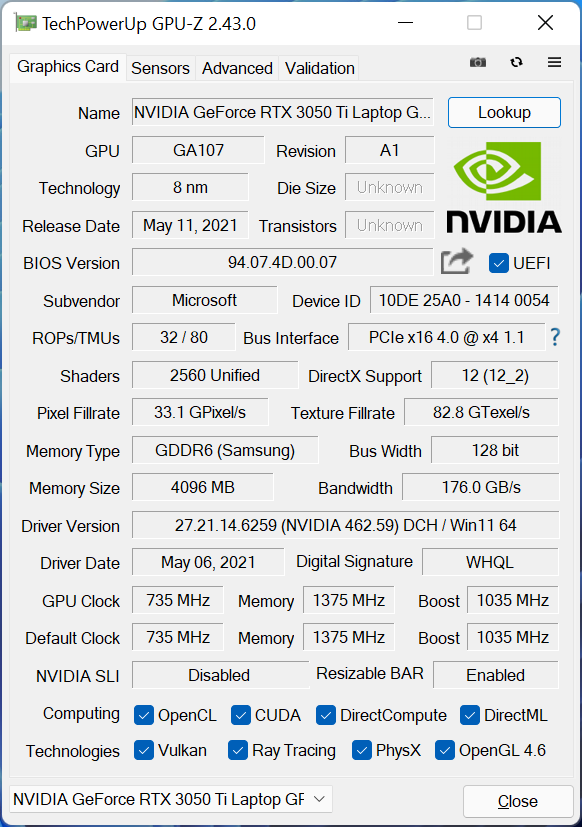 The NVIDIA RTX 3050 Ti was announced earlier this year and features 2560 CUDA cores. The 128-bit memory bus clearly puts it at a disadvantage compared to the RTX 3060/3070/3080, but the lowered TDP means that it fits into smaller and lighter devices, such as the Surface Laptop Studio. Built on the 8 nm Samsung process, this Ampere-based GPU brings all the latest RTX features to the Surface Laptop Studio with 80 tensor cores and 20 ray tracing cores and is the first time Microsoft has fitted an RTX GPU into one of their devices since the Surface Book 3 was outfitted with the GTX 1660 Ti.

To see how the Surface Laptop Studio performs in graphical tests it was run through our laptop gaming suite. Please note that we have recently updated the suite with several new games, so until we test more devices there are limited results on those new titles.

As usual, we will start with some synthetic tests, then move on to gaming results. 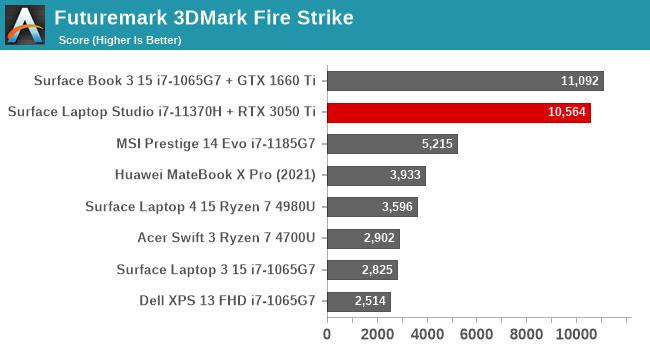 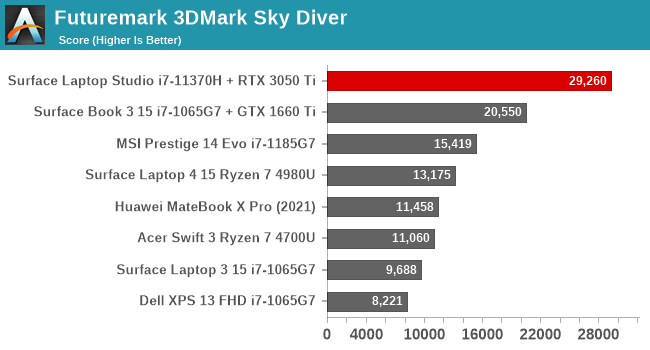 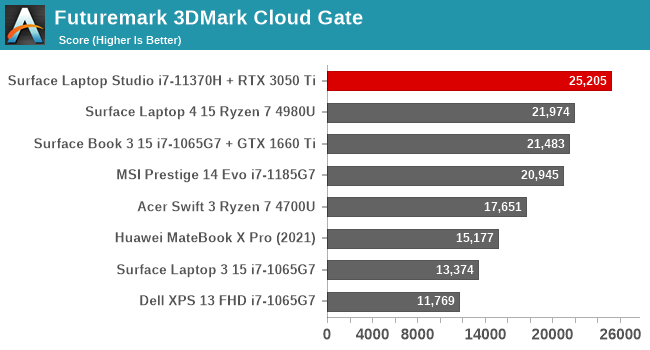 GFXBench 5.0 includes DirectX 12 tests for Aztec Ruins, and as a multi-platform test it is quite a light workload for any laptop with a discrete GPU. Again, the Surface Book 3 slightly outperforms here. 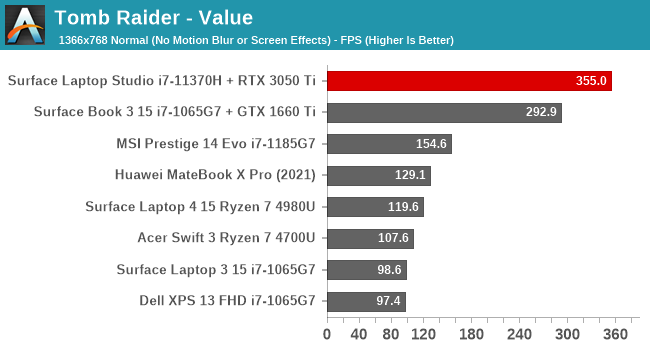 In our first gaming benchmark the Surface Laptop Studio does surpass the Surface Book 3, although not by a wide margin on the 1920x1080 resolution.

Rise of the Tomb Raider 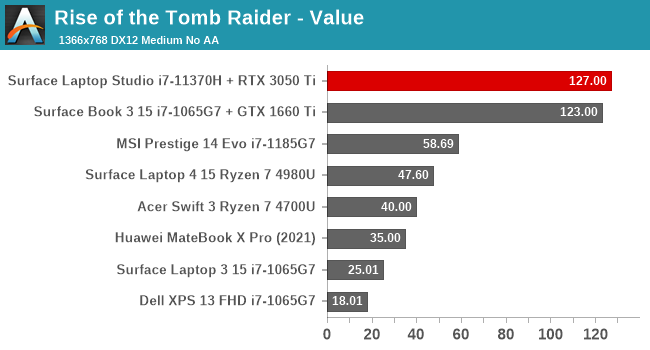 Much like Tomb Raider, performance is nearly identical between the Surface Book 3 and the Surface Laptop Studio. The GTX 1660 Ti is still able to hang with Ampere.

Shadow of the Tomb Raider 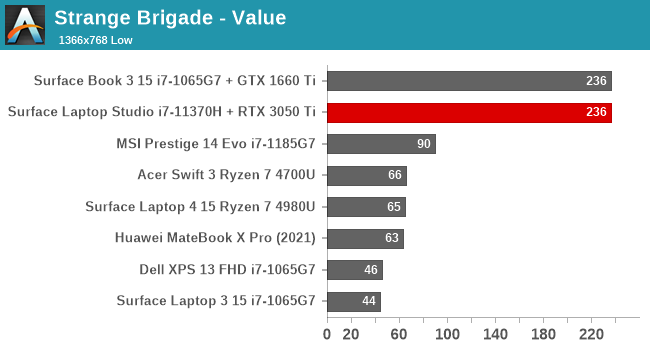 Strange Brigade has a wide range of playable settings, allowing it to be played on integrated GPUs right up to the biggest GPUs around. The Surface Laptop Studio and Surface Book are again in a dead heat.

Again we can see that the beefier GPU in the Surface Book 3, despite being a generation older, can still outperform Ampere. The GTX 1660 Ti offers more memory bandwidth and more ROPS than the RTX 3050 Ti, so it is not a huge surprise. Add in the higher TDP offered in the Surface Book and it makes sense why it can stretch ahead on the more demanding workloads.

Far Cry is a very CPU bound game, and as such the Surface Laptop Studio is able to stretch ahead here in the value settings, and keep pace in the 1920x1080 benchmark.

New Games to the Suite

For 2021 the gaming suite is being revamped, but as we only have scores from the Surface Laptop Studio, they will be presented here without any comparisons.

Microsoft calls the Surface Laptop Studio their most powerful Surface yet, and you can argue that is true of the system as a whole. On the GPU side though, the outgoing Surface Book 3 offered a more powerful GPU which offered more memory bandwidth, more ROPs, and more physical memory. It was of course able to do that because of the unique nature of the device, where the GPU got its own thermal zone in the laptop base. At best, the Surface Laptop Studio is just about as capable on the GPU front, although of course with the added benefit of the RTX architecture for Tensor and Ray Tracing abilities.

The RTX 3050 Ti is still a capable upgrade over integrated graphics, but certainly is not in the same league as the larger GPUs, especially at the power limits enforced on it in this design.