Sony has a track record for switching chipsets as they move along from model to model. The DRU-540A used the same Sanyo chipset that is used in the PX-712A. Upon entering the 16x game, Sony switched to MediaTek as its supplier for the servo controller and analog signal processor for the DRU-710A/720A units. Now, Sony has changed their chipset to that used in BenQ’s DW1640 as well as Plextor’s PX-740A.

This may turn out to be a good thing, since the DW1640 and PX-740A drives performed very well in all areas. But we all know that the performance of a drive depends on not only its hardware, but also its firmware. The DRU-810A comes with the 1.0a firmware, which is also the latest and the one that we used in our testing. 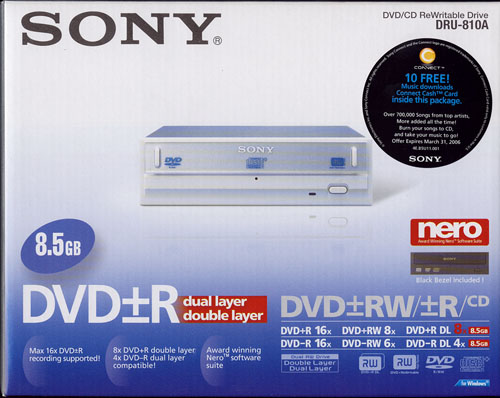 Past Sony drives have not done so well with our line of test media. The DRU-710A had been burning DVD+R double layer coasters during our Fall 2004 16x DVD roundup, and in our Summer 16x DVD roundup, the DRU-720A performed better than the DRU-710A, but not well enough to earn it a Top 3 spot on our list.

With this new chipset, we see good things for the DRU-810A. Enough of this jabber - on to the benchmarks…