"It takes a long time to bring excellence to maturity."

This maxim by improvisatore and Latin writer Publilius Syrus expresses our thoughts on the third-generation Raptor from Western Digital. This latest release in the Raptor series comes almost three years after the original Raptor WD360GD was launched.

The original Raptor was launched as the WD360GD in March of 2003 with an enterprise level 10,000 RPM spindle speed, SATA interface, 8-Megabyte buffer, 5.2 millisecond read seek time, and a single-platter design featuring 36 gigabytes of storage. While it shined in single-user performance, the drive did not fare well against its SCSI based competitors in the enterprise server market for which it was designed. It's already small size and complete lack of command queuing abilities delivered performance that was not on par with the SCSI based drives in the critical multi-user applications. However, due to the lack of entry level SCSI drives, a growing interest in SATA components, and a very avid computer enthusiast market, the drive was able to succeed until its replacement arrived.

The next version of the Raptor was launched as the WD740GD in December of 2003 and boasted several needed enhancements. These enhancements included the addition of another platter that increased the capacity to 74-gigabytes, 4.6 millisecond read seek time, a FDB based motor to address noise concerns, and ATA-4 tagged command queuing. While TCQ was a welcome addition and certainly improved the drive's I/O operations, it still was not a match for most SCSI drives in the enterprise market. This was primarily due to a lack of SATA controllers that fully supported TCQ and firmware as mature as the SCSI competition.

However, this drive was consistently and, in some cases, continues to be one of the fastest single-user performance drives available. The computer enthusiasts flocked to the drive due to its performance advantages, but the drive continued to have limited success in the enterprise server market. In a nod to the success of the drive in the computer enthusiast market and acceptance of its importance, Western Digital offered the drive in retail stores for a short time. Over the course of the last two years, the drive has been enhanced with minor revisions with the latest version, WD740GD-00FLC0, receiving tweaks that have improved its performance mainly in single-user applications. Although the drive's capacity is dated compared to the newer 300~500 gigabyte SATA drives, its price-to-performance factor is now attractive. 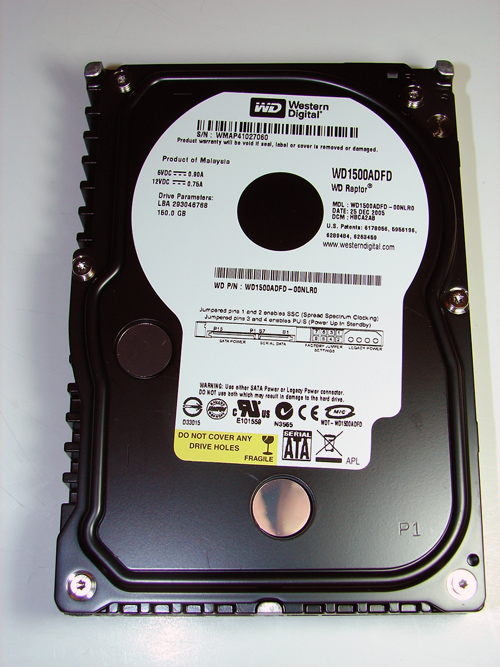 The latest version of the Raptor was launched as the WD1500ADFD in January of 2006 with a significant list of improvements. The drives still sports the 10,000 RPM spindle speed, 4.6 milli-second read seek time, and a two-platter design now at 150-gigabyte capacity. The platter's density has been increased to 75-gigabytes and equals those of its 10,000 RPM SCSI competitors. The buffer size has been doubled to 16 megabytes, matching the latest offerings from other drive manufacturers. The Marvell 88i8030 PATA to SATA bridge chip used on the previous two Raptors has been finally dropped in favor of a native SATA implementation. This native SATA implementation brings with it Native Command Queuing instead of the legacy firmware level Tagged Command Queuing. While the impact of NCQ can have a favorable impact in multi-user applications, it can create a performance penalty in single-user applications. Since the drive is still targeted towards the server market, it retains the first generation 150 MB/sec SATA interface instead of the 300 MB/sec SATA interface found in the newer consumer level drives. The reason for this extends to Western Digital's reluctance to use the newer electronics at this time in a server-level drive until they have been thoroughly tested and approved in an enterprise environment. However, it is almost a moot point as the current SATA drives available have not approached sustainable bandwidth operations anywhere near the 150 MB/sec interface.

Like the recently released Caviar RE2 WD4000YR drive that is based on the latest Raptor platform, this drive supports Time Limited Error Recovery and Rotary Acceleration Forward Feed operations. TLER allows the drive to signal the RAID host adapter in the event an error recovery process has exceeded time out parameters. This prevents false drive dropouts on the host adapter when utilizing RAID level 1 or above configurations. Although TLER is disabled by default, a utility might be available in the future from Western Digital to enable TLER. RAFF is an electronics feature that senses rotational vibration in a multi-drive setup and then compensates for it by controlling the drive head location. This feature is designed to keep read and write operations consistent, thus avoiding time consuming retries by the drive that could impact performance. 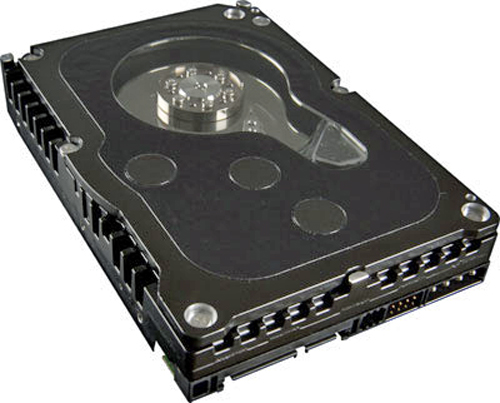 During the development of the WD1500 platform, Western Digital decided to acknowledge the importance of the computer enthusiast market that has made the Raptor series successful by developing the Raptor X model. The drive's model designation is WD1500AHFD and will be available shortly.

Thus, Western Digital will have two different models of basically the same drive in the market place. The WD1500ADFD will be primarily targeted as an entry-level alternative in the enterprise market with the WD1500AHFD being targeted to the computer enthusiast and gaming user.

The Raptor X model differs cosmetically from its parent by offering a transparent cover over the spindle and platter section of the drive. The cover was designed from a special grade of crystalline polycarbonate with a unique ESD-dissipative coating. The combination of this cover and the conductive frame design will protect the read/write heads from potentially damaging static discharge.

Let's see how the newest Raptor performs against other SATA based drives.