Hitachi Deskstar 7K1000 in RAID 0: Is Two Terabytes really better than One? 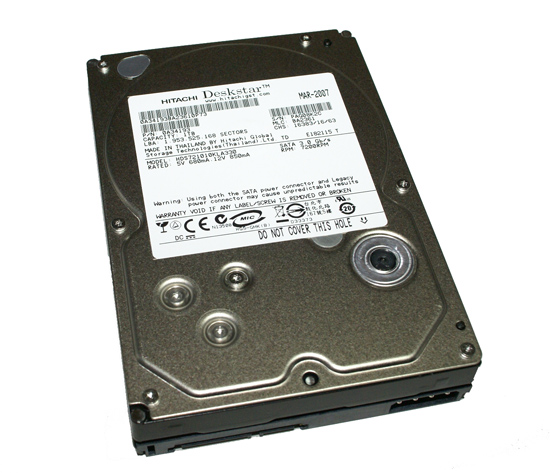 The external design of the Hitachi 7K1000 is the same as the majority of the TK or K series drives. The drive is based on the industry standard 3.5" form factor platform with the pertinent part number and warranty information embossed on a white sticker on the top of the casing. Our OEM sample was graciously provided by Dell and does not include this information, but looking at the retail label we did not miss anything of importance. The only other differences between the OEM and retail units is the inclusion of an accessory cable kit, HD Feature Tool software (that can be downloaded separately), and the obligatory retail box. 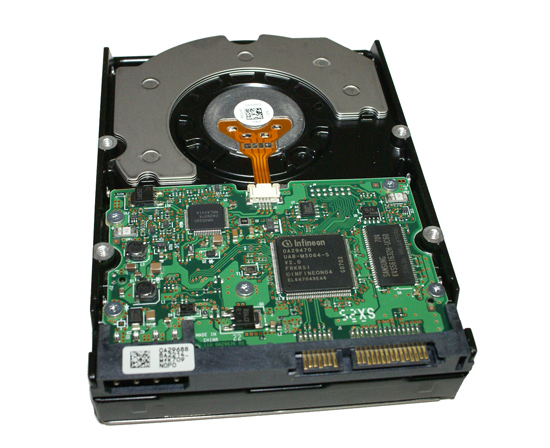 The Deskstar 7K1000 ships with Serial ATA data and power connectors along with a 4-pin Molex power connector designed for use with older ATX power supplies. Our OEM unit did not contain the 4-pin Molex power connector, but the retail model has it. The 32MB of cache memory and controller logic is located on the outer side of the PCB with the same components being utilized on each version of the drive. Our retail drive arrived with firmware revision GKA0A51D compared to GKA0A51C. We did not notice any measurable differences in performance between the two drives.


The Hitachi Deskstar 7K1000 is the first 1TB drive to ship based upon manufacturer's specifications with a 750GB offering scheduled for release in the upcoming weeks. Of course the actual capacity of the drive is 931.5GB, but due to the way manufacturers report capacity the drive is considered to be a 1TB offering. If we want to be technically accurate, 1TB = 1,000,000,000,000 bytes and 1TiB (Tebibyte) = 1,099,511,627,776, so the formatted capacity is 931.5GiB (Gibibytes). This drive is also Hitachi's first 3.5" hard drive to use PMR technology. Additional 1TB versions for the Enterprise and DVR/Set-Top markets will be released later this year.

The 7K1000 features a 5-platter/10-head perpendicular magnetic recording design with rotational speeds of 7200 RPM. The cache size has been increased to 32MB from the previous 16MB on the TK series. Hitachi includes their ramp load/unload, advanced low-power idle modes, and thermal-fly height control technologies. This drive series also supports Native Command Queuing and hot-swap capabilities. The Hitachi Deskstar 7K1000 drives ship with a three year warranty and additional specifications can be found here.

The Hitachi 7K1000 drives we are reviewing today will be compared directly against the WD WD1500AHFD 150GB drives in RAID 0 with a limited benchmark test suite. Our stripe size is set to the recommended default in the NVIDIA driver set, which in this case is 64KB. We fully understand that different stripe and allocation sizes may result in possible improvements in performance based upon the application being tested, but testing these aspects is beyond the scope of this article.

We have also included a subset of drive results from our previous articles and will provide additional RAID 0+1 and 5 results of the 7K1000 in our upcoming RAID performance overview that will also feature Intel chipsets and hardware controllers. Today's article also contains results in our iPeak and Application benchmarks with AAM on / NCQ on as the default score and AAM off / NCQ on as the alternate score for the 7K1000. In a couple of benchmarks we noticed results with AAM off / NCQ off provided additional performance increases of around 1% but our recommendation with the drive is to leave AAM and NCQ on for the best blend of performance and acoustics.