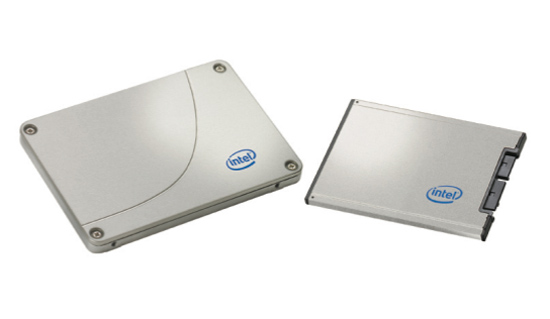 Overall it’s an evolution of the X25-M, and not a revolutionary new design. The focus of the evolution is definitely price. Intel wants the X25-M to be used, not only at the high end, but even in mainstream PCs. At $225 for an 80GB drive, the new X25-M is currently cheaper than most Indilinx based drives on the market:

There’s going to have to be a price correction from the competition. We may also see more manufacturers branching out to different flash memory vendors to remain price competitive (similar to what OCZ did with the Agility line).

The major differences between the 1st and 2nd gen X25-M are highlighted in the table below:

The move to 34nm gives Intel the ability to both decrease costs and increase capacity. It now costs Intel the same to make a 160GB drive as it used to cost to make an 80GB drive, and about half to make an 80GB drive. Given the current cost structure, I’d say there’s still more room for Intel to drop prices but there’s just no need to given the competitive landscape. 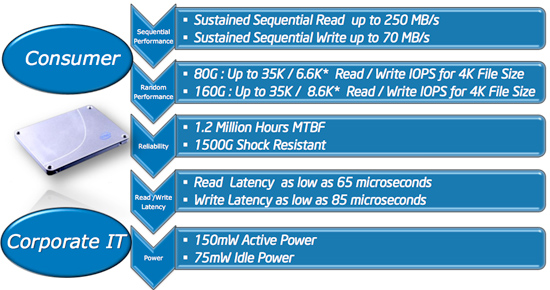 The performance of the new drives is improved. Read and write latency are both improved by around 30%. These figures are for a single sequential operation, so you're looking at best case performance improving on the drive. Intel also tweaked the controller and its firmware to further improve performance; the result is much faster 4KB random writes on the new drives. 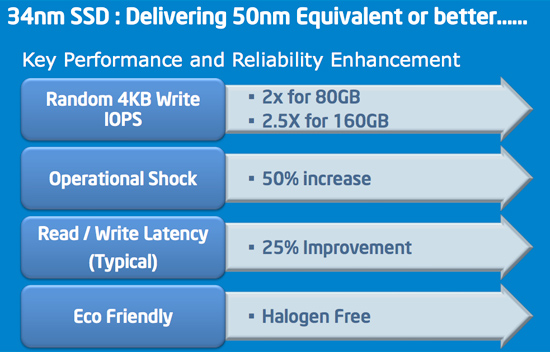 The real world benefits are difficult to predict. If you're running an I/O intensive app on the desktop then you'll see a definite improvement from the new drive. More typical desktop/notebook workloads probably won't see a tremendous difference between the 1st and 2nd gen drives. Large file sequential read/write speed remains unchanged and although there have been tweaks to the controller’s algorithms, the overall architecture hasn’t changed either.

I’ll be able to confirm for sure when I get a drive this week.

There are two other specifications that have changed, one for the better and one for the worse with the new drive:

Load power hasn't changed between the drives, they are both at 150mW. Idle power went up by 10mW thanks to the new controller. These are "typical" values while running MobileMark 2007, so I'm not sure if things change at all if you're looking at real world workloads. Intel claims that the new drive doesn't deliver worse battery life than the old one, but I'll have to verify.

The maximum amount of operational shock that the 34nm drive can take went up by 50%; 1500Gs for 0.5 msec sure seems like a lot. I'm not sure if anything changed internally to allow for this higher rating or if it's simply the result of better manufacturing/improving production.

A little known fact about the original X25-M was that its controller wasn’t Halogen-free. Because Intel used Halogens in the first controller, companies that had strict environmental restrictions (e.g. Apple) wouldn’t touch the drives. 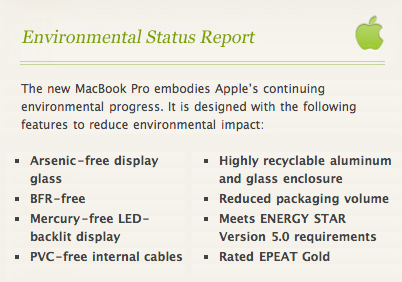 Apple couldn't claim BFR-free on its new MacBook Pro if it used Intel's 1st gen X25-M. Bromine is a Halogen.

The new drive has a new controller and it is Halogen free. For Apple to glance over the X25-M in its mobile lineup now would be a serious mistake.

How to Tell the Drives Apart

Despite the price drop and internal changes, Intel is still calling these things the X25-M and X18-M. So how do you tell the new drives apart from the old ones? It all comes down to the part number; if the last two digits are a G1 then it’s the old drive, if they are a G2 it’s the new one. If you have them in hand, the new drives are silver, the old ones are black.

TRIM Support: Not For 50nm Drives

Part of today’s announcement is the fact that Intel will enable TRIM on these 34nm drives when Windows 7 ships. Intel is planning on releasing a user downloadable firmware update that will enable TRIM support. Windows Vista and XP users will get a performance enhancement tool that presumably will just manually invoke the TRIM command. I suspect that Intel is waiting until Windows 7 to enable TRIM support is to make sure that everything is thoroughly tested. As we’ve seen with other attempts to enable TRIM, it’s a tricky thing to do.

The disappointing part of the announcement is that there’s no TRIM support for the first gen 50nm drives. As far as I can tell, this isn’t a technical limitation of the drives, but rather something Intel is choosing to enable only on the 34nm products.

I'm still waiting on my 34nm review sample, as soon as I get it I'll start working on a full review. I've already started work on the newest SSDs from the competition, so expect something soon.