DRAM is very fast. Writes happen in nanoseconds as do CPU clock cycles, those two get along very well. The problem with DRAM is that it's volatile storage; if the charge stored in each DRAM cell isn't refreshed, it's lost. Pull the plug and whatever you stored in DRAM will eventually disappear (and unlike most other changes, eventually happens in fractions of a second).

Magnetic storage, on the other hand, is not very fast. It's faster than writing trillions of numbers down on paper, but compared to DRAM it plain sucks. For starters, magnetic disk storage is mechanical - things have to physically move to read and write. Now it's impressive how fast these things can move and how accurate and relatively reliable they are given their complexity, but to a CPU, they are slow.

The only reason we put up with mechanical storage (HDDs) is because they are cheap, store tons of data and are non-volatile: the data is still there even when you turn em off.

NAND flash gives us the best of both worlds. They are effectively non-volatile (flash cells can lose their charge but after about a decade) and relatively fast (data accesses take microseconds, not milliseconds). Through electron tunneling a charge is inserted into an N-channel MOSFET. Once the charge is in there, it's there for good - no refreshing necessary.

N-Channel MOSFET. One per bit in a NAND flash chip.

One MOSFET is good for one bit. Group billions of these MOSFETs together, in silicon, and you've got a multi-gigabyte NAND flash chip.

The MOSFETs are organized into lines, and the lines into groups called pages. These days a page is usually 4KB in size. NAND flash can't be written to one bit at a time, it's written at the page level - so 4KB at a time. Once you write the data though, it's there for good. Erasing is a bit more complicated.

To coax the charge out of the MOSFETs requires a bit more effort and the way NAND flash works is that you can't discharge a single MOSFET, you have to erase in larger groups called blocks. NAND blocks are commonly 128 pages, that means if you want to re-write a page in flash you have to first erase it and all 127 adjacent pages first. And allow me to repeat myself: if you want to overwrite 4KB of data from a full block, you need to erase and re-write 512KB of data.

To make matters worse, every time you write to a flash page you reduce its lifespan. The JEDEC spec for MLC (multi-level cell) flash is 10,000 writes before the flash can start to fail. 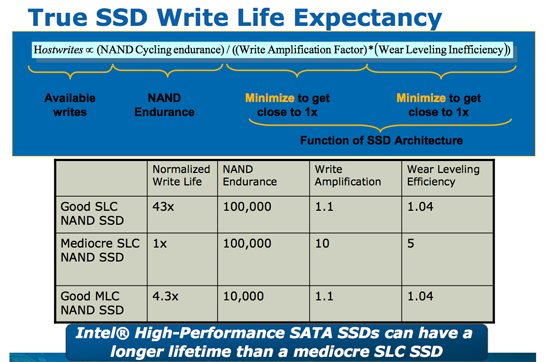 Dealing with all of these issues requires that controllers get very crafty with how they manage writes. A good controller must split writes up among as many flash channels as possible, while avoiding writing to the same pages over and over again. It must also deal with the fact that some data is going to get frequently updated while others will remain stagnant for days, weeks, months or even years. It has to detect all of this and organize the drive in real time without knowing anything about how it is you're using your computer.

It's a tough job.