This all took place a few months ago. Two things have happened since then. Intel has, as expected, launched its value SSD: the X25-V. This is basically the Kingston drive we reviewed last year, but with official TRIM support. In other words, it’s a X25-M G2 but with only half the channels populated with IMFT NAND. The X25-V is available only in a 40GB capacity (we’ll see an 80GB version based on 25nm NAND in Q4 2010). The drive is priced at $125 and available today. On a side note, Intel’s pricing shows that there wasn’t any room for Kingston to deliver a sub-$100 version of the X25-V. 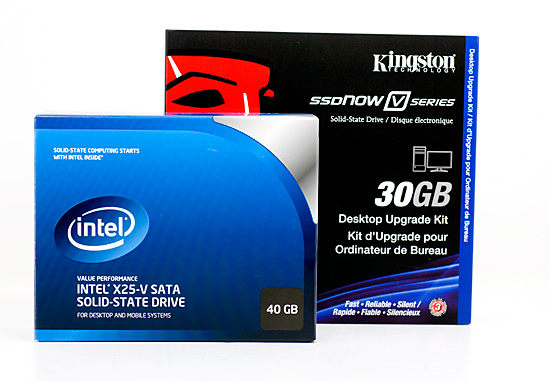 The second thing to happen was that Kingston built another V Series Boot Drive, this time based on a Toshiba controller with 32GB of MLC NAND on board. The price? $124.99 for an upgrade kit. Kingston appears to be going head to head with Intel in the value SSD space. Ballsy. Update: Kingston has pointed out that despite the $124.99 MSRP, Newegg is currently selling the drive for $114.99 with an additional $30 mail in rebate that will drop the total price to $84.99 after rebate.

Meanwhile, OCZ recently announced its Onyx SSD based on a newer low cost Indilinx controller. The target price? Sub-$100. Unfortunately we’ll have to wait a little longer on it as the final firmware is still being ironed out. Instead, today’s comparison takes place exclusively at $125 and is between Intel and Kingston. Former bedmates, the two now have equally compelling entry-level SSD offerings.